“Many that live deserve death. And some that die deserve life. Can you give it to them? Then do not be too eager to deal out death in judgement. For even the very wise cannot see all ends.”

The news of Robin Williams‘ death was especially hard on me, more so than any other death in Hollywood to date. I adored Robin as an actor.

I grew up watching “Mork and Mindy” and “Mrs. Doubtfire” like everyone else my age. Robin also played a starring role in four of my very favorite movies: “The Birdcage,” “What Dreams May Come,” “Dead Poets Society,” and “Good Will Hunting.”

So naturally, he was a beloved celebrity in my world. But his passing was also harder for another big reason—Robin’s death marked another amazing talent claimed by the darkness that is mental illness. Cross another one off the list, which has grown longer and longer as my years have accrued.

I’ve gotten to know the inner demons of severe depression and addiction very well over the 34 years I’ve graced this earth. Most people know I don’t drink alcohol, and most people know why. Some people know I’ve dealt with depression since my preteen years, but only a choice few know that I committed suicide in the summer of 2007.

Because I did, you know. This was no cry for help. I full-on checked out. I even remember the point in which I clinically died. I also remember being violently pulled away from that place and thrown back here. I didn’t want to come back at first. I was ready to be done. But something or someone I can’t quite describe in the vocabulary available to me fought like hell to make sure I was brought back.

I spent the next three months of that summer in the hospital attached to all sorts of machines, trying to figure out what to do next. Should I try again? Should I choose to pick myself up and live? Could I even muster the strength if I wanted to?

Somewhere along the line, I chose life again. I think that’s the only reason I walked out of that hospital. Lots of people weren’t sure I would. That was then, and this is now, though. I seek no pity. I have owned my darkness and allowed it to fuel and strengthen me. I have learned to see every step of my journey here as a gift—from the beautiful and joyous, to the insane and stupid. It all strengthens the experience.

What plagues me today, in hearing some comments about the death of Robin Williams, is the amount of anger I can sense from some. That is the hardest for me to hear, because I know, I’ve been there. Many people were so angry at me for what I did. Where they saw it from their perspective—as a selfish act that hurts many—I saw it from mine, as the only option to escape the hell and darkness that plagued me enough to bring me to that point.

It’s not easy to get to that point. When someone does, rest assured they’ve been through a lot. It’s even harder to get to a point where you believe in your heart and soul that the very best thing for the world would be to remove yourself from it. Because that’s what I believed. I thought I was doing the world a favor.

Have you been at that moment? Have you swallowed the pills, pulled the trigger, and felt the life drain from your body at your own hand? Have you tasted the coldness of death as your heartbeat fizzled and stopped allowing your body to function? Can you honestly say you have? If not, do you think, perhaps, your vantage point may be skewed?

Here’s my thoughts on this, and please—take them for what they are—an opinion and another viewpoint. I don’t proclaim that any of this is “right” or “better” than anyone else’s opinion. These are simply the things I feel inside, and I would be honored if you would open your mind to take them in enough to simply feel where they may be coming from.

I feel that the only people we are equipped to judge in this life are ourselves. Leave the judgment at the door with people and have some compassion for those suffering, in all shapes and forms. Judgments are not our place and do nothing but make things worse and feed darkness as a whole. Who amongst us is without shadow? Darkness? Who are we to draw a line in what is bad or worse in terms of “sin”?

I would judge you for this, but you see, it’s not my place to judge. Perhaps that job belongs to someone or something much more powerful and great than any human alive can begin to wrap their head around. Perhaps it doesn’t, but perhaps it does. Does it really matter? Isn’t what really matters the here and now, and what we choose to do with the small fraction of time given inside this body, in this life?

Why don’t we all try to come from a place of light and love? Why don’t we stop concerning ourselves so much with what everyone else is doing, and instead focus on the one person we can control in this world. Us. And take each choice the world presents to us as an opportunity to stop, breathe and consciously listen to the pull of what feels right to your soul? Which do you feed? The light or the dark? Let’s see where that gets us…and let’s stop pointing fingers. Turn the damn finger around to yourself, please. I know I do. Do you?

Robin, wherever you are, I hope you find your peace. I will think nothing but good thoughts about the gifts you brought to the world. 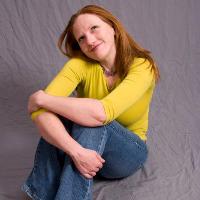