Photo: one of the Great Sculptures of Burning Man, in flames.

Burning Man is an environmental debacle. Walmarts & chains pillaged on the way in, dumpsters overflowing on the way out. Very little composting in. Leave no Trace is a superficial ethos (honored ironically only because of mandate by the government) that doesn’t acknowledge where it came from or where it winds up.

It is wonderful, mind-blowing, fun, life-changing, enlightened in some ways (community), sketchy in others (lots of sexual pushiness that wouldn’t hold up in #metoo era), and amazing. But it needs to serve as a container to guide our generations into environmental harmony, or at least awareness. 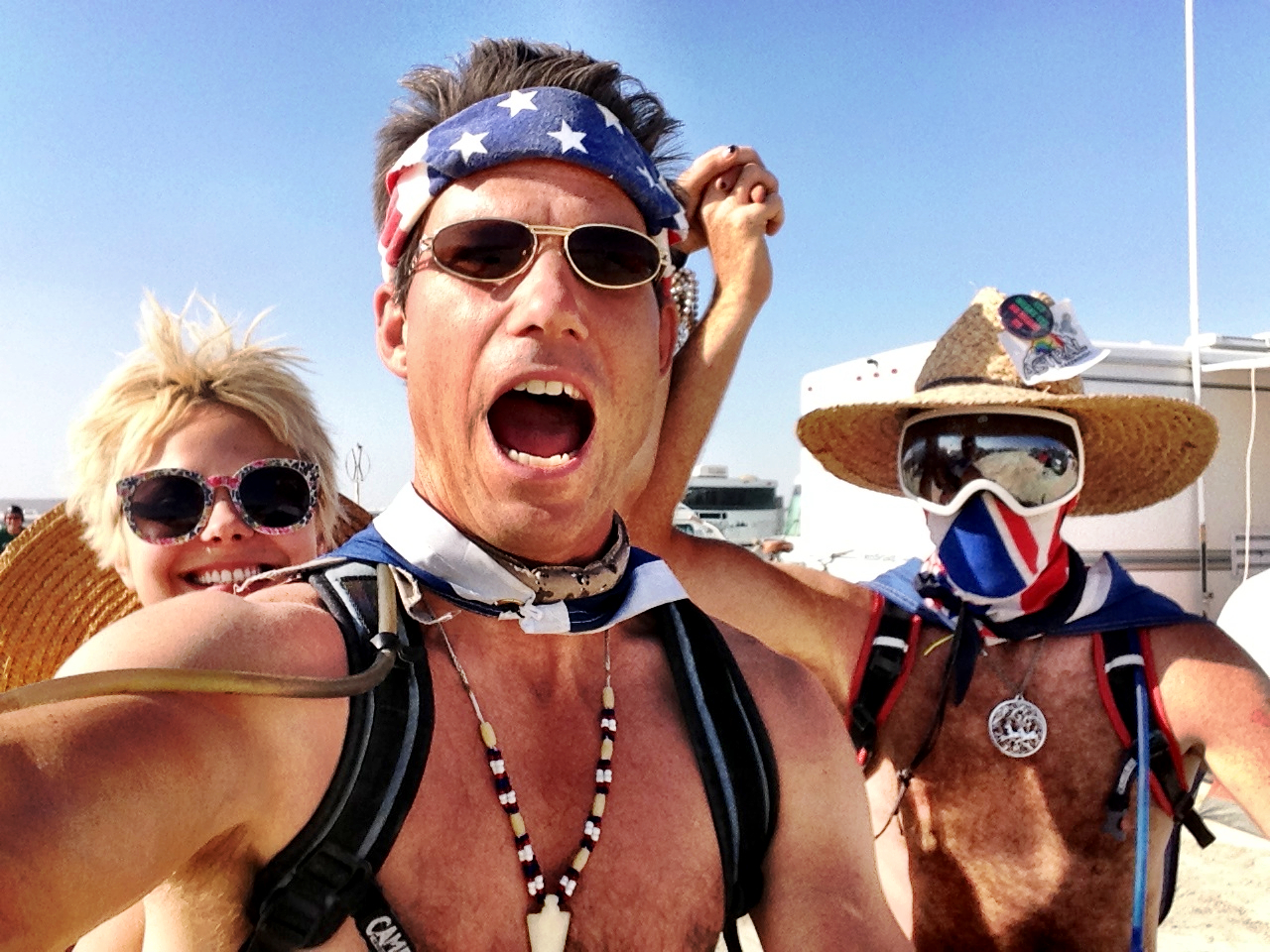 ~
That’s me on the right, with my dear heart Lina the plastic-hating filmmaker on the other side, and bestie Duzer in the middle.

See my videos from Burning Man, plus photos: bit.ly/2MA1e6t and bit.ly/2wdFF12

One of the main sculptures at Burning Man finale. Via Source. “Those hippies sure do love driving RVs hundreds of miles to watch carbon dioxide being released into the atmosphere.”

Note: Burning Man is radically inclusive, and there are all kinds. It’s impossible to generalize. That said, burning glue and plywood and rich folks flying private jets in and pillaging Wal Mart and such on the way in and filling every dumpster in Reno, etc. on the way out…it’s far from eco-responsible. Far from it.

To Burning Man’s….credit, it doesn’t claim to be green. From a moderator of Burning Man on Reddit:

It’s never been a green event. The leave no trace culture is basically part personal responsibility, part keeping the playa in good enough condition so the BLM let us use the space again.

Edit: Not sure why I got the downvote. Mod of /r/burningman here. So, I’m not just making it up.

Some people are green. But, the event itself isn’t. The amount of gas used, roads torn up and stuff wasted just to get there. Then on playa, people are constantly doing things like have giant a 25 foot octopus spit tons of fire every night all night. There’s no way you can call this a green event.

It’s a chance for people to get out there, have fun, enjoy the community and party. I’m just being realistic and not painting the event as something it’s not.

One of the main sculptures at Burning Man finale. (Via imgur.com) Comment via Source:

“This is not the finale, but was burned on Friday due to concerns that its lightweight exterior construction and the presence of strong winds this year would cause it to ignite accidentally were the man to be ignited first. It burned at around 7-8am on Friday morning and was totally worth staying up for.

This is called “the Embrace” and it was one of the most remarkable art installations on the playa this year. Both figures were made from a really solid internal framework that most resembles the support structure for a water tower. On top of this, the artist layered loads of this very thin wood planking that almost resembles birch bark. It is the material that is compressed and glued to together to make plywood.

The forced perspective in this image does not due justice to the size of this. The male figure was a good 3-4 stories tall, and both figures were entirely hollow. You could climb up/down the internal structure via helical staircases with the eyes being the highest reachable point.

The holes in the armpits and in the female figure’s back were created prior to the burn to improve airflow at the recommendation of the several fire safety experts on hand to supervise the burn. It was quite an experience to watch something so massive and beautiful just go up in flames. This image was captured at a particularly still moment. In reality, there were fairly strong winds gusting for the burn and the flames whipped off the back of the male figure’s head like fluid more than fire. The winds in combination with the statues’ positions and the heat of the blaze caused the burn to spit out fairly massive dust eddies while it incinerated.

EDIT: Forgot to mention, at night, the plastic/mechanical heart inside each figure glowed in brilliant colors while a motor gave the illusion of it beating.” 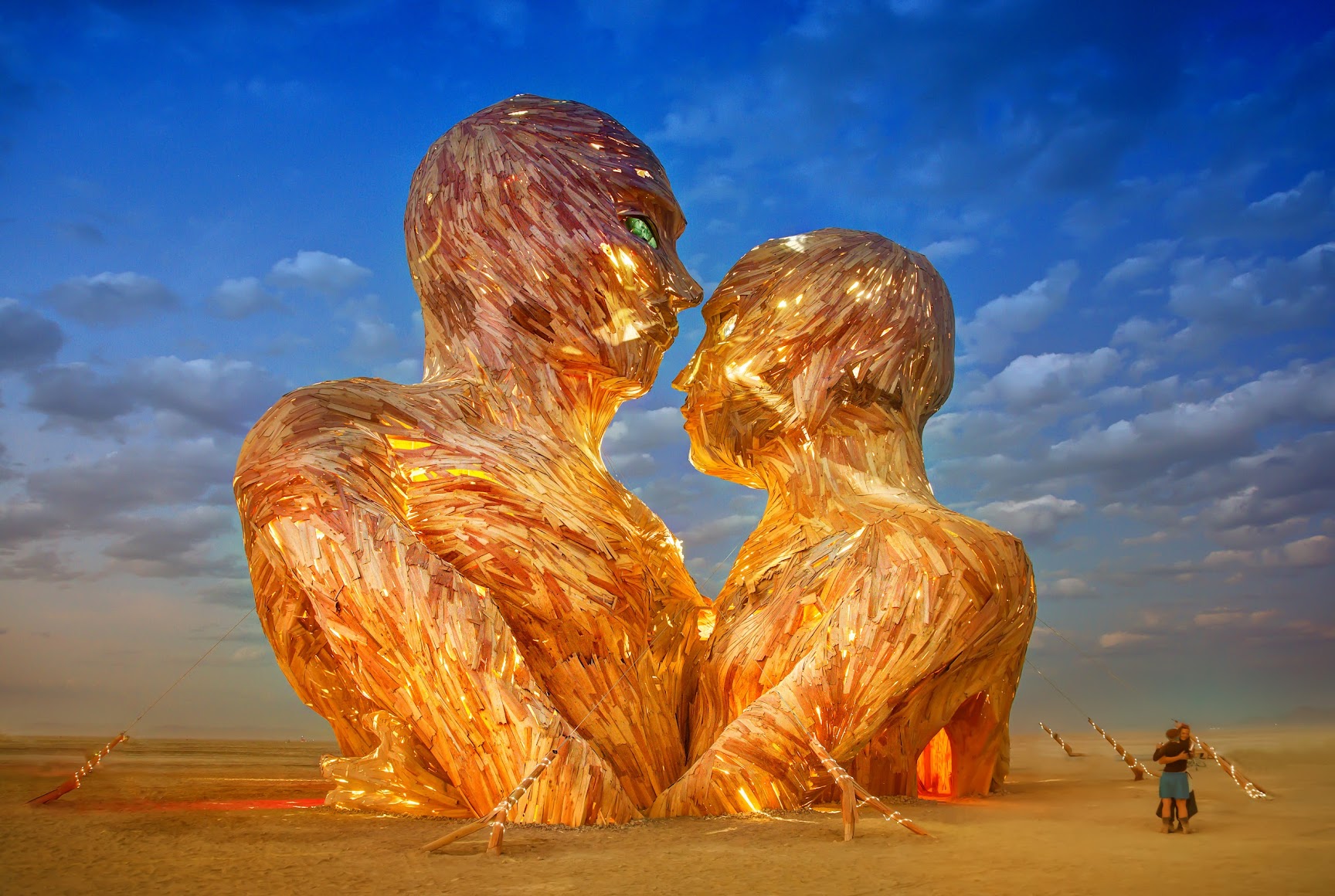