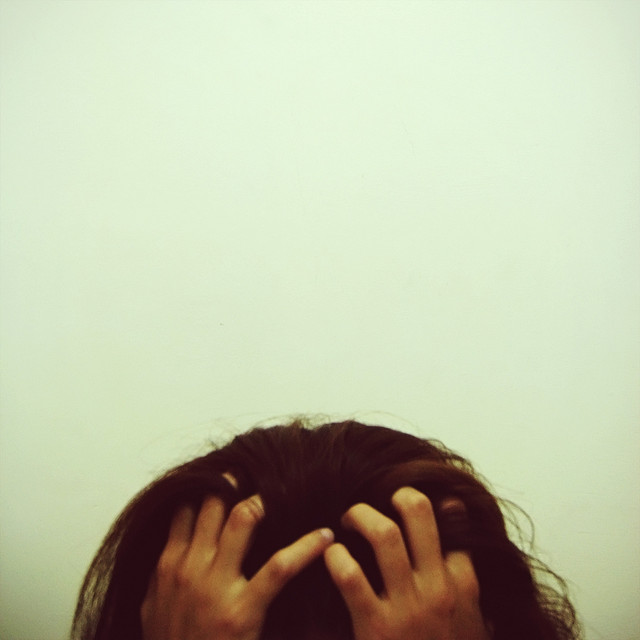 When it comes to life fucking someone over, I had a head start.

I was born to a teenage mother.

My biological father, whom I not-so-lovingly refer to as my sperm donor, lasted a few months before he walked out.

My entire life, I’ve felt abandoned. I grew up, quite literally, as a red-headed stepchild.

By the time I reached middle school, I was a morbidly obese, incredibly uncoordinated, socially awkward, four-eyed, brace-faced, severely pimpled ginger child. Any one of those would have led to being bullied in the 1980s, and I had the pleasure of having them all.

By the time I entered high school, I felt entirely alone.

The bullying, combined with my feelings of abandonment and my inability to relate to the people around me, led to my decision to drop out of high school in my junior year. I didn’t tell anyone, at first. I just stopped going and went instead to the library every day.

Not a single person noticed I was missing.

It wasn’t until three months later when, during one of the frequent arguments I had with my parents, I blurted it out. My desire to have something to throw in their faces was more valuable to me than keeping my secret. I did eventually graduate high school, but it required moving to another state, away from the chaos.

Life Fucked Me Harder When I Became an Adult

Since this is not a topic society spends much time discussing, no one challenged me on this.

When I was in my mid twenties, around the end of my first marriage, the depression, mania, anxiety, delusions, and suicidal thoughts finally caught the attention of someone. This landed me in the psychiatric ward of a local hospital.

I was diagnosed with bipolar disorder (an anxiety diagnosis would follow a year later) and I woke up the next morning knowing my life was over. I had no idea how to overcome a mental illness, and I also had never heard of anyone else doing it. So I sat there, devastated, locked in a hospital ward, defeated.

However, I exited the hospital with a treatment plan, a little education, and the basic knowledge of how to treat my illness. I started out strong, going back to work, going to doctor’s appointments, taking my medicine, and telling people that I was diagnosed with mental illness.

It wouldn’t take long before the backlash started.

Co-workers told me I was faking, friends pulled away, treatments weren’t working, the natural ups and downs of bipolar disorder were interrupted by treatment, and the treatment itself caused side effects. My entire understanding of my body and mind collapsed in on itself.

I was back where I started when I was a child, possibly even further back.

More than anything, I felt abandoned by everyone. I was alive, for the moment, but inside I had already given up. Mental illness isn’t an easy thing to live with, and many people don’t care or don’t understand. There is no outpouring of community support after a mental illness diagnosis, just awkward whispers and seemingly endless darkness. 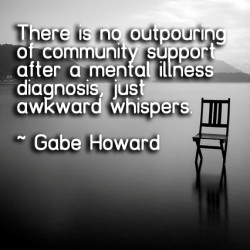 I Fought Back Against Mental Illness.

Then, seemingly out of nowhere, someone said something to me that changed my life:

“So what? Life fucked you. Get over it. Are you going to spend the rest of your life bitching that life isn’t fair, or are you going to do something about it? Because no one gives a shit about you, and you sure as hell can’t pay your bills with your sad story.”

I spent another couple days bemoaning my circumstances, but the switch had been flipped. My resolve had already started setting in and my anger toward my circumstances started to turn inward. I started looking at the massive challenge of succeeding in a world where I would be judged on the same level with everyone else, all while fighting a chronic illness.

I started making plans. I started thinking past being sick and started to think about being well.

I looked at the treatment options, the money and the time. I looked at the odds, and I got up and took a step forward. I took medicine that ravaged my body, so I went back to the doctor and found better medications. I went to therapy. I kept an open mind. I didn’t judge myself, or others, but rather my own actions. I made amends for things I had done wrong instead of blaming my illness.

I took control of what I could and I took responsibility no matter what.

I accepted that life isn’t fair but that this was my life and I could do whatever I wanted with it. More than anything, I worked hard so I could be proud of my life. I realized that life didn’t fuck me. It’s just random. It’s just life. My circumstances, like many people’s, were just something to accept and overcome. I was determined not to allow it to make me miserable.

It took me four years to reach the level of recovery I have now—four years of successes, failures, mistakes, and suffering. It was not an easy journey, but it was mine.

In the end, I realized I didn’t triumph over my disorder because life stopped fucking me…

I triumphed because I stopped seeing it that way.

Gabe Howard is a motivational speaker, award-winning advocate, mental illness blogger and writer, as well a person living with severe bipolar and anxiety disorders. In the pa… Read full bio