Saying Sorry is not the Same as I Love You. 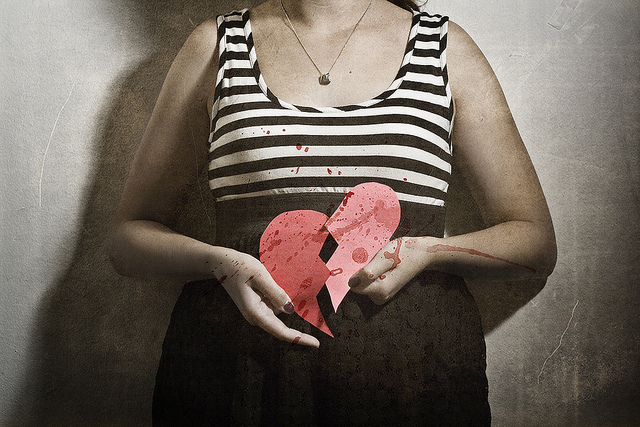 “If I say I’m sorry enough, even for breathing, perhaps he or she will stay.”

Apologizing for actually hurting someone else on purpose isn’t the same as apologizing to someone because we fear they’ll take their attention, love or companionship away.

We take a step that we think is right, based on the other person’s past reactions, and find ourselves on the wrong end of the stick. We apologize profusely, giving up any semblance of self-respect or self-worth and throw ourselves down to the ground, in hopes that we won’t be abandoned.

We’re not being genuine or authentic, we’re afraid of loss.

I hear from people daily who want me to confirm that they haven’t screwed up a relationship (in most cases it’s not even a relationship—it’s fairly one-sided) permanently. They apologize to me, and to the person they figure feels slighted by them.

They are giving away power to the other person and then apologizing for it, and that is the very reason the relationship is slipping through their fingers.

Loving someone does not mean apologizing for our own, harmless actions. It’s a way of saying, “See, I’m not like the rest, trust me, I’m a doormat and would never seriously hurt anyone.”

This is supposed to catapult the object of desire into the waiting embrace of the apologizer. Many times the apologizer is also the fixer. The belief that we can fix anyone, or make their fears go away entirely, is a misnomer and has nothing to do with love. It’s about attachment and abandonment.

The apologizer lacks self-worth and value; the hope is the other person will fill that hole and give meaning to it. By constantly apologizing, we are not winning anyone over. In reality, we are being a burden to the other person.

The other person may love them, or just revel in the showering of attention to a certain degree, but at the same time grapple with the responsibility of the other person’s need for validation.

The need for validation is overwhelming to the person who apologizes. if they feel they’ve disappointed their love, they may feel their life isn’t worth living. Not an over-dramatization; we’ve all felt extreme disappointment and some of us can cope better than others.

In the case of saying I’m sorry, this person has a misconstrued sense of loyalty, love and respect of boundaries. This individual wants their mate to not have boundaries, to be 100 percent accessible to them and to always be in a state of happiness, because this individual takes their mate’s reactions so personally.

Many of us have had people in our lives who we didn’t want to lose. We’d strategize on how to show up, so we couldn’t possibly be rejected and get rejected anyway…and we perceive it, as though we did something wrong. When we’re dealing with a deeply felt pain of always being abandoned emotionally by others, we exude this outward. We believe we have a fatal flaw and in some cases, believe if we keep apologizing for it someone will finally accept us.

The key to breaking a cycle such as this, is in degrees, because some of us have no awareness about our motives and hand complete control of our emotional life over to someone else.

For those who understand that changing this dynamic starts with them, here are a few steps to building self-worth, love and respect:

First, must come the recognition that it has nothing to do with other people, it’s how we show up.

We believe we’ll be rejected and then we’re rejected. Bringing awareness to our feelings–which is unsettling, because we have to get through the anxiety ruling us, because of fear of loss or abandonment, takes time.

Where were we first abandoned emotionally, how did we grow up feeling a lack of value or worth? What things do we do now to get the same rejection?

It’s a manipulation against rejection, in the hope that someone won’t leave. When we stop apologizing it’ll be hard to resist, but in breaking the pattern, it’ll let us see the reality of the situation. It allows us to actually claim responsibility for our actions, but not from a place of failing; instead, a place of confidence. When we get that we’re fallible and it’s okay, as is our object of affection, it’s a more realistic perspective.

Leading us to number three….take the person off the pedestal.

They are not the savior, or perfect. They are flawed and human too.

This post is just a start, there’s many steps involved in the unraveling of abandonment and rejection; there’s no amount of apologizing, which will ever get us to self-worth and self-love.

Love isn’t Passive. If it is, it isn’t Love.