Taming Your Fears: Lessons From a Dog. ~ Aimee Barnes 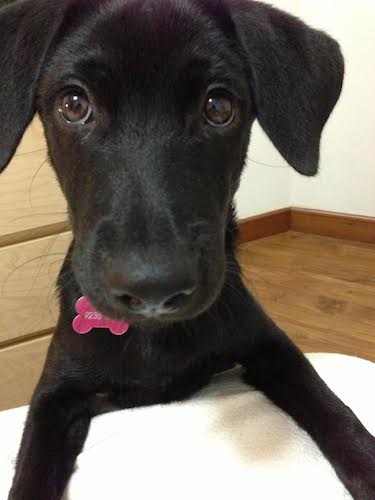 Pixie came into my life two years ago through the animal rescue organization, Action for Singapore Dogs, which re-homes stray mongrels, locally known as “Singapore Specials.”

Found in a drain at a construction site with three siblings, Pixie’s bald tail, comparatively small size and incessant whining would have caused most seasoned dog owners to run the other way, but between my naivety and her squishy puppy face, I didn’t stand a chance.

Cesar Millan has conveyed that we are given the dog we need, not the dog we want. A furball of fears, Pixie’s skinny black body quakes when it’s time to head outside for one of her daily walks, worsening instantly at the sight of an unfamiliar man or the sound of a child’s laugh. She’s also terrified of bright sunlight, bicycles, roller skates, certain roads, car rides, the vet’s office, playgrounds, chimes, bells, Dachshunds, fast movements, the wind. Whenever she’s around a lot of fuzzy friends at the dog park, she cries.

Some of us begin our journey on this planet with significant obstacles on our path that arrive through direct experience and circumstance, biological inheritance stored within our DNA, or a combination of both. Manifesting as fear, these obstacles may remain with us well into adulthood, despite their irrelevance within the now. For instance, Pixie may have experienced abuse firsthand or acquired phobias from her mother and yet, two years later, despite being in a loving home with lots of food and a cat to chase, she’s still collared to her early anxieties.

Every month, she takes small steps forward, like allowing a neighbor to pet her or crossing a street for the first time without bucking like a rodeo animal. She’s already 22 in human years—hardly a teenager—but I remind myself that it took me until just after my thirtieth birthday to even begin facing the seemingly impenetrable fence of fears that had kept me kenneled away from living, leashed instead to booze, pills and the “black dog of depression” that nearly killed me.

If you feel like you’re chained to anxiety and fear, here are four tips to adopt as loyal companions:

1. Remember the acronym for fear, “False Evidence Appearing Real.” Are your fears based in reality and rooted in the present moment, or are they really just predictions about the future based on something that happened in the past and which has little or no correlation? Many of our fears are no more than self-created illusions, and the worst thing that can happen to you rarely ever does. Pixie reminds me of this every time she begins quivering the moment I reach for her poop bag and leash!

2. Alchemize your fears. Make them serve you instead of the other way around. Often fear can be an indicator that we are ready to rise up to a task or calling and begin the next chapter in our lives. Maybe you’re scared of starting a new business, or walking into a gym for the first time, or sending out that manuscript, or having a difficult conversation. Fear is your signal to move forward with action, and it will become your constant companion as you venture into the unknown.

3. Seek out a pack of support. Whether it’s holding the hand of a loved one, having a heart-to-heart with a trusted friend or booking time with a coach or counselor, you don’t have to walk this road alone. When I quit drinking, smoking and relying on antidepressants and benzodiazepines five years ago, I was terrified of what life would look like on the other side, and I knew that I would not be able to turn things around if I only relied on myself. I reached out to many of the support systems available to me and I made it my first priority to begin freeing myself from the chains of terror and worry.

4. Employ the human version of “FRAPS.” FRAPS (frenetic random activity periods), otherwise known as “the zoomies,” is a dog’s way of releasing fear and pent up energy by zipping wildly around the house or zooming through the yard with a telltale scoot and a tucked tail. A people-friendly version of FRAPS, running, was the cornerstone habit that ended up reinventing my life.

Every time I craved a cigarette, a drink or I felt a surge of panic, I ran around the block a few times, which turned into 5ks, 10ks, half marathons, a marathon, and a new career as a health coach and fitness trainer. Strength training is another fantastic FRAP I employed, which eventually led to me train for competitive bodybuilding and become a weightlifting coach as well. By sweating through our fears, we can achieve unimaginable feats of inner and physical strength.