The Christian church used to be central to my life, vocation and identity.

Still, I bring my past theological training to my yoga practice and on occasion I remember a word or idea from my past that I use to interpret how I express and experience yoga.

I think of a scriptural passage where the writer is reminding his community that they are not alone. He tells them that they are, in fact, surrounded by a great cloud of witnesses.

A cloud has come to mean in our day—a digital storage space.

Traditionally, the cloud meant a mass of condensed water vapor, usually white, or tinged in various shades of grey and black.

But I also see a cloud as a continually morphing group of people that see me on my mat—sweating and putting forth effort—and it’s exactly how I see them. When practicing yoga, I am one member of this cloud, a group of people that witness to each other’s’ effort, practice, time and presence.

I practice at Bikram Yoga in Kona. The studio has approximately 175 members, fifty-one of them I call by name. These names remind me that I am not alone—even when my yoga feels like a solitary pursuit. I work to remember each name in our studio because a name concretizes the amorphous nature of a cloud.

Written out, these 51 names would fill only one page.

But if these 51 were added to all the yogis and yoginis that have gone before, those pages would fill stacks in the tallest libraries. It’s good to remind myself that the cloud is very large and growing larger all the time.

We witness to one another in a unique and transformed community.

Our community is not better than others, but maybe a little braver than most. When I write your name, I am writing as a witness to your bravery. That’s why I ask your name at the studio, I have you as my witness and I witness you in my book of heroes.

You are heroic because each day you fight against a part of yourself that tells you not to endure more hard work, more sweat, more bending and pulling on rebellious sinew to the point of pain. But we keep practicing in that hot room week after week because it’s powerful medicine.

I am drawn back to that medicine like a light in the distance draws a bug to its illumination.  In the glow of that bright and powerful light, I don’t expect to touch yoga’s core, for a full unfettered dose of that medicine might burn me just as the light burns a bug. But I want to get close to that core, for it’s a transforming light and heat.

Yoga is not well-understood by the masses. It has no Superbowl nor leagues of competitors; both its methodology and metaphysic confound the rigid, for yoga is paradoxically ethereal and practical.

Yoga is not football. It is not cheered or toasted, the wise-guys and odds-makers don’t care about it. Sure, it might be fashionably popular now, but fashionable popularity in every field is designed for obsolescence.

We join the cloud not because yoga is the beneficiary of marketing wizardry; its popularity has not inspired a mass uprising.

It doesn’t propagandize for a green consciousness, a social ethic or a political persuasion. My practice, anyone’s practice, does not garner popularity yet the number of practitioners continues to increase.

Yoga in the U.S. is caught in the middle, it’s criticized by purists on both sides. Occidental moralists’ distrust the Oriental influence of yoga and they fear that which they cannot control. Some people in the English-only camp can’t stand the greeting or salutation ‘namaste, a combination of two Sanskrit words commonly used in India, which may be used in yoga classes—or worse yet—in schools.

Oriental moralists distrust Western expressions of yoga. To them, the American yoga-stamp is like a bag of rotten oranges and smells like a crowded Casino bus. America’s presentation of an age-old discipline in skimpy raiment and shiny studio represent a true yogi’s worst fear: A first world commercialization of consciousness tagged with hierarchical trappings.

But you and I deserve to witness one another not matter these objections. We deserve the cloud we’ve been in, on—or under.

You and I practice in America, and if the moralists’ don’t like it, that’s their problem. I really don’t care about their problems, but I do have a message: Hey, get off of my cloud, because I’m down for savasana. 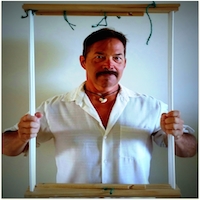