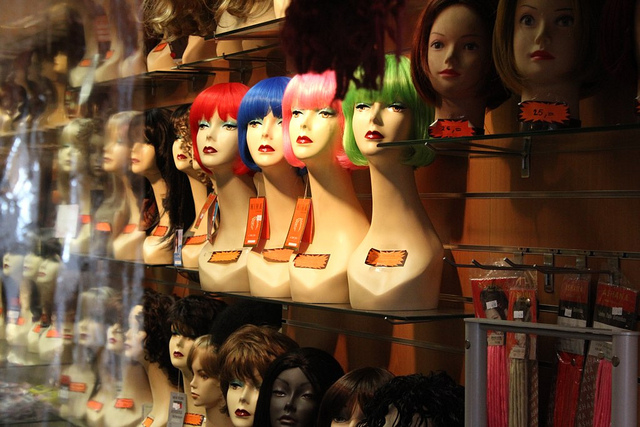 Five years ago, a mere 10 days after giving birth to my daughter, I was back in my pre-pregnancy clothes.

It wasn’t something that I had worked toward or thought about. While many “congratulated” me for losing the baby weight so quickly, there was something else that I was losing, too, something I hadn’t thought about either prior to giving birth—and something that nobody ever wants to lose: it was my hair.

I was losing it by the handfuls.

While the various pregnancy books and pregnancy websites had mentioned that many women experience post-partum hair shedding soon after giving birth, there was nothing typical about mine. I was losing so much that the drain in my shower became clogged.

My long-time hair stylist said that in all her years in the profession and having had several new mom clients, my case was the worst that she ever seen. Even my husband, who never noticed in the past when I had cut my hair, remarked that my hair “looked different.”

In a nutshell, I probably lost well over one third of my hair.

Despite the fact that my hair had always been fine and relatively thin, I nonetheless had a lot of it. Seeing those large clumps of hair in the shower, on my pillows and on the floor wasn’t just distressing, it was downright depressing.

Although I tried to rationalize it by saying that this was probably just temporary and reminding myself that my new baby was far more important than my hair woes, it did matter. While my hair did eventually grow back, it took well over a year before it looked normal again.

As I researched my particular type of hair loss, I learned that I wasn’t alone. Hair loss affects many women including those who have never given birth.

While there are many reasons for hair loss, the vast majority can be attributed to two things: hormones and genetics. (In my case, my hair loss was caused by the former.)

While there are some things that can be done, more often than not, we either have to wait for our hormones to get back to normal or live with the fact that our thinning hair is here to stay. While neither option is fun, there are some tips to make living with this somewhat bearable.

Here are a few things that I wish I had known at the beginning:

1. Talk to a healthcare provider about your hair woes.

The vast majority of cases involving hair loss soon after giving birth are usually caused by hormones, but it may not always be the case. (Those that have never had children should speak to a healthcare provider ASAP.)

If you don’t fall into that category, hair loss could be caused by hormones, stress, certain vitamin deficiencies, heredity, certain diseases or any combination of the above. (A friend of mine recently revealed that her hair thinned dramatically during her first and second year of law school due to stress.)

Once you find out out the cause and you get some understanding about whether your condition is temporary or permanent, move on to step #2 which I personally found to be a god-send.

2. Find a good hair stylist who has had experience with thinning hair on female clients.

A good hair stylist is worth their weight in gold and well worth any extra money you may have to pay. In my case, I was lucky enough to have already been going to one before I experienced my hair loss but others may have to shop around.

My stylist not only did a great job with making the most of my existing hair, but she also did a great job of dealing with that pesky regrowth. (My regrowth stuck straight out for awhile and did not blend in that well with normal hair.) In addition to this, she was incredibly kind and supportive throughout the whole ordeal which brings me to #3.

As I mentioned above, I felt guilty for worrying about my thinning hair especially since I had a new baby but the truth is, how we feel about our appearance does matter and it affects our self-esteem.

When one (male) friend of mine sneered that I should just live with it and than many men had been dealing with it since the dawn of time, I pointed out that while no doubt hair loss can be traumatic for many men, it is still far more socially acceptable for a man to lose his hair than for a woman. (Think of all those bald sexy men that have or had graced the silver screen: Sean Connery, Patrick Stewart, Taye Diggs, etc. Now try to name a woman.)

There is nothing wrong with being upset, angry or frustrated by the situation. An online support group or even a sympathetic friend to vent to can be a massive help.

4. Lay off the Minoxidil, special vitamins or herbs, until speaking to a doctor.

It can be tempting to want to turn to any of these things immediately. However, if the hair loss is the post-partum sort, chances are your hair will start growing back by the time any of this stuff kicks in. (Plus, some drugs, vitamins and herbs are not recommended if breast-feeding.)

Even if you don’t fall into the above category, it’s worth discussing these things with a doctor or some other expert to see if they might work for you—as well as any possible side effects, especially if you happen to take any prescription or non-Rx drugs. (Minoxidil for example is only effective for some types of baldness.) Also, some do not work at all so it is possible that besides having less hair, you’ll also end up with less money.

We might not like to admit it exists, but it does, and it is far more common than most people believe. Luckily there are things that can help. Good luck to anyone to anyone who happens to be in this boat and if it makes you feel any better, I’ve been there and know just how frustrating it can be.

It is important to remember that all of us are more than our physical appearance.