What I Learned from Not Going to Burning Man. ~ Darrin Drda 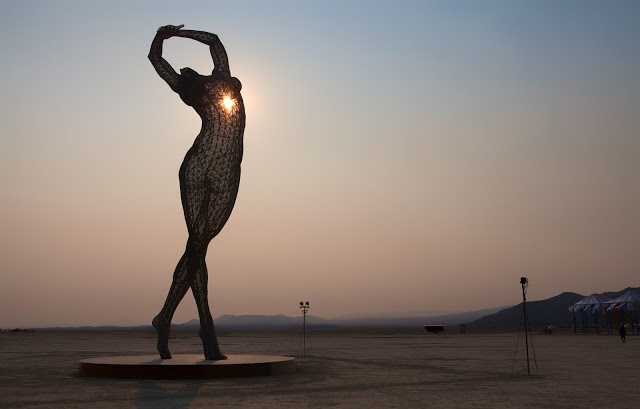 This year would have been my seventh consecutive pilgrimage to Burning Man.

I realize that that’s not an especially impressive streak.

Yet it was long enough for the playa dust to have seeped deep into my dermis, for the ineffable experiences to have permanently altered my worldview and identity, for the art to have shaped my aesthetic and musical sensibilities (and nonsense-abilities), and for Black Rock City to have become a frequent setting for anxiety dreams in which I’ve forgotten my costume boxes or somehow neglected to leave camp until the final evening.

It was certainly long enough for me to feel totally bummed when I realized that my wife and I (we honeymooned in Black Rock City) would just not be able to swing it this year, due to a cacophonic convergence of factors that included an ailing cat, a new job, an impending move to a nearby city, and a pregnancy for which we had ceremoniously prayed for beneath a full moon at last year’s temple.

In astrological terms, seven years is known as a Saturn cycle (technically, one-fourth of the planet’s orbital period), which often marks a major life shift.

Given Saturn’s relation to responsibility and structure, it wasn’t too surprising to find that while dozens of my campmates—not to mention tens of thousands of would-be friends—frolicked in the desert, I was engaged in the relative tedium of working, packing, and combing craigslist in a frantic (and ultimately fruitless) housing search. In short, I was fully immersed in the day-to-day doings of the default world, in which people went about their business in seemingly blissful ignorance of fire-breathing art cars, naked foam bath dance parties, and free French toast.

Indeed the fact that the world continued to function in its usual dysfunctional way during Burn week came as a realization in itself, something I had long suspected but could not confirm.

The rest of my related revelations appear below.

(1) FOMO is not fatal. Fear of Missing Out may cause restlessness, shallow breathing, gnashing of the teeth, gastrointestinal distress, heart palpitations, and melancholia, but it will not kill you. Like a kidney stone, it will eventually pass.

(2) Burning Man is like polyamory. The more you think about the fun you might be missing out on at any given time, the more your imagination will conjure vivid images of your loved ones participating in acutely upsetting activities. To avoid this spiral into self-torture, it may be necessary to distract yourself.

(3) Facebook is safe during Burn week, but not after. Thankfully, the playa is still phone-free for the better part of the week, so your Burner buddies aren’t able to post pics, videos, and status updates about their latest hookup with the Divine.

Immediately following the Burn, however, expect to be assaulted with awesomeness.

(5) One doesn’t need Burning Man to realize the beauty and preciousness of life.

Any spiritual teacher will tell you that awakening is possible for anyone at any time, even—if not especially—in moments of frustration or boredom. External inspiration is not necessary.

(6) But it sure as hell helps. Given the default world’s relentless and effective campaign to encourage competition, instill consumerism, foster complacency, and generally crush the spirit, one often needs a strong jolt of juju—whether a festival, entheogenic journey, meditation retreat, or long camping trip—to get rid of old patterns, unhealthy addictions, and obsolete ideas and to open the heart-mind to fresh perspectives and new channels of self-expression.

(7) The insights gained from not going to Burning Man pale in comparison to those gained from actually going. Let’s face it, this article is just a clumsy attempt to make myself and perhaps a few other people feel better about not attending the most epic experiment in communal creativity and transformation that the world has ever known. Could someone please pass me the TUMS?

(8) Burning Man will happen again next year. Probably. If not, then it looks like I just missed humanity’s last gasp of freedom before the cyborg apocalypse.

Oh well, back to the housing search!