Being a Woman Hurts. It hurts to feel my divine goddessness taken for granted, the world constantly sucking it out of me—on the street, on the internet, on television.

It hurts that I stopped looking strangers in the eye long ago, ignoring friendly old men wishing me a good morning for fear they too might give me goosbumps with their slimy grins.

It hurts that the moment I relax my guard and share a smile, it begins to feel stolen. I’m expected to share more—a wink, an approval, a phone number.

It hurts that when a man does me a favor, when he offers to cook me a vegan dinner, to release the tension from my back, to share an intimate and mutual space of trust, the least I’m expected to do is kiss him for his efforts and let him undress me for his time.

It hurts that I feel guilty when I don’t meet his expectations; I feel bad for letting him down. It hurts that this hurts me because I know better.

It hurts that when I say no, I must repeat it at least five times, often in seven different ways. It hurts that this is not an exaggeration. It hurts that I am not listened to, that my words are mere play in a game I didn’t sign up for, that I must defend and re-defend what I said.

I’m not trying to tease you. I don’t want you to touch me. Stop trying to take off my pants.

It hurts that there are only so many ways to say these things, and it hurts even more that boys pretend not to understand them.

It hurts when I love him, when I trust him, and I just let it happen because it’s easier than looking him square in the eyes as to not disappoint him, easier than ending our friendship. It hurts that we didn’t kiss, I didn’t leave, that I lost my power forcing numbness over my body so I wouldn’t have to make a big scene.

It hurts that when I tell my mom, she tells me it was my decision to stay, like that it was somehow my own fault— because things have happened to her and she didn’t have a choice.

It hurts that things have happened to her and she didn’t have a choice.

I’m tired of the world picking and choosing. Telling me what to keep and what to leave behind. I’m tired of my worth being solely accountable to him, beauty either silencing or enhancing my voice.

Will no one listen when I am no longer young and pretty?

Will anyone listen because I am young and pretty?

Don’t slow traffic so you can follow me down the street as I walk. Don’t tell me to stop raising my hand in class because I’ll marry a wealthy man and won’t need to understand algebra. Don’t leave your number, but not leave a tip when I’m your waitress. I don’t want your number and I don’t want your compliments.

Don’t holler at me from your car—call your sister and tell her how much you love her. Tell your wife how good her hair smells. Thank your mother for doing the best she could with what she had. Embrace and support the women already in your life, instead of shouting empty words to a passing stranger with a body you like.

Boys, she doesn’t exist for you. You exist because of her.

Hold her hand and help her rise—step aside so she can scream and yell and cry. For once, stay silent. Hug her when she’s done.

Girls, you exist for you. Wear high-waisted shorts without a second thought. Hug yourself, treat yourself, take care of yourself. Cry because it’s hard and laugh because you’re stronger. Realize that it may feel like the world is sucking it out of you, but your divine goddessness is endless and infinite. It never stops, and it will never end.

Forgive them, forgive yourself. We’re all stuck in this system that has trapped us into stagnancy. Yet here we are, moving and going and flowing.

When a girlfriend asks you to leave somewhere, anywhere, leave with her.

When you’re sitting on a bus and don’t like the vibes you’re getting from the man next to you, change seats.

There doesn’t have to be a reason. Don’t be afraid of being rude.

If you are reading this, you are miles ahead of many. You are literate, you are (probably) liberal, and you have access to the internet.

I realize my privilege, and can’t even comprehend it when I think about the millions of women the world over going through horrors I dare not even dream about.

If you are reading this, you are lucky because you are never alone. There are so many people you can call who want to help you, who want to hear your story.

If you need someone to talk to, you can e-mail me, I will listen to you.

Boys, girls, and everything in between, we’re existing together. Let’s make us feel safe together. 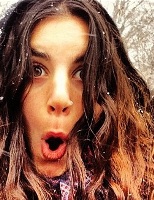