Conquering Fear one Headstand at a Time. 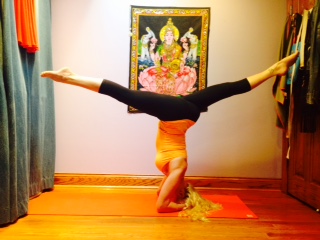 Some of you have heard this ridiculous story before.

Just to be safe I will (briefly) tell it to you again.

Last May, after having recovered from major back surgery—a surgery I feared might leave me unable to walk again, much less do yoga—I was feeling joyful about my amazing progress.

Typical me, I dove back into practicing yoga—too soon my husband (rightly) said—loaded my teaching schedule and even took the opportunity to book a yoga photo shoot in New York with the venerable Robert Sturman.

Once in New York, I decided to spend the day before the shoot riding a rented bike around Central Park—I promptly fell off and broke my arm.

I lay on the street on that beautiful spring afternoon, my body in pieces once again and cried up to the heavens, or actually down to the bloody mess that used to be my arm, “Why me?”

I went home in a cast, never having met Robert, got two huge metal plates screwed into my bones and moped around plotting how to recoup my losses.

The doctor told me it would be months before I healed and I dutifully went to occupational therapy and tried to not to scream as my therapist moved my arm in all kinds of ways that felt like they’d been devised at Guantanamo.

Three months later, I tenderly began to experiment with my new super reinforced bionic ulna and humerus and found, on most days, I could do a modest down dog, eagle arms and even reverse prayer—kind of.

Right around that time, I got a message from Robert saying he was coming to Chicago, my home town and would I like to reschedule the shoot. I said a hale and hearty yes, and then wondered what I had just agreed to. The shoot was now a mere three months away and I could barely chaturanga.

So right then and there I set myself a challenge. I have always been a sub-par inverter in yoga, mostly due to fear, and I thought, maybe if I challenge myself to get more proficient at inversions, or to be brave enough to admit that I’m not well enough to do them, I would make some inroads towards my fear of doing this photo shoot, too.

I decided to do one inversion a day, any kind was fine, with the focus being on what was physically appropriate (legs-up-the-wall pose if I was unable to do any other), not catering to my ego, trying to have fun, and learning to be brave.

I got a pen and paper and put it in my little home studio, knowing that holding myself accountable was of the utmost importance, rolled out my mat and kneeled down on it.

The first day, all I could do was think about doing a headstand. I stared at Lakshmi, hanging in all her embroidered glory on the wall before me and broke into a cold sweat. Well, that’s enough for one day, I told myself. I wrote down what I’d done.

The next day I managed to get the crown of my head on the ground and pressed against my interlaced fingers. I thought about how I always tell my students that this position is the pose. If you get that far, you are in bound headstand, no matter what anybody says or how lame it looks. Again, I wrote down what had happened.

For weeks, that was all I could do. My forearm ached terribly from the break and my incision was right where my skin had to press into the ground. It was a big deal when I finally managed to tuck my toes under and lift my hips up into the air. My heart raced with nervousness. Would I ever coax my feet up off the ground again?

But soon, I did just that. First for just a second, one foot, then the other, tucked up toward my rear into the egg shape which is the baby way I was taught to enter the pose. Every day, my egg got stronger and it dawned on me that though my arm still bothered me—both the bone and the incision, it was bearable and my mind felt much better, much more calm.

Eventually, I was sound enough in my egg to sneak one whole leg up and then the other, weaving wildly upside down as I tried to maintain my balance. I felt a rush of delight—I was doing it! Things were changing, I was healing and getting better.

I didn’t really expect much more than that, and it was enough. I was back to the same level I’d been at pre-accident—a serviceable sirsasana. No, I wasn’t super confident when I was upside down but I probably never would be. Whatever. I decided to keep doing an inversion a day until the shoot anyway, just for the hell of it, and so continued on.

And then somehow, maybe because I finally accepted where I was, something big shifted. One morning as I kneeled down like I had every day for the past 30 days on my mat, placing my head on the ground and my butt in the air, my body seemed to follow some new, unwritten directive. My feet literally floated up off the ground one at a time and stopped, perfectly balanced at the top of an arc, my whole skeleton from my toes to my skull lining up effortlessly in what had previously been the bane of my practice—an easy headstand.

I had no idea a headstand could even feel like this! Joyful. Effortless. I wanted to hang there upside down for the rest of the day.

I started to play around with leg variations in the coming weeks, and then moved onto tripod headstand and toyed with the idea of scorpion and other related postures. Each day I felt that stab of fear before inverting, but I became more and more comfortable simply feeling it and then doing whatever it is I wanted to do anyway.

It was like I had cast off a set of iron shackles that I had worn unconsciously since I was a little girl.

Ultimately, I did an inversion a day for 90 days, gently challenging myself each time. I learned to trust my body and my instincts in a way I never had before. By the time the photo shoot rolled around again, I felt like a different yogi than the one who had gone to New York. That broken arm had not only not ruined me, it had enabled me to grow by leaps and bounds in all directions.

I realized something I had wanted to believe all my life, but never quite had—it isn’t what happens to us that defines who we are, but how we respond to it.

When I finally found myself with my feet in the clouds, my head planted on the ground and my heart soaring in front of Robert’s lens, I understood—fear is moldable, malleable, and most importantly, manageable—and I never need to bow down before it again.