The Origins of Ebola Are Not What You Think. ~ Chelsey Engel 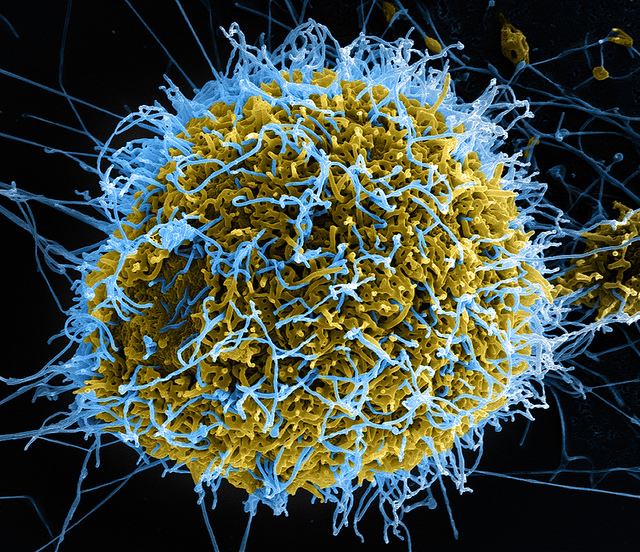 “A virus does not respect the finer distinction many of us like to draw between ourselves and others.” ~ Robert Bazell, former NBC science correspondent, 1985.

If you’re not already aware, let me enlighten you with a small bit of information: we live in a reactive society, not a proactive one.

It bites us in the ass again and again and takes the form of a thousand different tragedies from global warming to genocide, from unnecessary wars to infectious disease.

We wait until our problems have exhausted themselves and are usually far beyond repair. If it isn’t affecting us personally, right now at this second, then it can wait. Out of sight, out of mind.

What is currently happening with the Ebola outbreak in West Africa appears to be reflective of that unfortunate, ugly flaw of our world, as it is almost an exact replica of the early stages of the AIDS epidemic in America during the 1980s.

When the public was first made aware of AIDS in 1981, most of the country, particularly the government, who should have been responsible and who could have alleviated the problem from the onset, turned a blind eye. Acknowledging the devastating illness would have meant acknowledging a portion of the population they did not respect and preferred to isolate — the gay community.

Many believe, as do I, that AIDS would have left a completely different and less noticeable mark on our world’s history if the disease had been prevalent in another population, say, white businessmen on Wall Street.

Take, for example, Legionnaires’ disease, which struck America in July of 1976. The illness broke out during the annual American Legion National Convention in Philadelphia attended by U.S. war veterans. By August, a mere month after the outbreak began, the nation was alerted of a possible epidemic. Within six months, scientists (funded by the government) were able to identify the bacterial cause. At its conclusion, the disease took 34 lives.

It took Congress two years to provide any specific funding (a paltry $12 million) for AIDS research, which was not even close to covering the costs of managing the disease that had already claimed at least 2,118 lives and had spread to over 33 countries by 1983.

Of course, AIDS was a much more difficult case to crack considering the virus turned out to lie virtually dormant inside one’s body without causing many symptoms until it became unstoppable, and then it was often too late. However, funding that should have been made available as soon as the crisis was identified was not there because society (again, mostly our government) saw its main sufferers as disposable.

Flash forward to today, 2014, when a horrifying illness is spreading across a region we don’t feel connected to here in Western society. The first cases of this current outbreak of Ebola were known in March of this year, yet it has taken until now, seven months later, for the funding to start trickling in. And that’s the problem — it’s merely trickling.

The U.K. has pledged to donate 700 beds within the next few months. The United States will also be sending 3,000 troops to assist with transporting medical equipment. That’s great, yes, but what Africa needs is 700 beds now. It needs 3,000 troops now. It needs medical teams on the ground and it needs the same high-quality facilities and care we have access to here in the West. And not just for this current outbreak, but for the future health of the continent as a whole.

This unfortunate plague has already claimed over 2,900 lives and the number of new cases is growing uncontrollably every day. But the thing is — it shouldn’t be uncontrollable.

We live in a world where we have shown that when a disease strikes (Legionnaires’), we have the power and the will and the ability to act quickly to save lives—that is, when we want to. What needs to change is how we see the lives of our sisters and brothers and what we find them all to be worth.

Paul Farmer speaks on this devotedly. Farmer is a world-renowned doctor who has dedicated his life to humanitarian work in often ignored places such as Haiti and now West Africa. He knows that all lives are worth the same and every person on the planet deserves the same access to and quality of health care regardless of where they happened to be born.

He once stated in a commencement speech at Boston College in 2005,

“Human life and human values cannot have price tags attached to them.”

Farmer also spoke about metanoia, or “change of heart,” something he experienced when first visiting Haiti and witnessing the dire need for better quality health care for all countries, especially those that are all too often forgotten.

What this world needs now, as we face a tragic epidemic like Ebola, is to undergo this change of heart. We need to realize that our lives and our health should never, under any circumstances, be seen as commodities, whether we live in a penthouse in New York City or in a mudhouse in Zambia.

Illness sees no color, no gender, no creed or financial status, and neither should we. Africa has been suffering for decades from inadequate health infrastructure even though advocates have been desperately pleading to fix that. Is it going to take this devastating epidemic, possibly reaching 1.4 million cases by January 2015, to finally wake up the world, and America in particular, to step up and play the role it knows it can and should play and fund a permanent system to keep outbreaks like this from happening again?

President Ellen Johnson Sirleaf of Liberia, one of the West African nations hit hardest by Ebola, says it best when she states, “Liberia cannot defeat Ebola alone. This disease is not simply a Liberian or West African problem. The entire community of nations has a stake in ending this crisis.”

I am not a doctor. I am not an epidemiologist. But it doesn’t take a medical professional to realize what needs to be done.

We have to stop pretending portions of the earth’s population don’t exist. We have to stop drawing lines where we should be building bridges. The health of the world’s citizens, no matter where they live, affects us all. We all live on the same planet and we all breathe the same air and we all bleed when we’re broken.

We created this epidemic through our own behaviors found to be so entrenched in our society that loves to segregate and separate for what we fool ourselves to believe to be our own protection.

We may be too late to say we acted without delay, but it’s not too late to treat this epidemic as if we actually give a damn.