The Pros & Cons of Holi Festival. 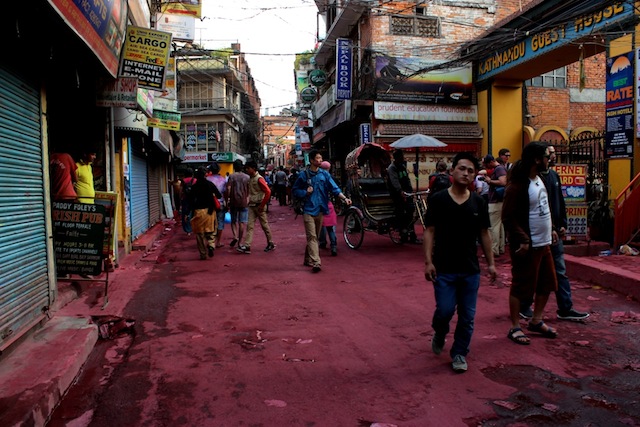 The Holi festival, also known as the festival of colors, is a Hindu religious festival where people celebrate colors, love and spring.

According to the legend, “Holi” is derived from the word “Holika.” Holika is the sister of Prahlad, who is the son of the demon king Hiranyakashyap. Hiranyakashyap attempted to kill his own son for not worshiping him. The legend ends by Holika saving her brother from their father’s cruelty with the blessing of Lord Naarayana. Therefore, Holi is originally celebrated as a festival of victory of good over evil. Holi is celebrated all over the world, but mainly in Nepal and India where it originated. The celebration is pouring water and colors all over each other. It is mainly done by exchanging greetings as, “Happy Holi” and applying colors on the face or the body while doing so. This year, Holi took place on March 16th across Nepal and India and as I spent one month in Nepal, I planned my trip accordingly. I have got to say that being part of the Holi festival in Nepal was one of the most astonishing experiences I have ever had. The whole country prepares itself one day before the festival. When you wake up the next morning, you can see that all the stores and offices are closed in order to celebrate this festival––and of course to save their commodities and wares from the colored powder. As much as I enjoyed it, at particular moments the festival got me pretty frustrated. If you’re attending Holi festival next year or anytime in the near future, you must acknowledge the reality of being there during this time.

Playing with colors is fun. Painters will undoubtedly know what I mean. As a painter myself, I utterly enjoy the feel of paint on my hands. Imagine you have an endless background of play that is full of colors. The sight of it is solely breathtaking. You will feel like a child again, running all over the streets pouring powder on other people and running away from the heavy bags of water. It’s like a colorful battlefield and you are six again! You feel one with everyone else. In our daily life we tend to operate on a duality basis. When someone passes across the street, we exchange those arrogant looks and create a whole judgmental scenario in our heads. During the Holi festival you won’t witness this kind of behavior whatsoever. Everyone is friends with everyone else and nobody is selective in their play; at the end of the day, you will meet more people than you can imagine. You will experience true letting go. When we first went down on the street, we were indirectly protective. I remember I shouted at a local guy who poured the very first color on my shirt. And as we walked the next 15 minutes, I noticed that I left all my rings, bracelets and necklaces on—including my Mala. But once I observed how the locals were enjoying the moment, not really minding where the colors were sprouted, I truly let go and enjoyed the moment myself. Letting go and getting immersed in the experience is what truly made it beautiful. You will feel unity. The greatest thing about the Holi festival is seeing unity all around. Unlike how the world is currently operating, you can actually see people with the same happiness sharing the same experience. It was immense to see how colors and joy can reunite a whole country. The streets look magical when Holi ends. If there is one thing I truly enjoyed when the Holi ended it’s the street. You will literally see the country painted and as you walk you will feel yourself walking in a Renaissance painting. As a result of washing the road with all the colors sprouted on it, it will magically take the color of purplish red.

The play can get really vulgar. I honestly didn’t see that coming as we were moving forward to Durbar Square. Despite the fact that running away from water bags is fun, it is as dangerous as hell. As you walk down the street, you will catch heavy bags of water being thrown by the local women from the rooftops. I literally felt I was fighting in a battlefield; I remember holding my head between my hands and hiding in building entrances every five steps. The color black is not as friendly as you think it is. The colors which the locals will sell you are mainly yellow, purple, blue, orange, red and green. But somehow, you will see local gangs all dressed the same, with the color black and they will try their best to attack you with it. I, myself, was attacked with it many times and pouring more colors on top of it won’t help decrease it in any way. If not from the teeth, I wouldn’t be seen. The shower that follows the Holi festival. It was the longest and hardest shower I ever took in my entire life. I spent almost two-and-a-half hours trying to remove colors off my body. And the sad news is that they won’t be removed completely. The powder on my nails stuck there for a month and even after a couple of months I was finding red and green on my hair. The second bit of sad news is how the bathroom will look like after the shower––you will be present in another Renaissance painting––and cleaning it is a great hustle. The streets can get really slippery. I recall that I almost fell many times and I didn’t realize how dangerous that was until I read the newspaper the second day. One local girl died as a result of slipping and one boy fell off the roof of his house as he was throwing bags of water from up above. Lethargy is what you will feel after the festival. After many hours of play and two-and-a-half hours in the shower, you will be drained of energy. I spent the next day resting in my room…actually the next two days. Tips if you’re attending a Holi festival:

The Holi festival in 2015 is taking place on March 6th across Nepal and India. Enjoy the experience! 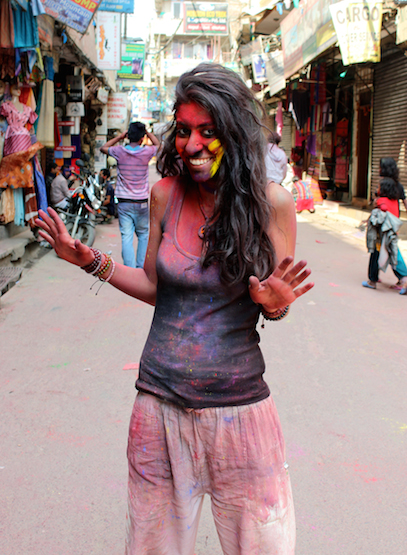