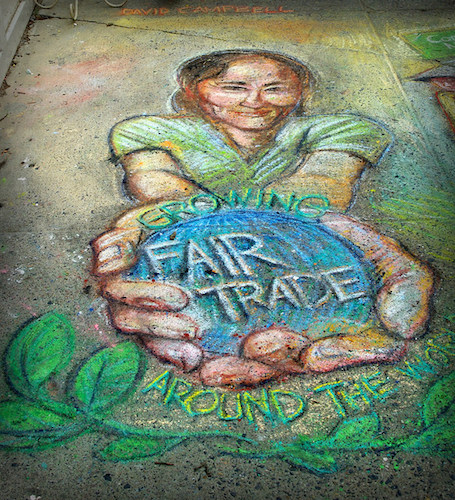 Let me preface this by assuring you that “always” is a stretch.

Because like you, I am human, and sometimes I buy these things at the regular old supermarket. But in an ideal world, I would always buy Fair Trade, especially when it comes to these three foods. Because outside of fair trade, the industries that produce these delicious items are appalling, as are their repercussions.

Organic, at least in the U.S., is a funny label. It costs a lot of money to become certified, so a lot of big brands buy their way in, while many small farms can’t afford to go through the process, or don’t bother. Still, when I buy eggs from my neighbors, I feel fairly confident that they are indeed organic.

Fair trade, on the other hand, is not about ingredients, though packaging often boasts “Organic and Fair-Trade” in the same breath. As I see it, neither organic nor fair trade is complete without the other; both are parts of a much larger and more complex whole.

If we were to simplify things, I would describe “organic” as consumer-focused—we, the people buying and eating food, want to know for our own sake that that said food is free of chemicals, GMOs and other toxic “stuff”—and maybe earth-focused, if our concern extends to the impact of that “stuff” on the earth.

Meanwhile, fair-trade is producer-focused—we, the consumers, realize that the food on our shelves represents just the last step of a global system of production and trade, and we wish to know that the people at the far end of that chain are nourished by it as well.

At least, that is the idea. Labels are nothing if not wily. The more research we do, the more we might discover about the gradations of fair trade and the reality on the ground. But it is unquestionably an improvement over unfair trade.

I digress. The three foods I always try to buy Fair Trade are:

Have you ever heard the term “banana republic”? It’s not just a clothing store. American writer, O. Henry, coined the term in the early 20th century, and it has come to refer to the corrupt governments (dictatorships) that support(ed) exploitative plantation agriculture, especially when it comes to bananas.

In the 1870s, United States companies began to take control of Central American banana plantations, wreaking havoc on local politics and production by acting solely in the interest of their own businesses. One of these, the United Fruit Company, became what we know today as Chiquita Brands International, the largest banana distributor in the U.S.

The legacy of exploitation lives on. Chiquita has repeatedly generated controversy for its treatment of plantation workers, its poor environmental policies, and its pay-offs to Columbian armed forces (all on the U.S. State Department’s list of Foreign Terrorist Organizations) for protection. Its fair trade counterpart has not.

Coffee is a “tradable commodity,” and perhaps it is for this reason that it has proven highly susceptible to the vagaries of the market. Many farmers in developing countries switch to coffee farming due to its potential for large profits, or out of desperation. When too many farmers make that switch, effectively over-saturating the market, or when a new country enters the market, selling for even lower prices, that switch can mean total economic devastation.

Fair trade essentially offers coffee farmers a fair, and perhaps more importantly, a guaranteed price for their goods. When it works, it generates stability and freedom from the vicious cycle of cash crop dependence.

In Michoacán, the “avocado capital of Mexico,” small avocado farmers face two massive obstacles: drug cartels and corporate giants. Like bananas, the avocado industry is largely profit-driven and exploitative. Yet despite all efforts to extinguish small business in the region, farmers have collaborated to take control of production and change things at the ground level—literally.

I want to support their efforts to improve trade relationships and shift from a corporate to a community model.

I am trying to find a way of eating and relating to food that acknowledges my place in a wider system of production, trade and interconnectedness. As consumers, we have the option of collectively influencing markets with our choices and demands, or, at the very least, we may individually withhold our support from the industries we find unethical.

I could add so many foods to this list. Chocolate, sugar and rice quickly come to mind. Typically, I try to choose fair trade or Equal Exchange when a choice is present. It is my way of acknowledging my debt to the producers of these foods.

Like I said, I’m still human. I have a budget. Sometimes I buy avocados at Shaw’s, because I want avocados and they are half the price of the ones at the Coop across the street. Sometimes I buy regular old commercial coffee because it’s on sale, and I certainly don’t boycott whatever coffee my local diner is pouring. Though perhaps if we all did so, our favorite restaurants would pay attention. Ditto for bananas, but once I established the habit of buying fair trade it did become easier to maintain.

Studies show that I am in the majority. Though almost all consumers surveyed supported ethical and fair trade products in theory, when actually presented with the choice between paying more and paying less, statistics show we can’t quite follow through. That is why most of these fair trade items represent less than one percent of the market.

There are arguments, too, in opposition to fair trade organizations, questioning their effectiveness and their legitimacy (fair trade can be a powerful marketing tool). These are valid questions to ask. Still, I maintain that trying to foster fair, ethical and equal exchange is preferable to ignoring the realities before us.

Remember that your consumer dollars actually have power in the market. Consider how you might exercise it when it comes to food.