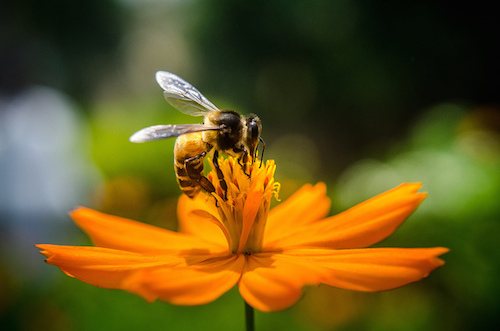 But after directing the documentary film Vanishing of the Bees, narrated by Oscar-nominated actress Ellen Page, I became a bee advocate for countless reasons.

This fuzzy insect is one of endless surprise and delight.

For starters, honey bees are a female society. 95 percent of the hive is made up of female workers, sisters to each other, and daughters of the Queen. They are considered to be ancient messengers (as well as teachers), when it comes to things such as cooperation, industriousness and adaptability.

They are selfless and work together with swarm intelligence for the greater good of the hive.

They do amazing things like beat their wings at 250 times a second, twisting them for maximum lift.

And yet, honeybees, who pollinate one out of three bites of the food we eat (everything from avocados to zucchinis) are disappearing all over the world, thanks in large part to nicotine-based pesticides called neonicotinoids.

This past year marked the highest losses of honey bee populations in the country.

At very low doses, these systemic pesticides negatively impact the immune system of the bee and interfere with the nervous systems and their navigational capabilities, causing tremors, paralysis and eventually death.

These pesticides, which were first registered for use in the mid-1990s, are also poisoning our food supply, negatively impacting other pollinators and have now made their way into American rivers. They also impair developing human brains.

Unfortunately, the pesticides are still being used in this country even though the European Commission recently proposed a two-year ban on three of these systemic insecticides to give researchers time to determine the actual effects.

It’s called the Precautionary Principle. You don’t take the risk before knowing for sure.

But here, they just put it out into the environment and blindly trust the studies that have been conducted by the actual makers of these poisons. That’s right, the Environmental Protection Agency does not do any independent research.

With that said, I do believe that progress is being made and that the honey bee is on the forefront of our consciousness more than ever before.

It is up to us to continue to spread the buzz about bees.

“Vote with your fork.” ~ Michael Pollan

We cannot afford to lose these sacred creatures.

They are the reason we have nutritious food to eat, and to top it all off, every substances they create is medicinal and magical.

Here are five reasons why bee goods revitalize our health.

1. Raw Honey: Nectar of the Gods

In her six-week life span, a honey bee will only produce a quarter of a teaspoon of honey. Think of the cooperation that is required to accomplish this the next time you come across a jar of honey.

The ancient Greeks referred to honey as the “nectar of the gods” and the benefits of raw honey are numerous. Honeybees from a typical hive visit approximately 225,000 flowers per day.

Honey, which is literally bee vomit, is both antibacterial and antifungal—so much so that it’s the only food that never spoils.

This liquid gold is so potent that it’s been shown to even kill the deadly bacteria MSRA! Honey is also loaded with minerals, enzymes, and antioxidants. Honey can be used against coughs, to treat burns, to build up our immune systems, dress wounds and even as a facemask.

Preferably, you should choose a honey from a trusted source because often times grocery honey has been heated, which means it’s virtually dead of any nutrients. And to cut costs, it can contain other things such as lactose, rice syrup, and even antibiotics.

Honey is like wine in a sense because so many variables affect the taste and the quality. Weather makes a difference in addition to what the bees are pollinating in the region. There are about 300 distinct varieties of honey.

Propolis is a sticky, chewy substance composed of sap, other resin and botanical sources.

The bees use it to seal their hives against the elements and to prevent diseases and pests from entering the hive.

If, for instance, a mouse or a lizard happens to crawl into the hive and die, the bees will mummify the carcass with propolis, ensuring that it doesn’t infect the bees in any way.

Propolis is used to soothe sore throats, coughs and has been also known to treat cold sores and even herpes.

In some countries it is used preventably against urinary tract infections and to reduce inflammation. It is also antifungal and antibacterial.

3. Royal Jelly: Fit For A Queen

Royal jelly is a white, gooey substance that the bees secrete from glands located on their heads.

A larvae being reared for Queenhood is fed copious amounts or royal jelly, which is so rich in nutrients that it is considered a superfood.

Royal jelly contains fatty acids, vitamin B’s (best natural source of vitamin B5), amino acids, minerals and a protein called royalactin which is responsible for catalyzing the metamorphosis from worker bee to Queen.

A queen bee is larger than the average worker, elongated and regal-like. And while worker bees have underdeveloped ovaries and can only live six weeks, a queen bee has ovaries and can live up to five years. All thanks to the royal jelly that she eats. (Unfortunately, due to conventional farming and chemicals, queens no longer live this long.)

Royal jelly has been used in anti-aging products and according to a recent study has been found to improve spatial memory and concentration.

When choosing a royal jelly product, it’s important to ensure that the bees have not been harmed. Immortality Alchemy, a company based in California, ensures that the bees are treated ethically.

Another advantage to this formulation is that the royal jelly is dried so you can easily add it to smoothies or yogurt. I mention this because one downside of royal jelly is that it tastes horrible. I had one friend liken it to the taste of sperm.

As a honey bee flies around, she uses her legs (which have bristles on them called “pollen combs”) along with her mouth to scrape up the powdery loose pollen from a flower’s stamen.

If you look at a honey bee in-flight, she often has too little balls of pollen on each side which she’s holding in “pollen baskets.” It takes a bee eight hours a day for one month to gather a teaspoon dose of pollen.

How amazing is that?

And each pellet contains more than two million flower pollen grains. One teaspoonful contains over 2.5 billion grains of flower pollen.

Bee pollen, which is used to feed the young, is one of the most nourishing foods on the planet!

It contains all the essentials to keep us healthy, such as amino acids, vitamins (including B complex and folate acid) and protein. Bee pollen is actually 40 percent protein—more rich in proteins than any animal source. It contains more readily absorbable amino acids than beef, eggs or cheese of equal weight.

It is extremely important to know where you’re getting your bee pollen from.

Because according to Greenpeace and the scientists I’ve interviewed, one teeny grain of bee pollen has been found to contain up to 17 poisonous pesticides.

I recommend Hive Mind bee pollen because it comes from a fourth generational beekeeper in Northern California who doesn’t keep bees near conventional farms. They also vacuum seal the pollen so it literally tastes like it was collected fresh and fluffy from the hive as opposed to hard and granulated.

5. Mind Your Own Beeswax

Honey bees consume about 17-20 pounds of honey to make one pound of beeswax, which they produce to create hexagons that make up the comb for their babies.

They actually make beeswax from eight paired glands on the underside of their abdomen. I often tell people that honey bees are the best recyclers around. Talk about self-sustainable.

If you’re lighting conventional candles to add mood or scent to a room, you are, in fact, polluting your lungs and the air.

Conventional candles are made out of paraffin which is a petroleum by-product that has been linked to liver damage, leukemia and neurological problems. And the scents you are inhaling are actually synthetic fragrances that can lend to respiratory distress, headaches and allergies.

Beeswax, on the other hand, happens to be a renewable resource, which actually purifies the air with its negative ions. These ions can also improve our mood, energy and health.

Beeswax candles also burn longer and have a more enjoyable light. The Roman Catholic Church deemed beeswax candles the only ones fit to burn because they come from virgin sisters of toil.

I personally fancy the Seattle-based company, Big Dipper Wax Works because their practices are sustainable and their sweet-smelling candles are yummy and beautiful.

Aside from the honey scent of the beeswax, they also use the purest essential oils in some of their varieties.