Adventures in Doll-Making: Why our Imperfect First Try was a Winner. 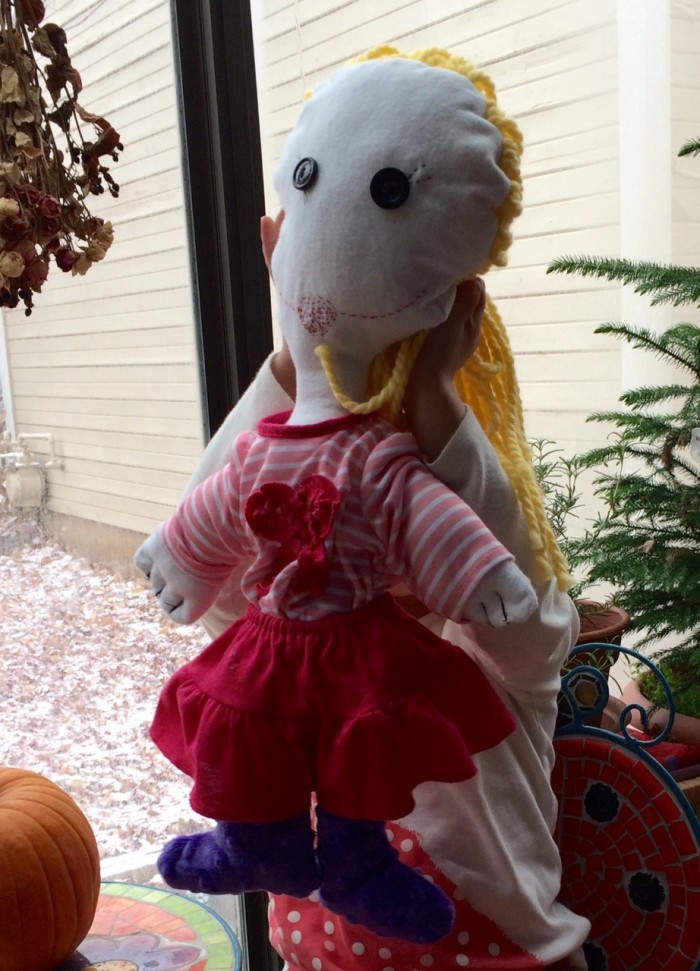 We have no idea when inspiration will strike.

It can come like a jolt, or as a slow-percolating notion. The thing is, as an adult, the logical mind is quick to follow with momentum-ending statements like:

“What am I talking about? Buying that 1943 Pontiac is a horrible idea. I have no idea how to work on old cars.”

“Yes, making a quilt would kick ass, but it makes more sense to use my extra time doing the following: getting some exercise, catching up on my blog, calling my grandpa, and cleaning the corners where all the goo builds up.”

“Roller derby would be amazing and I do have the thighs for it, but do I really want to deal with all the practices and the likelihood of having major injuries while I have a little one to care for at home?”

And then there are the things I have earnestly intended to do—like taking a cooking class, getting really really good at roller skating, becoming a master gardener—that simply get put off for no particular reason aside from the fact that other, more pressing, things in life ditch in line.

However, none of these rationalizations-of-not-doing stand a chance when held up to the light of a five-year-old’s idea proposal.

It was Saturday night. My daughter, Opal, and I were reading a library book we hadn’t read before: Fanny, by Hollie Hobbie. (Fabulous illustrations.) The book is about a young girl who’s mother refuses to buy her a “Connie” doll, which is the equivalent of a Barbie.

Connie dolls look like, well, dumb hookers, and Fanny’s mom says they are just “too much.” (And she isn’t talking about the price.) Fanny is utterly frustrated because her best friends have Connie’s, so she locks herself in her room for an entire day and makes her own doll. This doll, Annabelle, is an imperfect, floppy thing with bright eyes and a strange, heart-shaped mouth.

Fanny is embarrassed of her doll at first, especially when taken to play with her friends and their Connie’s, which look even more sexualized and bizarre in comparison to the sweet, innocent hand-made doll.

The pivotal moment in the story is when Fanny shoves her doll in a dresser drawer, annoyed that she doesn’t look like the other, store-bought Connie’s. But the doll looks up at her and seems to say, “You made me, don’t you love me?”

And from then on, Annabelle and Fanny were the best of friends.

“Again!!” Opal yelled before I finished the final words on the last page. “Read it again!” She was riveted.

We read it three times.

I paused to consider all the reasons why we would not be able to make a doll: I have no idea how was on top of the list.

But my logical mind was flimsy and porous in the face of this sparkly little girl who had been genuinely touched by this book we just read. Three times.

She went berserk and tackled me, squealing—like one of those commercials where the parents record the kids as they tell them they are going to Disney World. Then, she did not sleep for a very long time.

“Oh, mommy, I just can’t stop thinking about her.”

I caught the glee like a good contagion. The next day, I found myself rummaging through our fabric bin with as much gusto as she did. I watched youtube videos, none of which helped one iota, aside from showing me that a hippie girl with a bandana and a slight lisp could make a dolly in her living room. We took a field trip to Micheal’s to get the proper colored yarn for her hair (soft, thick, yellow) and to buy a box that was to be used for her bed. Jesse even came along for that.

I cut and sewed and cut and sewed some more while also trying to find ways for Opal to be involved, since her little fingers were not quite dexterous enough to handle a needle. (I need help picking out the buttons for the eyes. Grab the fabric you want to make into a dress! How about the bed? You better decorate the bed with a deluge of stickers.)

The project that took most of the afternoon on Sunday—Broncos game in the back, all of us residing in the same creative location—and much of the evening after Opal went to sleep.

The part that stumped me was the legs. I made the top and the bottom two separate halves, and I could not get them to line up properly for the life of me. And it took me multiple false-starts to give her ‘purple booties’, as was specifically requested by my young artistic director before she fell asleep.

I sewed and unsewed probably a half dozen times. The legs never quite looked right, but finally, they looked right enough.

I saved the hallowed-out body for Opal and I to stuff together in the morning. And that we did (with Micheal Jackson’s Essential hits bumping in the background). Opal hugged the stuffing in order to charge it with love and she had a tiny golden heart that she held in her hands for an indefinite period of time before I inserted it into the fluff, as well. The obvious affects of our timely, collaborative work and intention came through in this situation even more so than while at build-a-bear for her birthday a few weeks prior.

We stuffed her and I sewed her up and we put dolly clothes on her which (phew) hid most of the flubs and bumbles that were apparent at the mid-seam, her head flopping this way and that.

She was our perfectly imperfect first attempt and we loved her.

There it was—for the weekend, I was a doll maker. Something I would never have come close to doing had there not been the super-charged let’s do it! attitude of my little girl by my side. I never once entertained any thoughts to the contrary of excitement and success, because in the land of kid-imagination, there is no distance between thought and creation. That gap only comes to be when one reaches a certain level of (dumb) maturity.

I look forward to what she has in store for me next.