The Benefits of Viewing Tantric Yoga as Technology. A high precision car and a man bent up like a pretzel—which is technology?

The answer, perhaps surprisingly, is both. Tantric yoga is much more than simply the achievement of unmani, or oneness. While that is the highest goal, the immediate concern of any beginning practitioner has more to do with two major aspects: asanas mudras, and pranayama. Without these, the body does not have the ability to unchain itself from bondage.

The initial steps toward becoming a yogi can be rather rigorous. Fifteenth and sixteenth century yoga scholars studying the Tantric asanas offered some rather stern and reproachful advice concerning the first phase of training—postures.

In the 15th century work entitled the Raja Yoga, Yogi Svatmarama goes through the first chapter describing asanas—positions or postures in which to place one’s body. These movements, he illustrates, are specifically designed to enliven the body.

In this phase, a student isn’t remotely concerned with achieving Samadhi or any level of enlightenment or oneness. It’s instead an indoctrination process. The movements are designed to bring the pupil from whatever place he or she resides and bring them closer to the point where they can take full advantage of their life and vitality.

Indoctrination is an ugly word in our present context, but it’s quite simply the process of erasing old, bad programming and habits and replacing it, in this case, with more useful information.

An important part of that is muscle memory. The pupil is not encouraged to believe a single thing; simply being able to achieve these postures is shown as sufficient proof.

With asanas such as the Matsyendrasana, which is designed to awaken one’s kundalini and stir the appetite, the proverbial proof is veritably given in the pudding. In the words of the 15th century Yogi who composed the tome of Raja Yoga, “The practitioner will succeed; the non-practitioner will not. Success in Yoga is not achieved by merely reading books. Success is achieved neither by wearing the right clothes nor by talking about it. Practice alone brings success.”

This advice can be a bit harsh considering most of us starting off doing yoga in the West usually approach it more as a health and wellness exercise ritual. The truth of this spiritual technology is anything but; it is powerful medicine designed to reinvigorate the punishment we’ve placed our bodies by configuring them into a position that stirs the rejuvenating natural processes within them.

For men, especially, these asanas were geared for treating known health conditions that afflict them. Take the Siddhasana posture for instance:

Press perineum with heel of the foot.

Place the other foot above the penis.

Hold your chin to your heart.

Look with a steady gaze between the eyebrows.

At first glance, many students would struggle with the flexibility and composure necessary to get into this posture. However, beyond the struggle lie the golden gem of tantric asanas—and their benefits.

These asanas were not designed with the sole purpose of procreation. They were designed to awaken an awareness within the practitioner as well as heal the body of disease. We’ve all taken our bodies through wear and tear. Each asana serves a purpose—and it’s not to prove its efficacy through impression.

In each of these postures, the health of the prostate and the reproductive organs is allowed to flourish. Too often we maintain uncomfortable sitting arrangements and we place unnecessary stress on organs which have been prone to develop cancer.

These asanas are relics of a technology developed by Indian practitioners to share with the world around them. There’s no sales pitch or clothing line involved—simply the gradual progression of trial and error until these postures are maintained. At that point, the fruit of your labors will be present. 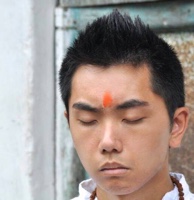