In May 2014, I took a road trip to Telluride for the Mountainfilm Festival.

The event was beyond inspiring and the bike style was fantastic. On Saturday of the festival, myself and Tanya of Bike Stylish did a pop-up photo booth under the Mountainfilm Banner, which is how we met the Plantz Family.

Jack was riding around with his baked potato stand with older brother Will hanging out on Colorado Avenue, Telluride’s main street.

Mark, the Plantz Patriarch, was cruising around on his Penny-Farthing with photographer mom Melissa running around capturing the happenings of the festival. 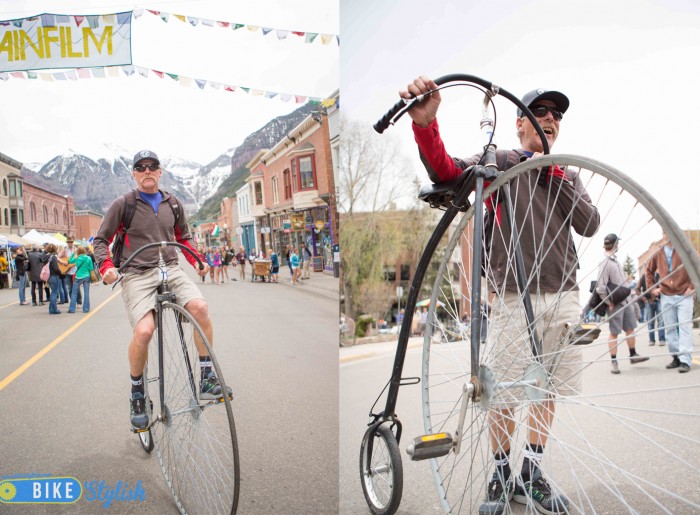 The amount of fun in this family was contagious and we knew we needed to see Mark’s garage full of “franken-bikes” as he calls them and photograph this Bike Stylish family!

The Plantz family are fantastic, the kind of family that makes you want to leave the trappings of modern life behind move to the mountains and get on a bike. With this inspiration in mind I called Melissa to get a bit more background on this fun-filled biking family.

How did you get into biking?

Growing up in Virginia I was never intimidated by biking. I always rode my bike. Biking to me is freedom! When I was a young kid, biking is how I got to where I needed to go. Biking was my horse—that’s how I saw it. Growing up no one else in my family bikes—I was the biker. Melissa as a girl on her Chopper

How did your family get into biking?

We met when I was working next to his downhill mountain bike touring company in 1990. I would go along and photograph his clients on their rides and eventually he hired me to be a guide.

One day Mark started fabricating a story about how we were married to the clients as a joke, telling them, “Oh Honey, ride on ahead to pick up the kids from preschool.” At the time I thought that he was crazy, but a few years later after we were married and had children our joke scenario actually happened.

When we did have kids, biking was always a big part of raising our kids. We started towing them in a trailer. As they got bigger, they would bike as long as they could then put their bikes in the trailer when they got tired. We live two miles from school so they biked to school most of the year.

Even though we all bike, we’re not hard-core bikers. Jack likes to mountain bike, but Will is more into road biking and bike commuting. We don’t do biking vacations, but we do travel a lot together. Right now my kids are really into climbing, so over the summer we did a big road trip adventuring and exploring together.

Mark is always working on bikes, he had a business called Recycled Bikes were he would fix up old bikes that people didn’t want anymore and make them usable (and fun).

The Plantz Family has a plethora of unique bikes including Mark’s self-described ‘”Franken-Bikes.”

What advice would you give to parents trying to get their kids into biking?

My advice for parents, for biking or for any outdoor sport: make it fun! A lot of parents that are hard-core into their sport, they want their kids to be hard-core. But the first thing is it has to be fun! Kids want to please their parents, they are scared of new activities and want to try hard; make it easy for kids to get started.

Creating positive associations early on—kids just want to have fun—they aren’t into the hardcore adventure like the parents. You can’t pressure them to want an intense experience. I am still that way too! I think people think I’m intense with my sports. I’m not doing it to be intense—I’m doing it to have fun!

What advice do you have for women who are intimidated by biking?

Just get on the bike and do it—don’t worry about what anybody else thinks! 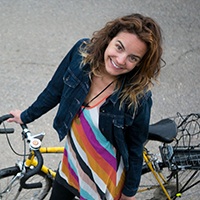 A pragmatic idealist with a background in creative production and communications, Jeanne has seen firsthand how for-profit businesses can be vehicles for social and environmen… Read full bio