The Stigma of Poverty. 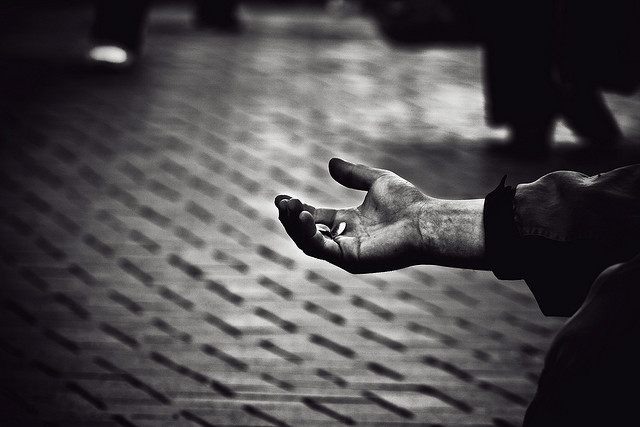 As I was waiting in my car at an intersection today, I noticed a depressed, tired, sunburnt looking woman holding a sign that said “Homeless, Please Help with Food.”

I also overheard a man in another car say very loudly to someone, “If she needs food so bad, why is she so damn fat, she’s not homeless.”

I motioned to her and handed her a couple of crinkled dollars I had in my purse. She gave me a warm “Thank You” and a strangely innocent smile.

It doesn’t matter to me whether or not she is actually homeless or not. What matters is that she felt the need to stand out in the heat, near heavy traffic and pollution, and beg for money, while most people just passed her on by without even seeing her at all.

She was probably invisible to most people, who had just left a mini-mall like me, on a busy Saturday, just trying to get to their next errand as they whisked by in air-conditioned cars.

She even had a small dog with her in a cardboard box and what looked like a garbage bag filled with books, clothes and a flowered-print pillow decorated with blue lace.

I don’t know who she is, where she lives or doesn’t live, whether she dines out lavishly over five-course meals each evening, or whether or not her standing there at this particular intersection was the fault of her own or just due to some very bad luck.

The fact is that she was there, and that our human paths seemed to cross for some reason at this exact time on this earth, and I feel grateful that, for whatever reason, I am not the one who was there with a cardboard sign, a box, a garbage bag and a thirsty dog.

Doesn’t that man from the car who made that comment know that many people who suffer from poverty also suffer from obesity and are actually malnourished, since cheap and fast foods are extremely high in calories and devoid of any nutritional benefits?

Doesn’t he understand that maybe, just maybe, she might have been mentally ill or challenged in some way and that she was doing whatever she could to survive, at least for today?

Doesn’t he understand that the fact that she was standing there at all and asking for money and food means that she was asking for help in some way, and willing to ask from complete strangers?

Doesn’t he understand that not everyone has it easy or even partly easy and that we all end up where we are, and that often there is nothing at all that we can do about it?

I have a secret.

I was once very poor and nearly homeless for about six months because I left a bad marriage and my daughter and I needed a little help for a small amount of time.

But I got through it because I reached out for help from some very kind strangers.

That is the stigma of poverty.

Whenever I see anyone asking for help, I take notice—as we all should, because none of us are very far away at all from being that woman I encountered today, or the millions of others who also find themselves in her position.

She is somebody’s daughter, someone’s granddaughter and perhaps someone’s mother and sibling.

But at all that should really matter is that she is a human being and that she was asking for help, without violence, without anger and without ruining anyone’s precious day.

I hope to see her again one day.

Hopefully next time it will be under better circumstances, and we could even share a cup of coffee together—on her dime.

We can only hope, and in the meantime, we can help others out whenever we can.