What makes a Self-Help book a Must Read? 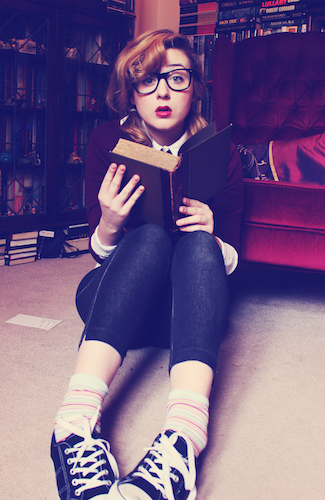 Three months ago, I bought my first self-help book.

The title put me off a little, but I was desperate. I did the exercises, and hot dang, I started to feel better. Then slowly calls started coming. “So uh…did you say you actually bought that miracle book?”

The book, May Cause Miracles by Gabrielle Bernstein, is my first every honest to God (there’s a lot of God in there. But you can substitute “God” with “Holy Arancini” and it still works) self-help book.

No one wanted to buy it themselves, but at one point it was on such heavy rotation that pick-up and drop-offs were arranged for my letterbox when I was out. “I’ll have to keep it under my bed so my housemates don’t see it,” said one caller. “But it works … right?”

They all probably work to a greater or lesser degree. But with millions of self-help books and columns pumped out every day, why do some become “must cross town to pick up from friend’s letterbox tonight,” whereas others remain unread and unloved under a pile of dirty knickers?

They confirm something we’ve suspected (Timeliness)
“The self-help books and columns I turn to tend to highlight discussions I’m already having with other women over coffee/drinks/dinner,” says corporate consultant Rachel Thomson. “Cult-favourites like [business strategist] Marie Forleo or Leo Barbuta of zenhabits, for example, cover many of the topics I was speaking to friends about before I found them.

In the 80s and 90s “push through/be tough” writers were all the rage. Post 9/11 and financial crisis, self-help books of every genre have a more spiritual bent. Sexed-up women’s spirituality is now practically a genre in itself, preaching unapologetic optimism with a practical application.

The New Yorker calls the stars of the genre, authors like Bernstein and Kris Carr, the “Spiritual Cowgirls“. “[They’re] a new role model for New York’s former Carrie Bradshaws—young women who are well versed in New Age spirituality, finding a way to make a living preaching to eager audiences, mostly female. It’s clear they are proffering guidance at a time when urban women like themselves are eager for it.”

“I’m often reluctant to talk about challenges for fear I appear like I’m not coping. But a book or columnist validates what you’ve already felt by putting it in the public eye,” says Thomson. “Often these authors are speaking to a need I didn’t even know I had. They give my unconscious desires or fears a conscious form, and hand me a roadmap for implementing change.”

Same message, new delivery
Most of the content is nothing new (May Cause Miracles, for example, is a reinterpretation of Marianne Williamson’s 90s bestseller Return to Love, which in turn is based on the 70s bestseller A Course in Miracles). But they’re delivered in a way we can digest.

Like Christian rock bands, they work hard to remain relatable and aspirational. “They’re very human,” says Thomson. “They swear a lot, but they work hard at their own practise and are honest about being far from enlightened.”

Credibility
Sure, no one has every aspect of the life/thing sorted (Gwyneth Paltrow excepted), it’s still somewhat shameful to acknowledge that not only are you fearful/inept in some areas, but that you are seeking help from, of all things, a book.

When Self-help is re-framed as Psychology? Much less stigma. Sure the content might be standard self-help fare, but the psychology tag makes it a more “fascinating topic to share” than “desperately seeking a clue.” Bonus points when they’re penned by a TED Talker.

And I’m unfailingly amused when people attribute the quote, “Our deepest fear is not that we are inadequate …” to Nelson Mandela, instead of the author from whom he borrowed it: Return to Love’s Marianne Williamson. It seems there’s more credibility in sharing the quotes of an esteemed freedom fighter, than a middle class Western woman with a soft-focused author photo.

Authors and columnists on the rise are now the sassy ladies who’d probably be loath to class themselves as self-help. Get Bullish’s Jen Dzuira is refreshingly fluff-free and practical, and columns (such as, Maybe Work-Life Balance Means You Should Work MORE and Dealing with Short Men and Their Various Battles for Dominance) are shared widely.

The latest columnist-turned-cult-self-help-author is Cheryl Strayed (a.k.a “Dear Sugar”), whose book Tiny Beautiful Things became a surprise hit when her response to this reader (“Dear Sugar, WTF WTF WTF? I’m asking this question as it applies to everything everyday. Best WTF”) was shared more times than the Game of Thrones finale.

My father’s father made me jack him off when I was three and four and five. I wasn’t any good at it. My hands were too small and I couldn’t get the rhythm right and I didn’t understand what I was doing. I only knew I didn’t want to do it.”

Who could have guessed that her uncontrived response would launch her literary career?

“Ask better questions, sweet pea,” she writes in closing. “The f*ck is your life. Answer it.”