Camp was always a safe space. A bubble removed from the harsh realities of the outside world. A place where it was okay to cry, okay to love and okay to grow in ways that didn’t seem possible in the outside world. It was a haven for myself and all of my friends that took part. For lack of a better word, it was magical.

As humans, we are tribal people. We need community. There’s a reason that sitting around a campfire —an iconic part of summer camp—feels good; we’re gathering with our people, sharing stories and making connections. We exchange and we learn, and in the process, we build a support system.

As I grew older, I transitioned from camper to counselor, an opportunity to create that safe space that I myself had so cherished for children and teenagers from a variety of backgrounds. Early on in my camp counselor career—I was young enough that I was practically still a camper myself, but when you’re 17 you think you’re the most adult you’ll ever be—I met Hannah.

When you work with children, it’s often easy to identify which ones are the natural leaders. Crazy curly hair and the most infectious smile, Hannah was one of them.

Hannah was in one of the first groups of girls I was ever in charge of, an important moment in my own leadership development. At the beginning of your own adulthood, working as a camp counselor has you concerned over the worries and fears of your campers. You’re busy trying to make the experience as positive for them as it once was for you. You never imagine that years later it is, in fact, them that have left an even greater impression on you.

Hannah became a personality at camp, the kind of camper that all the counselors knew, regardless of whether they were in charge of her or not. She became a core part of the camp community.

Hundreds of campers and several years later, Hannah was again part of one of my groups. To see a child go from awkward pre-teen stages to well spoken teenager on the cusp of adulthood and filled with dreams is a beautiful thing. Not having any children of my own, it’s my only experience that makes me think that I have even an inkling of what parenthood must be like; to take part in someone’s development, even on a tiny scale, is to be reminded of what it means to be human.

Last year I learned that Hannah had cancer.

She wasn’t alone; another young woman in the same community of “camp people” as we call them also had cancer.

I started to think seriously about what it is in our culture and society that’s breeding cancer at such a young age. According to the World Health Organization, cancer rates are expected to increase 57% worldwide over the next two decades. While much of that figure is linked to humans living longer, it doesn’t all have to do with old age. I can’t help but think about all of the modern-day factors that have influenced the increase in cancer rates, chemicals in particular. We have many more known carcinogens in the environment today than several decades ago.

I am not a doctor, but when people around you begin to be diagnosed with cancer, particularly young ones, you begin to speculate, do a little research, and wonder if our modern way of life might not just have something to do with our state of health. I think it does.

Hannah passed last week. She was 26. Just the week before I had caught up with another former camper of mine; nowadays a beautiful grown woman who is traveling the world and saying yes to every challenge that comes her way. It was a mind-boggling juxtaposition that numbed my brain.

When someone older than you passes, you honor their well-lived life. You grieve, yet deep down there is an acceptance that death is the only sure thing that this lifetime gives us.

When someone younger dies, we resist. We get angry. We forget about that one truth of life, because we’re told that we should expect to live long and healthy lives. Because it’s that story that keeps us going, keeps us hopeful.

We are not only hurt by the passing of our friends, but that sadness also masks our deeply held fears. We are left standing in front of a mirror, staring into a reflection of the eyes of our own mortality.

I think a lot of people have a Hannah in their lives, and if you don’t, statistics show that soon you probably will. That’s a dark reality that we all have to face.

Hannah wasn’t a family member, or even a close friend, but she was an acquaintance that represents a period of my life that had a huge impact on me. She was vibrant, open, accepting and fun, just like so many of the people that I love in my camp community from so many years ago. Now, she is a reminder that life is short. That everyday is yet another chance to be better, do better.

In the days since her passing, Facebook has been filled with messages posted to her wall, messages intended for her, but that in a dark moment, are much more important for the people left standing around her. They hold her memory and bring a community together. They create a digital support network.

I can’t help but think that in today’s modern, busy world, it’s only in the face of darkness that we come together. We don’t take time to write that letter, make that call, plan that dinner. We push it off until tomorrow. And the next day. And the next day.

If Hannah’s passing is a reminder of anything, it’s that we need to come together in the times of lightness. We need to tell people that we love them and respect them when there isn’t an imminent danger. We need to reach out and say hello to an old friend not because they’re in risk of passing, but simply because hearing from an old acquaintance is a heart warming act. We need to hold each other tight, because ultimately, our community is all that we have.

In this complicated, often scary modern world that we live in, we need more human connection. With old friends, with new friends. Let’s gather together in the darkness and create light. 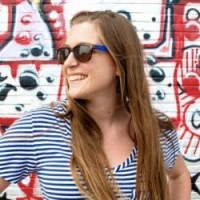