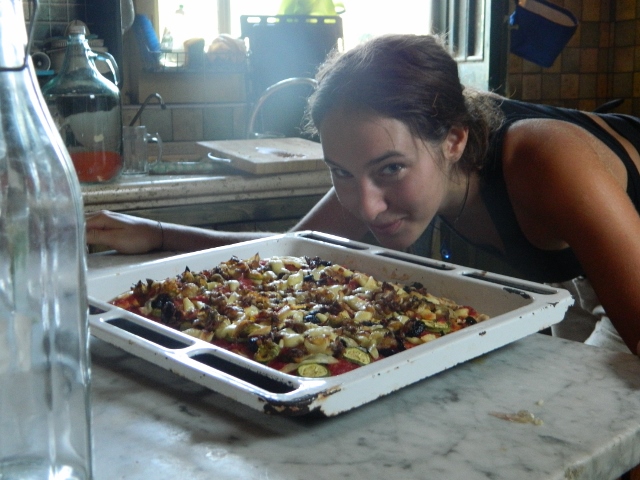 Some of my most vivid memories take place against the backdrop of kitchens.

Standing on a step-stool to beat eggs at the counter beside my mother. Learning to stir onions—slowly, carefully, watchfully. Observing my grandmother’s seemingly magical ability to know how much butter or salt to add to a pot.

It was the women in my family who really taught me how to cook. Their example guided the most complete, informal education I have ever received. Through watching them, I developed a sixth sense for food—an ability to feel without measuring what is enough. Enough salt, enough oil, enough time.

When I grew up and started cooking for myself regularly, I prided myself on never using recipes in the practice of my art. I naively assumed most people my age would have received similar educations at their mothers’ (or fathers’) sides. I expected those around me to share this passion for cooking and life—indeed, they are one and the same to my mind.

I could not have been more wrong.

“Today, the typical American spends a mere twenty-seven minutes a day on food preparation… Somewhat more than half of the evening meals an American eats today are still “cooked at home,” according to the market researchers. That sounds like a lot, until you discover that the meaning of the verb “to cook” has been defined radically downward in the last few years… To cook “from scratch,” [the market researchers] decided, means to prepare a main dish that requires some “assembly of ingredients.” So microwaving a pizza does not count as cooking, though washing a head of lettuce and pouring bottled dressing over it does.” ~ Michael Pollan

This information, taken from Pollan’s (brilliant) book, Cooked, floored me the first time I read it. This is what it means to cook today? Putting lettuce on a plate, or sandwiching meat between two slices of bread?

I am part of a dying breed, I realized. I cook.

And by cook I do not mean I prepare food that “requires some “assembly of ingredients.”” I mean I chop onions and beat eggs; I roast vegetables and make salad dressings in a jar; my meatballs start with ground meat and my curries with raw vegetables and whole spices.

Of course, I exist at one of the spectrum, and I recognize that not everyone has the time, inclination or practical knowledge to make everything from scratch. I ferment my pickles and cabbage and sometimes bake my bread, too, because I love DIY projects. I don’t expect everyone to share that passion. What worries me is that many Americans don’t know how to make a simple stir fry, and worse, don’t seem to care that they lack this knowledge.

And then, not having time to cook may be more a matter of priorities than hard reality. Pollan points out,

“When you consider that twenty-seven minutes is less time than it takes to watch a single episode of Top Chef or The Next Food Network Star, you realize that there are now millions of people who spend more time watching food being cooked on television than they spend actually cooking it themselves.”

Why take time out of our “leisure” activities to do “work” when prepared food is so widely available and inexpensive?

For me, the answer is simple: cooking, preparing and sharing food are absolutely fundamental to being human. That is what I believe. It has saddened me to find I belong to a shrinking minority who feel this to be so.

When I began to cook for friends, I witnessed the remarkable power that frying onions and garlic have to draw people together around a fulcrum of mouth-watering aromas. I have seen first-hand the magic spell cast by a loaf of baking bread, rendering the coldest of rooms warm and inviting. I have marveled, repeatedly, at the transformation from raw vegetables, proteins and grains to a meal that satisfies—a transformation that takes place by my own hands.

Through cooking, I have achieved an understanding of myself as a nurturing and creative alchemist, possessed of a near-supernatural ability to transmute ingredients into food. These traits are not special; they are not exclusive. Indeed, they exist within every single person reading these words… it is merely a matter of unlocking them. I have found that cooking is the key.

Still, I refuse to accept it. I will continue to cook. One day, I will ensure that my children learn both the art itself and its appreciation. I will invite my friends to dinner and share my secrets. Because they are not, in fact, secrets— I believe at this point in human evolution this knowledge, this ability, is in our bones, coded into our DNA as instinct.

Cooking is a dying art, and we, the people who stubbornly, proudly cling to it, are a dying breed. Happily, there has never been an easier way to thwart extinction.

What can we do about it? It’s simple: we can cook. Again I will draw from Cooked, as Pollan has articulated the power of this reclamation perfectly:

“To cook for the pleasure of it, to devote a portion of our leisure to it, is to declare our independence from the corporations seeking to organize our every waking moment into yet another occasion for consumption. It is to reject the debilitating notion that, at least while we’re at home, production is work best done by someone else, and the only legitimate form of leisure is consumption. This dependence marketers call freedom.”

These trends, though most frightening in the U.S., are global, and they impact all of us. Yet the value of cooking—it’s power and beauty—remain undiminished. To some, cooking may seem obsolete or pointless. It may seem inaccessible. This is a plea to embrace it anyways. Keep cooking; learn to cook; teach others how—it is a straightforward path to well-being, connection and empowerment, and no matter the new technologies that come along, it is worth holding onto.