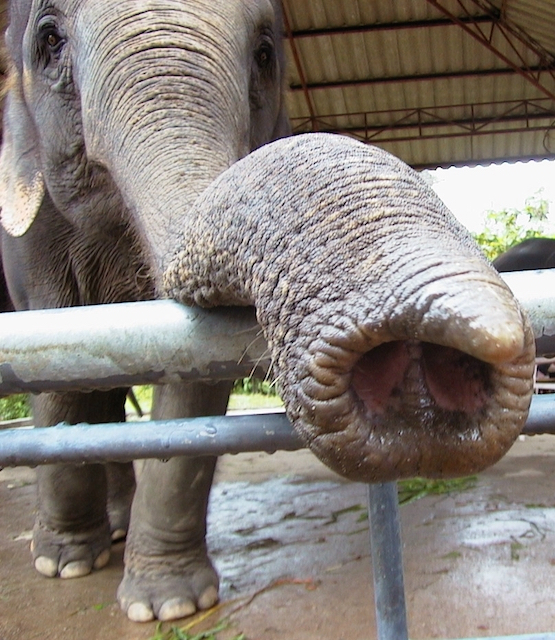 This story is both heart-crushingly sad and deeply maddening.

“Lucky” is an Asian elephant who has been living alone at San Antonio Zoo since her last companion, an African elephant by the name of Boo, died last year.

Over the course of the last five decades she has experienced several periods of solitary confinement, and the zoo now intends for her to remain alone until she dies.

Elephants are highly social animals, and according to new guidelines introduced by the Association of Zoos and Aquariums (AZA)—which all AZA accredited zoos must be in compliance with by September 2016—elephants are not to be held in captivity without companions. Each zoo must hold a minimum of three females, two males or three elephants of mixed gender.

This means that Lucky should have a minimum of two companions, or be moved to another facility.

However, San Antonio Zoo has no intention of acquiring any more elephants while they have Lucky at the zoo, but are planning to acquire African elephants after she dies. And they have decided to hold onto her until her death, even though this will be contrary to the new regulations.

An elephant sanctuary in Tennessee has offered to take Lucky at no expense to the zoo, but the zoo refuses to agree to the move.

Given the sociable nature of elephants, the plan to keep Lucky in solitary confinement until her death is considered cruel by several animal rights organisations campaigning for her release to the sanctuary. In addition, they are claiming that she is suffering from foot infections due to unsuitable substrata in the floor of her enclosure, and she is displaying typical signs of psychological stress through swaying and rocking behaviour.

Her pen is a barren plot of just half an acre in size, with minimum shade and a pool not deep enough for her to fully submerge her body, which would be normal behaviour in the wild. The ground is a hard surface which typically gives rise to orthopedic issues in elephants and can also give rise to arthritis.

Now 54, Lucky has been in San Antonio since 1962. A transfer to the sanctuary would provide her with the freedom to roam relatively free in semi-wild conditions, along with the opportunity to bond with other Asian elephants.

The zoo has cited several reasons, all in the name of Lucky’s welfare, for not releasing her to the sanctuary.

But activists dispute the integrity of these arguments. Lucky performs tricks according to zookeeper commands and is a popular attraction at the zoo.

Firstly, the zoo claims she is “weird,” preferring human company to other elephants. This claim is refuted by activists who point out that she has lived with a mix of related and unrelated elephants (which shouldn’t happen) and has bonded with some and not with others. This is hardly surprising given the unnaturally small space they’ve shared, along with the difficulty Asian and African elephants have in communicating with one another (it is contrary to AZA regulations for African and Asian elephants to be housed together).

In the past, Lucky has bonded with other elephants housed with her, but it has been her great misfortune since 2007 to have shared her space with an African elephant (Alport), followed by Boo (also named Queenie), who suffered years of abuse as a circus elephant, neither of whom she got on with.

The second reason cited by the zoo for refusing the move is Lucky’s age. They say that the transfer would be too stressful and place undue pressure on her health for an elephant of her age. However, several elephants across the United States have been moved during their 50s and are now happily enjoying their retirement. While the move would undoubtedly be stressful for her, it would be temporary, with the ultimate outcome of relieving the long-term stress and loneliness of her current situation.

The third reason cited is issues around feeding. According to the zoo’s director, Steve McCusker, Lucky’s teeth are in a poor state and her food is ground up to help her eat. He implies that Lucky would go hungry if she were moved elsewhere as she would be unable to chew bark. However, the Elephant Sanctuary in Tennessee provides individualised care for elephants, and, according to their sanctuary standards for elephant care, their nutrition needs are very well cared for. So, this would appear to be another invalid argument.

The organisation In Defense of Animals has named San Antonio Zoo on their list of the Ten Worst Zoos for Elephants six times in the last ten years. In 2013, it was listed as number one.

Despite their condemnation of the zoo, the AZA has granted the variance that enables the zoo to keep Lucky. I find this decision incomprehensible.

A move to the sanctuary would provide Lucky with a very different existence for the last years of her life. And after performing and earning money for the zoo for the last five decades, surely she deserves a happy retirement.

Although made in 2009, the following video gives a good overview of Lucky’s history and the issues surrounding her confinement:

What can you do about this?

If you care, take action:

Boycott the zoo.
Write to Steve McCusker appealing for him to change his mind, and inform him that you will be boycotting the zoo for as long as this policy remains in place.
Write to the Mayor of San Antonio.
Attend the next protest on December 7th.