When the Waves Hit: Remembering the Tsunami 10 Years Ago Today. Long before marriage, kids and running my own yoga business I lived a carefree existence travelling the world, hungry for new experiences and meeting new people.

I taught English in Hong Kong for many years and spent three years teaching scuba diving in tropical places like Mirconesia, the Egyptian Red Sea and Thailand. The last place I lived and worked was on the island of Koh Phi Phi, an impossibly beautiful formation of islands in the Andaman Sea of the Indian Ocean.

It was a dream existence. If my feet weren’t barefoot they were in flipflops, my only mode of transport my BMX, my attire no more than board-shots and a bikini. My job required me to spend hours doing what I loved everyday and in the warm muggy evenings I sat on sandy beaches and watched fire performers with my friends.

It was innocent and transient and as a young women in her 20’s it was formative and empowering.

My dive centre was busy. Phi Phi is where the movie The Beach was filmed and a popular tourist destination. We were a committed team of instructors and we worked hard. In late 2004 as we approached the peak of high-season, Christmas time, I got a strong sense that I should return to Ireland to visit my family. I look back at this decision and realize that whether it was, intuition, luck or fate—that decision to return home was the most important one I have ever made.

I approached my boss, who wasn’t impressed that I was leaving our team at such a busy time, but I assured her I would be gone no longer than a week and packing nothing but a carry-on bag I booked a last minute flight. With barely time to say goodbye, I boarded a flight and headed for home.

On Christmas Day I received well wishing texts from my friends on Phi Phi, hours ahead and partying that night on the beach. I pictured them there, and part of me was still there with them—my skin tanned and glowing, the smells of Asia still on my clothes as I sat in the familiarity of my childhood home.

My Thailand family. While we hadn’t known each other as long as I’ve known many of my close friends, anyone who has lived alone in a country far from home and in a culture so different to their own, know that the friends you meet become your family and we shared a special bond. Each of us living so far from home, each of us needing to find the comfort of family in our community. 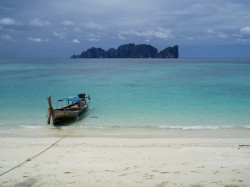 Within hours of those texts coming in the most drastic, devastating and unimaginable thing happened. It changed everything forever.

When the waves hit, no one knew what to do.

Parts of the island were completely obliterated as the shallow shores meant that a violent wall of water destroyed everything in seconds. Other parts of the island were subjected to flood like conditions where the sea rose dangerously fast. The water met in the middle. The result was a tragedy beyond comprehension.

I was woken that morning, the 26th, by my brother who had just seen the news. At first, when the early death toll was pronounced as 20 on the island of Phi Phi, I felt sick to my stomach at the thought that so many people had lost their lives on my tiny car-free island. As those numbers soared and reached the thousands, I became numb and went into shock.

I felt disconnected, even when the news broadcasts showed two of my friends, bandaged and injured helping a stretcher onto a helicopter.

It was like a dream. I didn’t eat, I didn’t sleep. I was calm and quiet.

When I did make contact, the horror stories were too sad and too horrific to repeat. Reiki finally brought sleep. I woke 24 hours later in the same position I had slept in. But I woke a different person.

Years later and the haunting sadness of that natural disaster has never left me. I have carried it around with me and I carry it alone. I returned to Phi Phi months later and then regularly until my family grew and travelling so far became less easy. I still have contact with some of my friends who survived. Some of whom still live there, many of whom have left.

I have done much work with yoga, meditation, healing and kinesiology to help release the sadness, fear and loneliness of that ending. But most especially the guilt. The guilt that I wasn’t there. That I had missed it by three days.

That not only was my life spared, but that I was spared the whole horrific experience.
10 years on and I can still feel that heavy, sickening weight in my belly. Perhaps it will never leave.

The last 10 years have brought much love, opportunity and abundance my way and I haven’t missed a second of life. I haven’t wasted any opportunity I have been blessed to have. As a result of losing my home in Thailand I ended up working in the Swiss Alps, saved in my grief by a friend who took me under his wing and brought me to the snow to heal. It was as a result of this that I was reunited with the man who was to become my husband, the father of my three beautiful boys and my business partner in our yoga dream.

As I look back at the 10 years that have passed, I still mourn that carefree girl who cycled to work in her flip-flops with the wind in her hair and not a care in the world. I know that I can never have that innocence back.

But in remembrance of all those who lost their lives in the tragic tsunami of 2004 I vow to do my best to be grateful for every day I have on this Earth.

I will never forget. 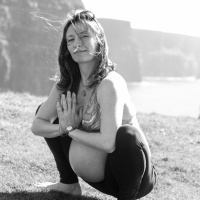