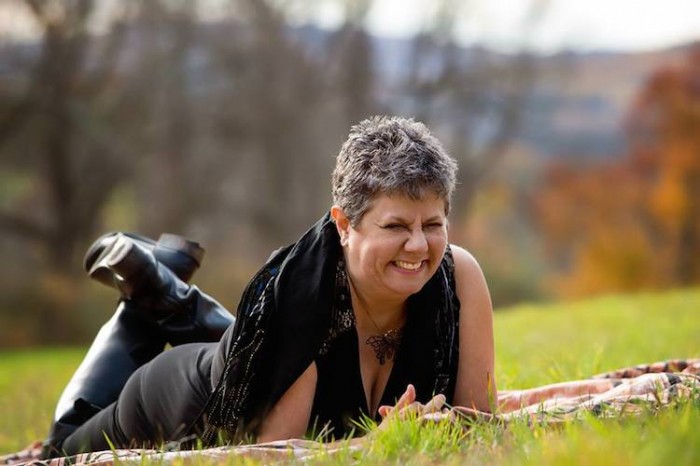 Once upon a beautiful summer morning…

I was on my way home from a “normal” workout, which I had referred to as “play outs,” because it felt more fun to call them that, at Planet Fitness (a.k.a The Judgment Free Zone) where I would sweat it out 5-6 times a week.

The daughter of a consummate gym rat, who in his 80s and still worked in a gym until Parkinson’s Disease took his vitality, it was a place where I could also commune with my dad’s Spirit. I would often hear his encouraging voice when I had wanted to throw in the towel…literally.

“Come on, Doll Baby, you can do it. Five more minutes, a few more reps.” Wonder if that’s one of his jobs in Heaven. It wouldn’t surprise me if he dons shorts, t-shirt and “sneaks” as he called them and coaches others to work out.

I was driving home, likely singing along to a song on the radio when simultaneous sensations hit me like a ton of bricks. Even though I had cooled down at the gym, a torrential sweat overtook me and I was drenched in an instant. My jaw locked up and searing heart burn pain radiated across my chest and back.

I intuitively knew it was a heart attack in progress. I did what any overachieving, workaholic, Type A person would do. I drove home, called to cancel an appointment with a client and then thought “Hmmm. I’m really sweaty. I should take a shower.”

I hopped into the Jeep and drove 10 minutes to Doylestown Hospital, which fortuitously is in the Top 100 for cardiac care in the country. When I arrived, I casually and not overly gracefully stumbled through the door and said rather calmly, “I think I’m having a heart attack.”

Within moments, I was whisked via wheelchair to the cardiac cath lab where a stent was inserted. Since laughter is healing, I am remembering a humorous moment, when the nurse, in preparation for the possibility of needing to have it threaded through the groin rather than wrist, said “You’re going to hate me, but I am only going to shave you on one side.”  I asked if she couldn’t do a “landing strip.” She joined me in the giggles and informed me that I was on my own to do that when I got home. I’m grateful that the pin hole in my right wrist is what remains.

After a few days in the care of the wonderful staff of angels in scrubs on the cardiac unit, and the admonishment of friends, one who threatened to break both of my legs if I went back to work too soon and others who lovingly said, “I told you so,” I spent the next week and a half at home contemplating what the next steps on my life path would be.

A nurse on the unit had encouraged me, “Once you have taken time to heal,” to offer self care education for women, who like me, may have ignored symptoms for far too long. I was determined to take that suggestion. First, I needed to heed the first part of her message before embracing that new mission.

Healing looked like work. It felt daunting. It meant redefining my schedule and reinventing myself. Who was I without my role as caregiver for others?  Who would I be if I allowed others to care for me?  What if I was incapacitated? What if I couldn’t live the active life I had become accustomed to for the previous 55 years?

Dietary change and a med regimen felt like a piece of (low fat, cholesterol and sodium free) cake in comparison. My niece, as well as my sister who had experienced two heart attacks herself the previous year, went through my fridge and cabinets and tossed everything not in keeping with a heart healthy diet. I replaced pre-packaged veggie burgers with whole grains, organic produce and taking time to read labels and cook, rather than zooming through the grocery aisles and hastily throwing meals together in order to accomplish everything on my growing to-do list as I had prior to the cardiac event.

The next step was replacing those free-wheeling gym play outs with medically supervised cardiac rehab. I was taking all of this seriously, not letting the heart attack go to waste. Three days a week was all my insurance would cover at the time and I was grateful for it. I added walks in the in-between days and naps on all of them. That felt like more of a stretch than what I did at the gym, since the me I was before would rarely have napped as it didn’t feel productive.

Two weeks before the heart attack, I was offered a full time job working from home, writing web content for Elements Behavioral Health. Three decades of providing therapy for those with addictions, combined with my seat of the pants experience as a journalist had led to that fortuitous timing. It enabled me to leave a well loved, but high stress job as a therapist.

My six month check up was on December 12th at which my cardiologist commended my progress. I  had moved to the next phase of rehab in October and now go 4-5 days a week, for about an hour at a time. My home away from home and my new normal. I can’t go back to normal, as I knew it before, since it almost killed me.

According to Go Red For Women:

While in cardiac rehab on Friday, as I needed to sit a bit longer than usual to cool off and bring my heart rate down before I could leave, it occurred to me in ways that it hadn’t before that my life BHA (Before Heart Attack) barely resembles the life I live now.

Yes, I work and keep up with my responsibilities and meet deadlines and do all of the “normal people” things like cooking, cleaning and laundry. I also nap when needed, say no way more often, consider how I need to monitor my physiological functions and listen to my body-mind-spirit messages, rather than ignoring them. Since I bruise and bleed more easily, I need to be careful not to bump into things. Sometimes bruises just show up, uninvited.

These are some of my AHA (After Heart Attack) insights:

I do more things because I choose to, rather than thinking that I have to.

I have slowed down enough to let life catch up to me.

“No,” has become one of my new favorite words.

I have relinquished responsibility for meeting other people’s needs—whether they are family, friends or clients.

I have almost let go of the attachment to approval and wanting to be loved, best of all.

I have forgiven myself for what I can’t change from the past and welcoming do-overs.

I am putting down boulders that I had hauled around for decades; such a relief.

I have divorced myself from the memories to which I was married.

I have become more self compassionate, rather than self critical. Work in progress with that one, for sure.

I am accepting that a broken open heart has more room for love.

I count each day as even more precious, since I have become acutely aware that we never know how many will be granted us.

I am nowhere near as eager to pursue success, and instead, am allowing it to come to me, however it shows up, once I set an intention and then surrender it.

I am feeling abundantly blessed.

I am holding my own heart sacred.