From the Granddaughter of a Racist. 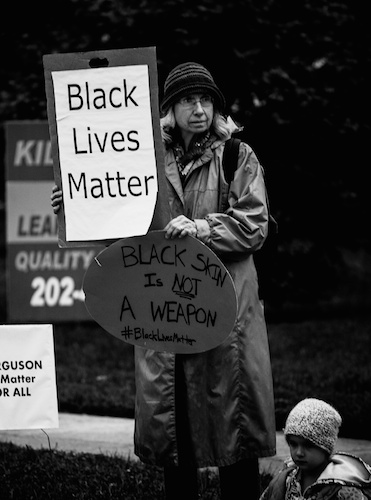 When I was younger, I was taught that nobody was different from anyone else, that we all bleed the same and that we all love and hurt the same. But, in the same breath, that we are all unique, as well.

It was a very complicated belief to be taught. The underlying message was an attempt to battle prejudice, I know. I grew up in a household with a mother who, as a child, could not tell her parents that her best friend was black, nor that she had eaten dinner with the Jackson Five.

I grew up with a mother who was jumped frequently on her way home from school by a group of girls in Yonkers who were black and heard stories of people wearing razors in their hair, but she was adamant that we do not know what other people have gone through and color did not matter.

I went to a school where there were more “minorities,” than the “majority,” colored skin. So she taught me differently than her own upbringing, or so I (and she) thought.

As I got older, I realized it was bigger than this simple truth, yet it really wasn’t. There was a complex web that was way older than I, and though I felt the untangling of it somewhat in the teachings I was told as a child, the first time I brought home a boyfriend that did not look like us, things became a little clearer.

I was encouraged to be true to myself and love with an open heart, as long as I didn’t tell my grandparents. It was joked about that I truly was the “black sheep,” of the family. I have often loved with an open heart, and this hurt. Not the joking and teasing and chiding, though that did not come without pain, but the waking up to the reality behind the words.

I looked around. I looked at my friends, my family’s friends, my family, my school and my neighborhood. I grew up on the lower side of the economic scale. Sure, I could relate somewhat to things that come along with poverty. The threat of eviction, coming home from school to the notice on my front door and taking it down before my sisters could see, utilities constantly being turned on and off and my mother borrowing a neighbor’s phone to call and plead for them to be turned back on.

I also experienced an enormous sense of community and connection. We helped each other. I mean, who else runs an extension cord from their house to yours so you can have electricity? And I didn’t understand the full extent of that then. That cord was more than a line. It was energy. It had a cost.

I am a woman. I feel the oppression and the power that women feel. I can relate to the struggles of the glass ceiling, of not being taken seriously. I am fat. I am a large woman and that comes with a whole other set of experiences, some not so pleasant, some incredibly stunning. I am queer, living in a world of heterosexual privilege, because I chose to marry a man instead of a woman, though my true attraction is to gender fluidity and my choice of life partner could have gone in a myriad of directions.

I have a physical “deformity,” that I inherited that I was relentlessly teased for growing up. No amount of “this is evolution,” or,” it’s because we are magical,” kind of talk could help ease the pain of the heart of the little girl who didn’t get it, who didn’t understand why she was being harassed because she was born that way. I can relate to people who are uncomfortable in their body and who get harassed for things out of their control.

I suffered through depression, suicidal ideation, self-harm and self-medication through alcohol and drugs, as well as adolescence. I eventually found myself again. I can relate to someone’s story of recovery.

Through all of these experiences, I was, and will forever be…white. Through all of my experiences, I walked out the door into my community to people who looked like me. I saw magazines with people who had my color of skin.The televisions showed predominantly white characters. I cannot apologize, nor will I, for being born that way, just like I will not for all of my other physical characteristics. I can, however, acknowledge that, because of the person I am, I consistently question myself. I consistently put myself to the test to see how I feel, to challenge my thoughts, and to inquire when I am ignorant. I try to keep any arrogance at bay, though I do not cower from my confidence. It is when I am blind, however, that I feel I have contributed the most to a deplorable situation and for that, I can apologize.

Blindness is tricky, particularly when one doesn’t know they are blind. It’s easy to believe the world is as you see it. That is what it means to have perspective. We make the world we live in. That is a paradox that both stagnates us and gives us the power to change it.

I sat with someone recently who told me story after story of injustices against people of color, right in my back yard, so to speak. These things were happening in a place where I have some responsibility. As they told me these stories, I began to see. I began to awaken and a flood of images from other occurrences came in and overwhelmed me. I was knocked on my ass so fast by my blindness, or waking up from it, that I needed a moment and excused myself. I needed to rebalance, though that doesn’t even begin to explain the feeling. It was more like an expansion. I was not willfully blind, but I realized that this was happening and I hadn’t seen it , because this awareness had not been a priority for me as there were so many other priorities. I had taken things for granted. I needed someone to bring it to my attention and that shamed me, and impassioned me. There is no going back to sleep for me in this arena.

These past few days, I have been affected professionally by people in my field making harmful, though maybe unintentional, mistakes. What follows those mistakes are even more important and I hope they choose to be a part of the healing rather than bow to their own fear, conditioning, and/or defense of their ignorance.

It is my hope that we don’t continue to retort in defense with things like, “But the first slave owner was a black man, ” or, “White people get killed, too,” or, “Many cultures have experienced prejudice and some others, slavery,” or an abundance of other things I have seen and heard lately. Those things are true, yes, but using them as a defense only further indicates fear and justification rather than awakening to the moment. This moment, where things are still not balanced. We all have the ability to part of the healing.

I saw, the other day, a meme that said, “Stand in front of a mirror and repeat, ‘black lives matter,’ three times and you will see a white person pop up and say, ‘All lives matter.'” It hit me hard. I do believe that all lives matter. I do believe we all bring our gifts and experiences to the table. I do believe that we all bleed and love and cry and a myriad of other things that make us all human. That is at the core of what I was taught as a child, but just like then, I understand that the scales are not even. To diminish the cause that Black Lives Matter with a protest against it only undermines the movement we need. I pray and hope we are still fighting for connection and equality for all, rather than domination as reparation, but the pendulum will swing where it must.