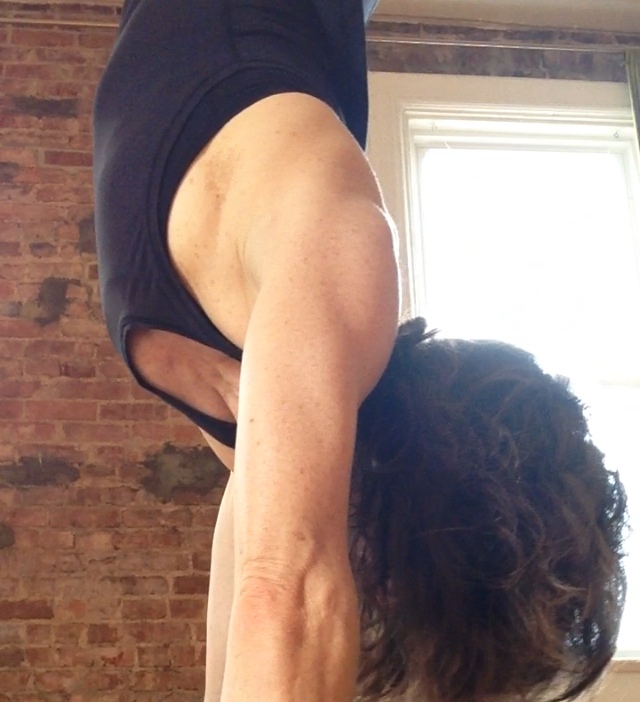 My handstands had left the building.

My yoga schedule was off, and so was my usual inclination to go upside down.

My handstands were missing, and I didn’t know how to find them. And I wondered if rearranging the furniture hadn’t actually been the best idea. After all, the armoire against which I’d practice my handstands was gone now, too. Maybe that was the reason?

It was a Monday night, and I arrived at practice for the first time in a week. I set up my mat and told the instructor what had happened, that my handstands had disappeared. It was not the first time they’d gone missing, and it made me feel back at Square One.

When you ask who’s new tonight, I said, I may not raise my hand, but I’m the one who’s new again.

I’m not sure why I had to confess, but I wanted someone to know!

The instructor thought for a moment, and then exclaimed that it was good to be new again, that I’d have the chance to learn from scratch.

Months earlier, a friend and I had stayed after class to work on our handstands. At that time, I had them down, and this same instructor came over to see what was up. He stood on his hands while telling us that handstands need to be fed every day. This made sense to me as I had been serving mine breakfast, lunch and dinner, and I tried a few of my own before standing up to hear what I hoped would be some good inversion tips.

But the instructor skipped over any such tips. This young man who could probably cross the room on his hands instead sat on the windowsill and at once began to talk about the point of the postures, especially the handstands.

Suddenly, my day turned as upside down as I had set out to be, and I hoped it didn’t show how much work it was for me to remain upright. Having felt so good from both my practices that day, I was surprised at how unsteady this topic made me.

I listened to him and forgot about the handstands. Instead, I asked how he came to know all this and how one is supposed to go about this healing.

I learn from my teachers, he said, and I surround myself with people who are good to me.

I didn’t know that healing and handstands were one and the same, that both were practices that needed to be fed every day.

It was several months past this discussion when I found myself in the week of my missing handstands. It was the Tuesday after the Monday I was new again, and I was putting my overclothes in a cubby at yet another practice as another instructor stood nearby.

While I stuffed away my shoes and my shirt, I declared that my handstands had left.

He obviously didn’t know from such catastrophic thinking, but his reassurances didn’t stop me from mine. And I didn’t mention how I’d connected the dots to conclude that my practice had left, as well. I struggled through the very hot practice that followed and was secretly relieved when there were no opportunities to invert. I hadn’t even been ready to try.

We sealed our practice with three Oms and, before I left the room, I stepped aside to look for my handstands. I lifted first one leg and then the other and felt my hips float into the air. I pressed into my hands and pulled in my core, and, slowly, the ceiling became the floor.

Do you see they’re still here?

It was the instructor. The room had emptied as I lingered upside down before standing up to hear what I hoped might be some good inversion tips.

But this instructor also skipped over any such tips and, before I knew it, I was back in that same conversation, the one that had nothing to do with handstands.

I thought they were gone, I said, as if my handstands had feet that could walk away.

Don’t even think that sh*t!

That was all it took for him to explain that it was me who had left and not my handstands. And I quickly understood that my search for handstands was indeed the same as a search for healing.

And so, in this apparent effort to heal, I made a bold reply.

As someone who gets teased for her clean language, I repeated his words, more to myself than to anyone else. And then he said it again to make it sink in, and I said it right back, so it would. I wanted to seal this message as I did my practice, so it could be with me for a while.

And then I got dizzy from what I think was the heat, and I had to sit down to rest. And from there I explained how I’d connected the dots, because I had to further confess. And he told me some more, without mincing words, but he spoke from compassion and love.

And that night I left with my hope intact, and the next day my practice was back!

My handstands returned from all that I learned, and I knew some healing had happened.