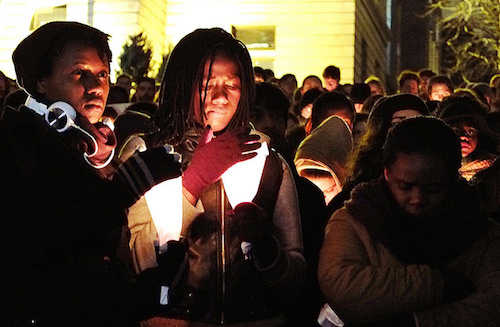 March 6 (Reuters) – Wisconsin police fatally shot an apparently unarmed African-American teenager on Friday, prompting dozens of people to protest at the site of the killing, according to police and videos published on social media.

Madison Police Chief Mike Koval told reporters that an officer responded to a disturbance around 6:30 p.m. local time and later forced his way into an apartment that the 19-year-old, who was also suspected of a recent battery, had gone into.

Koval said that a struggle between the suspect and the officer ensued and the teen was fatally shot, according to a recording of the news conference published by broadcaster WKOW.

“The initial finding at the scene did not reflect a gun or anything of that nature that would have been used by the subject,” Koval said.

I lived in the St. Louis, Missouri area until I reached the age of 18, and continue to visit friends and family there a couple times a year.

I have witnessed profiling, manipulating and downright racist actions of police.

One of these instances occurred a few months ago when I was home for the holidays. As I was walking down Delmar Avenue (called “The Loop,” home of the St. Louis Walk of Fame), I turned my attention to the confrontation occurring before my eyes.

A black woman was sitting on a bench outside of Blueberry Hill (a restaurant famous for Chuck Berry’s start up performances) when a local police officer walked up and asked her to move.

She responded with a simple “Why?”

The police officer replied that she was “detouring customers from the restaurant.”

The woman replied with another question, “How?”

The policeman obviously did not know how to answer this question, so the woman did not move. This urged the officer to use manipulation and force in order to “remove” this human (who he treated as trash) from the bench in front of a restaurant.

In 2012, following the death of Trayvon Martin (a 17 year-old black male shot by a neighborhood watch volunteer whom suspected him of a robbery in which he was no part of), the Black Lives Matter movement began.

In July of 2014, another black man, Eric Garner, was victim to homicide through the choke hold of a police officer, which was video recorded with clear evidence of the event. Garner was recorded repeating the words “I can’t breathe” eleven times before losing consciousness, and eventually his life.

In August of 2014, events in Ferguson, Missouri reminded this country why Black Lives Matter, and how we are avoiding this problem through many socially unjust ways. Black teenager, Michael Brown was shot by a policeman and the St. Louis area blew up with protests in favor of justice for Brown and all black lives.

In November of 2014, the police officer who shot Brown was not indicted for the murder of Michael Brown. Ferguson, followed by the rest of the country and the world, reacted with protests, both violent and peaceful.

In December of 2014, the grand jury failed to indict the police officer who was responsible for the homicide of Eric Garner. This gave way to a greater population to participate in Black Lives Matter protests, in support of Garner specifically, as well all victims.

For a short period of time, these protests gave attention to an issue that many citizens of the United States must face every day of their lives.

Since the events in August and November in Ferguson, as well as the protests following the murder of Eric Garner in New York, our country has returned to silence.

This silence is a message of our continuous fight for the respect of all lives.

Has homicide become an act of pride for police officers in America?

Is our government turning their cheek for the sake of the state?

This violence has come to us in vain and we must counter the brutal actions of our federal employees until the battle has been won.

I write with an intention to rekindle the flame within our society, to create an awareness of the decline in social action and to change the mind of every single person who does not agree that Black lives matter; not only straight black men, but lesbian, gay, straight, transgender, questioning, inter-sex and asexual black men and women.

The black minority is underrepresented in high school graduations and over-represented in poverty, violence, different abilities and drug use.

We counter these social issues with over-representation in prisons and jails, or death by oppression. Our attempts do not improve our society, they only mask the problems in order to uphold the “American Dream.”

Below is a poem I wrote inspired by all who have experienced oppression, and to those who have taken action against inequality in this society. It is dedicated to all that will continue to fight.

Born into a segregated, unequal nation
Coming home to a family in economical devastation
Profiled and scapegoated into criminalization

Defined as problem people rather than people who face a problem
Lonesome, fearsome, seldom experiencing freedom

Haunted by the day’s phantom promises
No victories just rants of chaos, sins and losses

The school bell rings for lessons of unity and scrutiny
The God of opportunities and sacrifice of civil liberties
Stuck in the past, no preparation for eternity

With no other choice, a human without a voice

Inevitable for some since the days of show and tell
From time out to suspension, then prison and hell
Domestication for all those who rebel

The time is now to resurrect from immorality
Return to serve and protect, fall back from brutality

Red, yellow, black or white, divided we fall
With criminals for officers that were “only following protocol”