How to be a Thriving Artist. 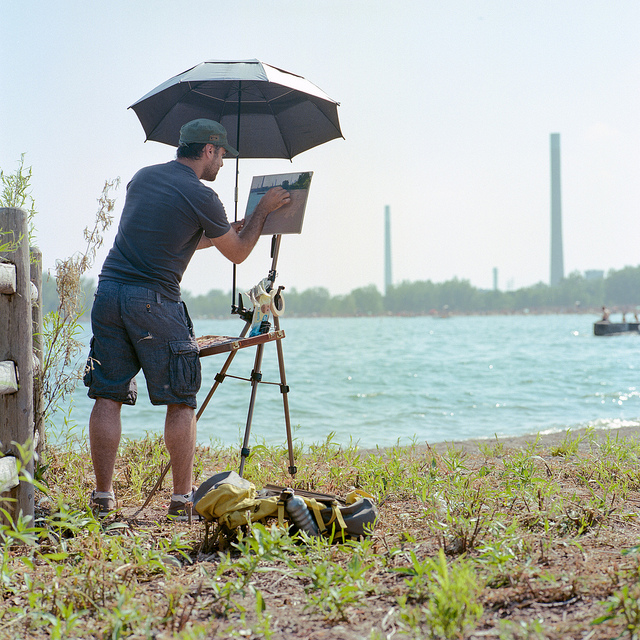 Creativity is our birthright.

As creations ourselves, we have within us the ability to carry that out into the world and often do so by writing, drawing, painting, sculpting, performing music, gardening, singing, dancing, healing and teaching. We may even use our creative gifts to provide our livelihood, and yet, for many in these fields, there is an erroneous belief that they are mutually exclusive and can’t dance together side by side.

Some questions to consider, and I invite you to journal about this:

What were you taught about blending your passion and profession?

How was it modeled for you by the adults in your life?

Of those verbal and non-verbal messages, what did you internalize?

The adults in my life were hardworking. My father was a blue collar worker—a milk man and then a bus driver, who rarely missed a day of work throughout his career. As my mom would often tell us: “Your father works crazy hours to support the family.”

My mother was a “pink collar” worker who had a series of part time jobs when my sister and I were young and when we were old enough to be latch key kids, she took a full time job as a switchboard operator. In addition, they volunteered in the community, raised us, took care of their elderly mothers, had a social life, as well as a thriving marriage.

I internalized their work ethic to an extreme, becoming a Type A workaholic.

Part of it was born of fear of not being able to support myself after being widowed at 40. Another aspect was that I earned approval and a sense of value by performing. The career I chose was social work and I earned an MSW; which stands for Master of Social Work, but my behavior manifested as if I was “Master of Saving the World.”

I met someone today who said that he referred to it as coming from the Mystical School of Wizardry. I think so too. Miracle worker/social worker. Same thing.

I would don my symbolic Wonder Woman cape and practice “savior behavior.” The social work mentality included self-sacrifice and I would hear myself say, as did many others in my field “I’m not in it for the money.” These days I cringe when I remember that. The prevailing belief is that somehow it was appropriate to put the needs of others before our own, as proof that we were committed to our client population and our jobs.

Social work is not generally a well-paid profession. Back in the early 1980’s, I remained in a job for which I wasn’t paid for months, since the county funding had not come in. Why did I stay? Because I didn’t want to let the director of the program down, since even she wasn’t drawing a salary. I laugh at the absurdity of that idea now.

This I did for more than three decades until a series of health crises that included shingles, a heart attack, kidney stones and adrenal fatigue at age 55, brought a tremendous wake-up call and re-evaluation of my life. I recognized that the ceaseless spinning was not serving my clients or myself.

I also did a sincere ancestral examination and asked myself about the wealthy role models in my family.

1.They were all men.

2. Any women who had financial wherewithal were married to wealthy men.

3. Even the well-heeled men were in mainstream businesses.

4. None were artists professionally.

What I gleaned from that was the creative soul that I was would need to prove herself in a field that was outside the realm of family tradition. My parents were not rich in anything but love and yet, we wanted for nothing material. Somehow they always managed to make ends meet. They encouraged me to follow my bliss professionally as long as I could support myself.

When I entered into the journalism field by co-publishing a magazine, I carried that same limiting belief with me. Lack and limitation, poverty mentality, settling for less so as not to offend anyone, hiding my light under a bushel, not wanting to be perceived as grandiose, living with the idea of sacrifice and hard work, not asking or expecting others to carry their share and keep their commitments, were part of my mindset at the time. It was not the best way to run a business or live a fulfilling life.

Take a look at your own business mindset. If you are a conscious entrepreneur, you have chosen your profession because there is some semblance of passion or joy connected with it. It may be something you have always wanted to do, but may have been told that you will never make a living doing it. You may even have believed that. Isn’t it time to challenge that thought?

Are you working in a career that nourishes you?

Is it something you feel you do well?

Do you look forward to going to work, whether it is inside or outside your home?

Are you in a field with like-minded/kindred spirits where there is mutual support or respect?

Have you ever used the term “starving artist” to describe yourself as if somehow, that was noble?

How do you feel when you call yourself that?

What if, instead, you reframed it and thought of yourself as a “thriving artist”?

Do you have yaysayers who support your creative dreams or naysayers who attempt to douse your fire?

Are you willing to call in more of the first and thank the second for sharing and shaking it off?

Ways to turn it around:

Know that your gifts do no one any good, if you keep them under wraps. That means learning to be shamelessly self-promoting. Ask yourself how your talents serve the world and how you can successfully offer them to potential clients and customers. It really is okay to blow your own horn.

Determine what your services are worth and ask for it without stuttering. A coach I had worked with taught me that. He was right and it worked. Once I did so, I began to bring in flowing streams of income.

If someone tells you that because you are in a helping or creative profession, you shouldn’t be well compensated, since you are of “service,” remind them and yourself that your creditors expect to be paid and charge you the same thing as someone who has more zeros at the end of their paycheck.

Some performers and speakers are expected to be on stage “for exposure.” Would they say the same thing to the owner of a restaurant? “I will eat here for free and if I like what you serve, then I will tell my friends and maybe they will come here too. It’s good exposure.” Of course not.

Recognize that when you charge for services, it isn’t about just showing up on that day. It includes your education/training, your experience, your prep and then presentation time. This is so, regardless of the field you are in.

If you are of a spiritual bent; and I don’t tell anyone what to believe spiritually, you may want to use this mantra, or create one of your own. Back in the spring of 2014, I began to say “I work for God and the salary and benefits are out of this world.” In short order, I was offered speaking, counseling and writing opportunities that now support me well.

Make lists and/or write yourself a story about your well compensated in all ways creative career success.

Claim your title of Thriving Artist.