In Response to “Looking Inside of Myself Instead of Down My Nose.” Dear Ashleigh Hitchcock, your article “Looking Inside of Myself Instead of Down My Nose” has opened up a can of worms in me and I love that about you!

Orphaned at six-years-old and adopted out at age eight made me shaky in my foundations. I wondered who I was and where I belonged. I was raised on a strange mix of fairy tales (which I told myself to survive and also which I read voraciously) and the dark reality of abuse.

There were many sides of me.

The side that wanted to be rescued, preferably by a man with money and a black horse and a castle.

The side that was told there are no fairy tales, life is hard, “get-your-head-out-of-the-clouds,” you need to behave yourself, but one day you will work as a secretary and might marry a doctor if you play things right and everything will be okay.

The side that dreamed of making peace with the Gods above and having a rational talk about why I needed to stay home with my kids because I was terrified to miss one moment with them because I still missed my own mama so much.

And, the side that was confused about money. I shouldn’t have to earn it because I was an artist at heart, and artists should not be bothered with mundane things when the spiritual is so much more damn interesting, but I would need to write in the South of France for three months a year even though they have scorpions, I am a Scorpio and don’t trust the world with sh*t and who was going to pay for that?

Oh dear! What a mess!

So what happened to me, in the end?

1. I worked hard, (not as a secretary), until I met a man who very much tried to make sense of my mess and who gave me two incredibly beautiful daughters.

I left him and my mess and tried on the next Prince Charming.

Prince Charming #1 is still my friend because he is a good man.

He worked hard so I could stay home with my daughters, even though professional hockey left him concussed and incapable of taking care of his own mess.

He did it because all the talk of not being at home with my children left me in screaming tears.

I knew that I could not replace those formative years with my daughters no matter what kind of money I earned.

3. I kinda worshipped those women who could work all day, run an immaculate home, have dinner parties, raise their children and still look beautiful.

I could not, and my hat is off to every working mother out there.

I tried it for a couple of years and blew out an ovary, literally.

4. I had access to a beautiful home, (that of my adoptive parents), their cottage and the generosity of my later widowed adoptive mother who shared her financial resources endlessly so, you guessed it—I could stay home with my kids.

Everyone rallied around my dream. My girls have not been to Disney World but they have been to the woods, where they learned to love the planet.

5. I ran a small homestead, where I raised organic food, heritage breed goats and chickens, free-running daughters, opened a nutrition clinic and wrote whenever my little heart desired.

I made little money so I was still intact as the artist who is above earning a real income.

Giving of oneself is a spiritual practice that will one day have the Universe notice me and give me that place in France, right?

Goddess, I was fucked up.

I began to read inspiring words that shifted my issues with money and my Self: “Sacred Economics” by Charles Eisenstein, Yes! Magazine, “Everyday Miracles” by David Spangler, Eckhart Tolle, Osho, Paulo Coelho.

I trekked miles and miles across England in walking meditation.

I became a Witch—and listened to the wisdom of the Goddess.

I’ve sojourned at Findhorn Community in Scotland with my love, to experience community and ourselves.

I learned how to make things happen by co-operative effort between myself and all that is. 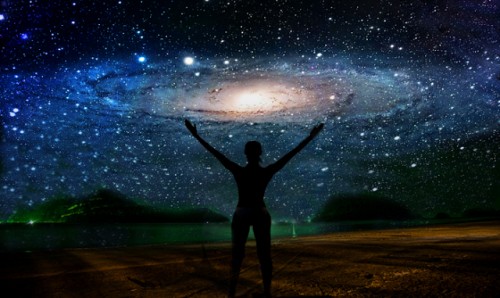 In working with the principles of manifestation, we are asked to go beyond our surface images and probe in the dark, fertile areas that underlie our assumptions.

We are asked to explore ourselves, our deeper thoughts and feelings so that we can begin to see just who we are manifesting and why.

We are asked to encounter the same forces that act on seeds and bring them into the light from nurturing the hidden places, or, on a cosmic scale, the forces that give birth to new worlds.

Five years ago, I had a conversation with the Universe.

It included France, England, somewhere warm, writing, a paid for house, a published novel, a part time job, time to support my beautiful lover at home because concussions are a bitch and time to grow more food.

I laid out my terms. I knew that I was a hard worker, but I needed it to feed my soul.

The Universe did indeed listen. Here is what I got.

1. Some time to foster infants, and by loving their vulnerable little selves, I healed my inner child who never quite got over being abandoned by my natural parents.

That was a gift.

There was still no money, but I was paid by the light in their eyes.

2. A year to offer my adoptive mother at-home care with us until she passed away.

She held all the babies.

She loved. She cried. She knew that I would not turn her away, even though we had that dark past and I struggled to say nice words some days.

When she passed away, I paid off our house. I went to Kauai for a month, with daughters in tow.

3. I took six months to write my novel.

It was work. I loved it!

A bit more work, and something I love will be released into the world, and may it feed someone’s soul.

I still believe in my dreams.

4. I found a compromise between working out and working in, home is still my most important place of contribution.

I no longer feel guilty. This is what I am here to do.

5. My love has found real help for his concussions (but that is another post) and I continue to be his support system.

This is what I am here to do. I no longer feel guilty.

6. My daughters are launched into the world.

They are lovely, bohemian creatures who have traveled the globe and find solace in the woods, by the ocean, in the mountains.

I no longer feel guilty for staying home.

I have had a rarely gifted life. I have earned all of it.

I am woman. Hear me roar.

Looking Inside of Myself Instead of Down My Nose.