Reinvent St. Valentine’s Day with an Infusion of Goddess Energy. 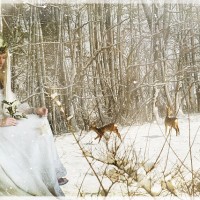 I received my first Valentine’s Day card in fifth grade.

I still don’t know who it was from but I do know that I received one and the popular girl got 20. That soured me right away on love at such an unreasonable age.

My mother said that it didn’t mean anything, that one love was better than 20. Right. Obviously she did not know anything about classroom dynamics.

High School was no better. I attended an all-girls school run by nuns. So, no boys (although by this point I had discovered girls and one from them would have been delightful) and the nuns, earnest as they were during sex ed class, had no clue about affairs of the heart, otherwise why would they be all married to one man?

In any case, I began to read Shakespeare and that really messed with my head.

Love was clearly something that got one into heaps of trouble.

This is also where the story of St. Valentine was dispensed. Now, not the whole story, just the bits about how he made way for lovers to be united, everyone lived happily ever after and we could all aspire to such a union, because that, after all, was our only mission in life.

As it turns out, I am quite fond of being married and love has been good to me.

But just for the fun of it, I looked up some of St. Valentine’s history and it appears that there were a lot of shenanigans surrounding his mission to bring lovers together.

Being a witchy sort of girl, I’ve added something a little paganish for you to ponder as well. Love takes many forms after all.

Around the time of 269AD, polygamy was not a bad word. Actually, it was fashionable to have more than one wife.

Now, I am not speaking of modern day polygamy, where women also have the choice to have more than one male partner, or female or whatever makes their heart go pitter-patter. I mean, back then, men collected women, kind of like we now collect a great deal of possessions.

Claudius, an odious emperor, was all for the polygamy. He was not so much for the Roman church.

In fact he liked to martyr priests via torture. You’d think an emperor would have so much to do that he wouldn’t have time to torture innocent priests, but then, everyone needs some form of entertainment.

Valentine, who was not a saint as yet—one had to die first back then—truly had a heart for God and believed in the sacred union of one man and one woman. He actually performed Christian marriages in secret. This was a bad thing because Claudius had never heard of equal rights, religious freedoms or just plain old being nice to other human beings.

Priests, interested in eternal love and monogamy were not on his list of things to not mess with.

Back to Valentine. He was in love with love. Proper love. Not hippie love, like we had in the sixties. Just strictly Romeo and Juliet kind of stuff where—well, I can’t write about it because it’s not that romantic when one martyr’s themselves for love.

I mean that in the every possible way that we still sacrifice ourselves for our lovers. Emotionally, physically, spiritually.

So, Valentine performed the marriages and his flock were honoring their beliefs by following their hearts.

But odious Claudius had to spoil everything by torturing—I’ll spare you the details, but you can google it—and killing the man we now associate with an extremely commercialized version of what love really is. Taking what positive I could from this tale, I’m convinced that Valentine showed us the merits of standing in one’s convictions. He had courage, a key ingredient for life lived on the edge.

So what has this thing got to do with the Goddess Brigid?

St. Valentine’s Day falls near the time of Imbolc, the first festival of spring and awakening in the Celtic Wheel of the Year.

This is a time when the Goddess is awakening to the powerful forces of birth. The union of the God and Goddess will soon be evident. All of nature quickens and responds to that great love affair. The Fire Goddess Brigid brings forth energies that transform the earth and us while we nurture new visions.

Brigid, the Triple Goddess of light, knowledge and inspiration was a unifying force for the Celts of Europe and owned an apple orchard in the Otherworld. Apples are an ancient symbol of love and the Goddess. Combining these two festivals can bring new meaning to this time of year when many are left feeling empty because no expression of love has reached them.

Here are a few things we can do during Imbolc and on St. Valentine’s Day that speak of true love—for each other and for the planet.

Do it alone, in a circle of friends, or with your Valentine:

1. Drop some food to the homeless, or prepare a meal for someone who needs it. Food is a language of love.

2. Volunteer at the women’s shelter, bring clothes, or support items for mothers with young children. Nothing says love like supporting those who cannot support themselves at the time. We’ve all needed a helping hand.

3. Meditate. Visualize love emanating from your heart center, sending it to the world. Set up remote meditation circles, and join together in this powerful exercise. There is power in Unified Love.

4. Love yourself. Everything good on this planet starts with self-love.

5. Start some seeds indoors for your food garden. Feed yourself, feed the world.

6. Plant a seed of love in someone’s heart. If you’re feeling it, share it. It might literally be the difference between life and death.

7. Invite your friends over for a circle dance. The spiral is a symbol of the Goddess. Share stories of love, inspiration and new beginnings.

8. Dance naked around a fire. Weather and neighbors permitting.

9. Be the change. Use the fire within you to bring passion to worthwhile causes.

10. Make love. Your body was meant for lovin’. Eat apples, pomegranates, drink red wine—you can take it from here.

Seduction Begins the Night Before. {Adult}