Riding a Bicycle Is Really Not that Cool. 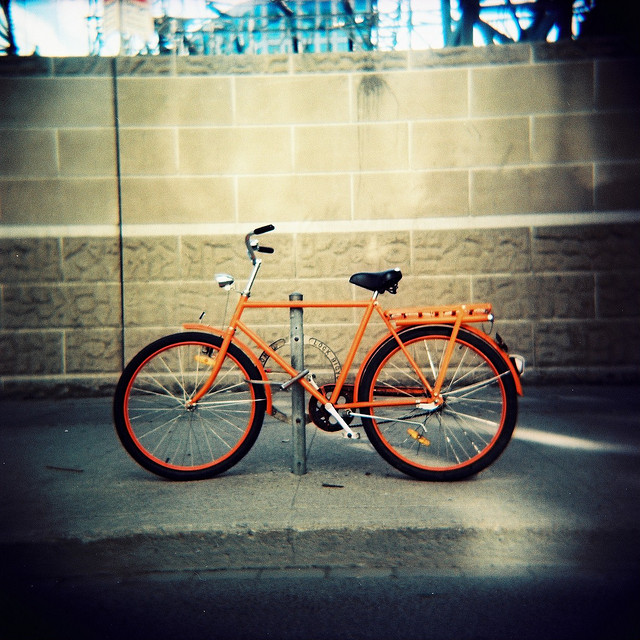 It’s funny how ordinary, daily things can be put in a totally different perspective by foreigners.

I am Dutch and grew up in The Netherlands. Riding a bicycle is like second nature to me, it’s engrained in my and my fellow countrymen’s DNA.

It’s kind of amusing to see how big a deal it is made out to be outside of Holland. I mean, Elephant Journal has a special Bike Section. There are dozens, if not hundreds, of YouTube videos about cycling in the Netherlands, including documentaries detailing how Dutch society and authorities have developed and promoted bicycle policies throughout the years.

Apparently, the rest of the world seems to think that riding a bike is a huge thing: it’s green, it’s good for your health, it’s fashionable and the Dutch are so cool doing all that…

Online there are whole lists of what to (not) do when trying to integrate riding a bike in daily life: wear layered clothes, leave 10 minutes earlier, wear padded shorts under your skirt, wear neon, helmets…sorry, wear what under my skirt? Neon? Helmets?

I think it’s time for some down-to-earth Dutch perspective.

Here is what riding a bicycle on a daily basis really means.

It means fathers and mothers trip over their own feet and nearly break their back as they try to push their offspring toward independence on their first little bicycle without side wheels. They have to hold the bike by its saddle and the toddler by its t-shirt, start pushing gently while trotting behind the shaky and swaying structure, yell at the kid to pedal and steer and at some point, they have to give a big push and pray for the best. Oh, and they have to film the whole thing with the smartphone in their spare hand. (Which spare hand?)

For the kids, it’s great. For the parents, it’s more likely to be traumatic.

It means that, once we have learnt to cycle and the road to school is safe, our parents are off the hook—but we have to ride, come rain come shine. Threatening grey skies? A pair of waterproof trousers and a rain coat on top of our normal clothes and we are good to go. Cold? Pedal harder, you’ll get warm soon. Tired? Some fresh air will do you good. Here’s your lunch box, off to school now!

It means that, once we are grown up, we will cycle to the station to catch the train to work. Or cycle to work directly. Lawyers in their Hugo Boss suits, executive directors in their Prada shoes, cello players with their instrument, we all jump on our bikes in the morning. Who has time to think about bringing a change of clothes to work? Who said it’s not possible to cycle with high heels and a short skirt? 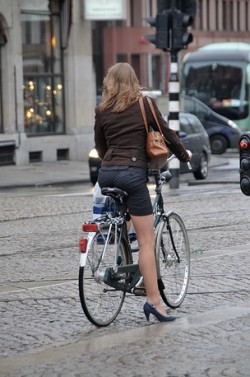 It means we have funny expressions related to bikes, such as “You’ve got to learn it on an old bicycle,” which used to mean exactly that, but nowadays refers to having sex with someone (substantially) older than you, especially an older woman. Or we say “What is this dangling on my bike?” which means as much as “What the bleep is happening??”

It means we are all able to carry a crate of 24 beer bottles on the back of our bicycle, while the rest of the groceries is hanging on our steering wheel. It also means that all Dutch learned to run, skip and jump to get onto the back of a moving bike. It’s a funny little hop and we know how to do it loaded with shopping bags, going up-hill (as in bridges, we don’t have mountains in Holland) or even when we are completely and utterly intoxicated.

Speaking of intoxicated, it means that when it’s time to go home after a long night of boozing, we need to find our bike parked in the dark among hundreds of similar looking metal wrecks, get it unlocked, untangle it from all the other bikes and then slalom our way  home (not that it’s legal to cycle under the influence of course…). It also means trying to remember with the morning after’s hangover, where we parked the bike when we got home, or whichever place it is we slept.

It means that we all, at some point in our lives, fell off our bike in the most ungraceful way. I remember an instance when I was around eight-years-old and tried to cycle without holding my steering wheel. Or the time at 4.00 a.m. when I was a 19-year-old student, absolutely plastered and could have sworn that those tram rails moved as I was crossing over them. Or that freezing day when I was a 25-year-old banker on my way to work and I wanted to go left but my bike decided to keep going straight. We have all been there, right down there, on the tarmac, praying nobody else saw what happened. And we all got up and got riding again. Helmets? Hahahahaha….

It means that we have all had a wet saddle print on our ass at one time or another, on a rainy day, especially when the saddle had a tear previously gone unnoticed. Nothing a plastic bag can’t solve, unless the dye of the plastic bag leaves an imprint on the new white trousers we chose to wear that day.

It means that we do weekend bicycle trips of 100 km a day or longer on our normal cheap city bike. No 15 gears, no special accessories, no weird clothes… We just jump on the bike and start pedaling. We even hang a buggy behind the bike and stuff it with kids, dogs or luggage. Or all three. 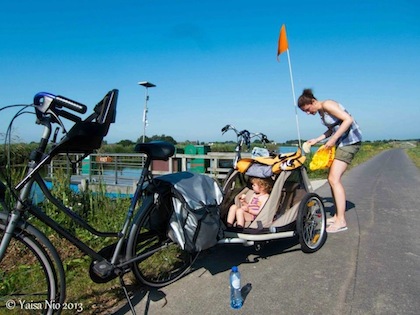 It means that an expensive bike is really not necessary. The majority of the Dutch, especially university students, will at some point in their lives have bought a stolen bike from a junkie. The uglier and more rickety the bike is, the better. Less chance to get it stolen, you see?

Similarly, it is essential to then invest in a serious chain lock, at least three times more expensive than the bike, because obviously, we cannot expect the junkie to steel a bike and then sell it with a working lock.

Not feeling good about buying stolen property? No worries, online—does that imply not stolen?—second hand bikes start from under EUR 50. Bottom line, the Dutch do not invest much in their two-wheelers, unless….

…they have three children and groceries to carry around on a daily basis.

In that case, a stronger model, with let’s say three gears and hand brakes, may be a good idea. This scenario also requires some acrobatics, strong thigh muscles and multitasking skills as it means keeping the groceries bag on the steering wheel, getting to that traffic light before it jumps to red and making sure kid one stops pulling the hairs of kid two while telling kid three on the back to stop wiggling around, all at the same time. But all regular moms and dads in Holland do it, so it can’t be that hard.

So that’s what it means to ride a bike on a daily basis. It’s really no big deal for us Dutchies.

But okay, we are kinda cool.