The Doors that Appear when we Follow our Bliss. 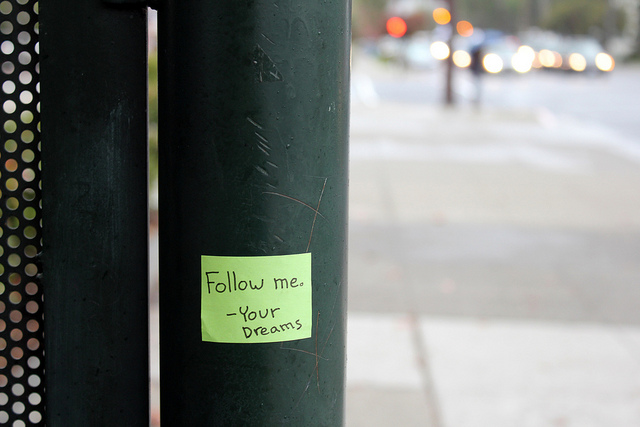 A year ago, I felt lost.

A medical student who didn’t want to work as a doctor, I was miserable in medical school and felt trapped with no time to pursue my creative passions. At times, I’d wake up in the morning panicked, wondering, “what am I doing with my life?”

I was sure I’d stepped irreparably off my path, and lost my chance at a life I might actually enjoy.

I thought I’d missed the boat.

More than anything else I wanted to find my purpose. As a teenager, I’d found that through a professional acting career. I had a chance to perform in community theater and then on such television shows as 7th Heaven, Boston Public, and The Practice. It was a childhood dream come true.

Now, I didn’t want to be an actress—and I no longer knew what I wanted to do.

Around that time, my roommate invited me to the launch party for the Institute for Compassionate Leadership. I had no idea what this organization was, but I was excited to spend some time with friends in a festive setting. Little did I know this decision would set off a domino effect.

A year later, I have to pinch myself as I look at what’s changed. I am now a doctor (yes, I graduated!) working as a health and wellness journalist at ABC National News. As part of my job, I get to pitch stories on topics that fascinate me, write scripts that air on national television, hang out backstage at The View with Whoopi Goldberg, and join World News anchor David Muir on ABC’s rooftop for an interview with Bill Gates.

Perhaps most importantly, I get a chance to teach daily meditation to my ABC colleagues—something that has been indispensable in my own life. Several have asked me to collaborate on mindfulness-themed stories for national television. And I’ve been invited to lecture at schools and hospitals internationally on “meditation medicine.”

It’s all a dream that I thought would never come true…and it didn’t happen by magic. (Okay, maybe a little bit of magic). With guidance from mentors, I learned and took specific, replicable steps that catalyzed these changes.

There are a few lessons I’ve learned along the way, especially from my participation in the Institute for Compassionate Leadership (ICL), a program that helps young people who want to change the world from the inside out “do something awesome” with their lives.

Here are some of the most crucial lessons:

One of the key components of the Institute was practicing mindfulness meditation. I’d been meditating for years (and found this practice indispensable during medical school) but, through ICL, I began to extend mindfulness even more into my daily life.

I became aware of my emotions. I developed an ability to notice and heed the wisdom of my body. Ultimately, as I became more mindful, I grew more clear about what felt aligned and what felt out of tune and I could no longer ignore these messages. For example, I noticed that when people asked me about applying to residency, I could feel my whole body tense up with resistance.

At the Institute for Compassionate Leadership, we engaged in exercises about how to speak and behave authentically in each and every interaction. This can take different forms: speaking our truth when it’s unpopular, standing up for someone who’s persecuted, saying something difficult to a loved one, asking for a raise.

As I started to put this theory into practice, I noticed that a few things happened right away: I started to ask for what I wanted and doors I couldn’t have imagined opened (including the job at ABC).

Second, I began to meet people who felt like soul brothers and sisters (and people who were less aligned with my true self naturally fell away). Third, as I started to speak with vulnerability, I started to free myself from the bonds of fear and shame that once limited my life.

In medical school, I was mostly surrounded by (not-surprisingly) people who wanted to become doctors. Many of them enjoyed spending their free time speaking about medicine—our microbiology exam, a conversation with an attending physician or the rash they saw in the ER. I, on the other hand, had little interest in these topics.

At the Institute, and as I started to spend more time doing the activities I most enjoy, I started to meet more young people who were committed to following their passion, living their purpose, and doing work they love. These people became my community, my tribe.

Jim Rohn famously said we become the average of the five people we spend the most time with, and I can now see why that might be true. My new tribe helped me trust myself when I felt that residency wasn’t the right choice at this point in my life. Their support and camaraderie lent me the confidence to take the leap to inquire about and accept this job at ABC News. As we spent more time together, I was inspired by their courage to step up to the plate and start living my own calling.

The word decide shares the Latin root ceder (to cut) herbicide or pesticide. As we decide, we literally cut ourselves off from other options. This can be terrifying, but it’s also invigorating: as we close the door to what we don’t want, we increase the likelihood of moving toward our true calling. And, when we do this, we often step into a state of flow.

Joseph Campbell said “follow your bliss and the Universe will open doors where there were only walls.” My decision to forgo residency was a clear step toward following my bliss. As I did this, doors beyond my imagination opened: I was invited to do a rotation at ABC News. When I spoke to my ABC boss about potential job opportunities, he said he’d been waiting for approval for a position for two years and that approval finally came through earlier that week.

Within a matter of minutes, a new path had appeared.

Goethe said, “the moment one definitely commits oneself, then Providence moves too. All sorts of things happen that would never otherwise have occurred. A whole stream of events issues from the decision, raising in one’s favor all manner of unforeseen incidents and meetings and material assistance, which no man could have dreamed would have come his way.”

In my experience, a calling isn’t a final destination, but rather a flow we enter when we are aligned with our passion and purpose. As we take steps guided by inner wisdom, with the support of a likeminded tribe, “coincidences” or synchronicities begin to appear.

Trust these. They are the whisper or confirmation that you are on the right path.

And, whatever you have in your mind or heart, begin. Take one step today. Goethe finished the previous stanza with these famous words: “Whatever you can do, or dream you can do, begin it.  Boldness has genius, power, and magic in it. Begin it now.”

5 Ways to Find Your True Calling.