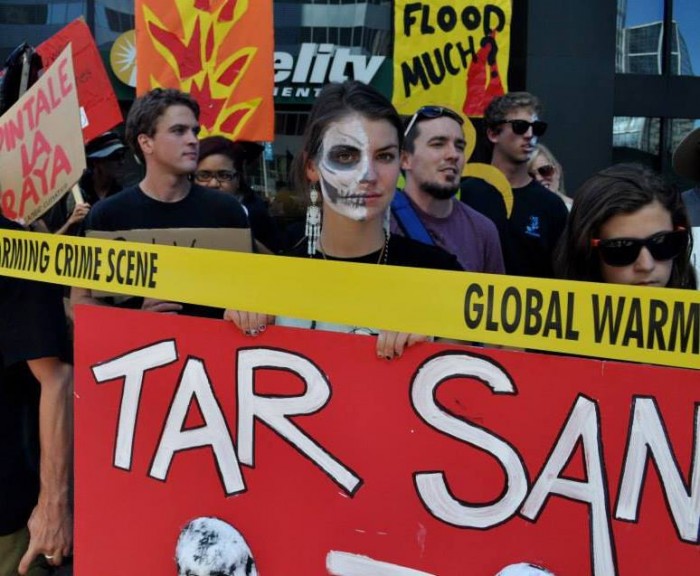 Responses to climate change that continue to put the entire burden on individual consumers are not enough.

The same logic that ends up working global laborers to the bone for pennies will also burn mountains of coal, oil and gas while spending next to nothing on pollution controls.

Imagine instead that those subsidies and tax breaks are transferred to solar, wind, tidal and geothermal forms of energy!

We have lost so much time to political stalling and weak climate policies, all the while allowing our emissions to balloon, that we are now facing the drastic reality of needing to cut the expansionist logic at the heart of our capitalistic system.

Scientific reality is begging us to get real, which means wealthy countries like the US, Canada and the EU must cut greenhouse gas emissions by eight percent each year—starting now.

The problem is that we have an economic system that regards GDP growth above all else, regardless of human or ecological consequences.

This system fails to place value on things that are most dear to us, like a decent standard of living for families, clean air and water, and protection of precious wilderness and the natural wildlife in perpetuity.

The current scientific truths do present a challenge. But isn’t it better to change the growth-based, profit-seeking logic of capitalism than allow the disastrous effects of climate change to wreak havoc on our planet?

What is needed is what some brilliant and innovative thinkers like Paul Raskin call “The Great Transition.”

Deep emission cutbacks in wealthy nations must start immediately. We must also consume less and use less energy. We need to provide incentives for consuming local and seasonal food and for more efficient and affordable public transit, like a clean, light rail accessible to all. We need affordable, energy-efficient housing along those transit lines and in pedestrian-friendly areas.

Thus cities need to be planned for high-density living (complete with bike lanes in which riders aren’t asked to risk their lives to get around town). We need management that discourages urban sprawl and encourages local agriculture (urban gardens, community gardens, and roof top gardens). And we need laws that require manufacturers to recycled metals like copper, and to be responsible for the electronic waste they produce.

Such policies have benefits that are far more reaching than just lowering emissions. They encourage civic space, physical activity, community building on top of ensuring cleaner air and water.

The policies would reduce inequality, since low-income people benefit from improvements in public housing and public transit. A strong living wage would be supported by the expanded services, which would no longer be dependent on jobs in dirty industries: a huge number of jobs would be created in this green transition—jobs in mass transit, renewable energy, weatherization, and ecosystem restoration.

Goods would once again be made to last, and the use of energy-intensive, long-haul transport would be reserved for those places where goods cannot be produced locally.

Such a shift requires visionary, long-term planning and tough regulation of business. It will also require higher levels of taxation for the affluent, and big public sector expenditure.

But think of the benefit: in the words of Naomi Klein, we need to change “everything about how we think about the economy, so that our pollution doesn’t change everything about our physical world.”