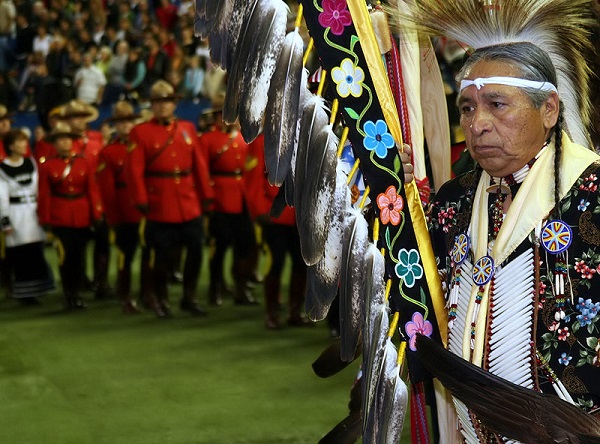 Yet 60 years ago these people could not vote—even though many served in both World Wars. And for decades their children were sent to residential schools along with Metis, Inuit, and Innu children, suffering great abuse.

More than 10,000 Aboriginal children were then again taken from their families, their culture, divorced from their language when those schools were closed during the “Sixties Scoop,” to be placed in non-Aboriginal white homes across the country.

To this day Metis, Inuit, and Innu still seek apology and damages for the sexual and physical abuse they too suffered at the Residential Schools, as for no reason they were excluded from the overdue apology and compensation finally extended to First Nations in 2008.

Treated like second-class citizens or worse for so long, it is no wonder that many First Nations are poor—with three families living in a house without heat or clean water on a reserve that still lacks a school. Often children sleep shoulder to shoulder on the floor.

Thousands of residents on native reserves live without sewage or running water.

The most basic needs are needed: Government issued slop pails need to be replaced with modern indoor plumbing on four of Canada’s poorest reserves, but the Conservative Government budgeted only a fraction of what is needed, and no new money to install even rudimentary indoor plumbing has been budgeted since 2011.

The province of Manitoba is where the poorest First Nations live: there, 62 percent of First Nations children live below the poverty line and tend to drop out of school, 80 percent of the adults are unemployed and on welfare, diabetes is chronic, housing mold common, and the mortality rate is high.

The federal government reports these statistics, yet does little about them, but the First Nation population throughout Canada is the fastest growing segment! The high cost of welfare and social assistance in provinces like Manitoba should motivate even the Conservative Harper government to act for economic reasons if not for compassionate ones!

The truth is, where unemployment stays high, options stay bleak.

Health care and education that appreciates native cultures are needed along with economic opportunities that do not jeopardize the native rights to engage in traditional ways of life. Even with economic pressure on First Nations to make quick-and-dirty deals with extractive industries, they resist because they value their natural environment more than money. It is the land and waters, even in the frigid North, that allow these peoples to hunt and fish in sustainable, traditional ways.

In fact, 80 percent of BC residents oppose the Northern Gateway pipeline and its oil tankers.

Most reserves in Canada are on highly coveted, resource-rich land. But natives know from experience that selling out to the fossil fuel industry has always meant sacrifice and exploitation. The promise of jobs in the mines gave them black lungs and poisoned waterways. Fossil fuels destroy life from the land from which they are extracted to the oceans and atmosphere that absorb the waste.

Natives value Mother Earth and Father Sky, the sun, forests, and clear waters. They prefer to live in close relationship with the natural world, paying attention to when the sun rises, the wind blows, and when the rivers or tides are strong.

Because of treaty rights, the government cannot just usurp native land, as in former times, this time for pipelines—not even in exchange for a pay off. Yet Prime Minister Harper, even after the crash in oil prices, still worships dirty Alberta crude as the cornerstone of his government, just at a time when it would make more sense to invest in solar, wind, and tidal power.

This is where the current Canadian environmental movement comes in. Since the Fisheries and Environmental Acts have been gutted by the Harper government, Indigenous treaty rights are the last line of defense of land and water.

Environmentalists know that the power of the sun, wind, and waves can be harnessed, but unlike fossil fuels, these forces can never be fully possessed. Solar and wind can make money, but by nature of their decentralization, they will never create the concentrated super-profits to which the fossil fuel corporations have become accustomed. Once the initial investment has been made in renewable energy infrastructure, providing three times the employment of pipelines, nature gives the energy for free. New pipelines are unnecessary.

Thus moving to renewables represents more than a shift in power sources; it represents a fundamental shift in the relation of humanity and the natural world on which we all depend—a relationship in harmony with the way indigenous people see the world.

As the First Nations say, all forms of life and the environment are “all my relations.”

The Political Power of Native Treaties to Stop Environmental Degradation.