The Most Dangerous Ally: How Israel Makes us Fight. 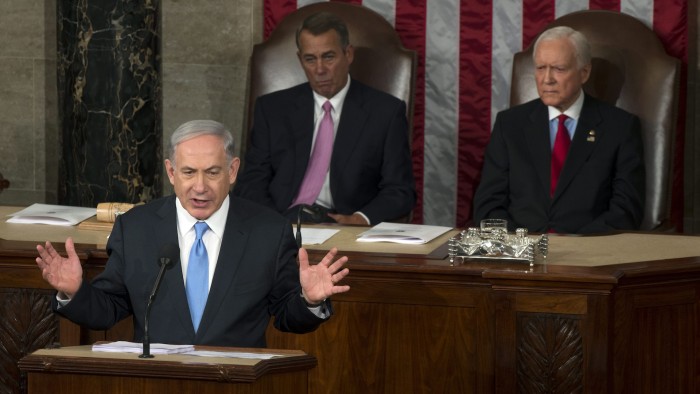 Karl Marx once noted that history always repeats itself, the first time as tragedy the second as farce.

As Israel’s Prime Minister, Benjamin Netanyahu, once more inserts himself into a major American foreign policy debate, it seems that history is repeating itself once more. But the most farcical element of the story this time involves a failure to remember.

This is not the first time Netanyahu has come before Congress in an effort to get America to fight Israel’s wars. The last time Netanyahu lied to Congress so as to put America on a warpath with a major Middle Eastern power was in 2002. “There is no question whatsoever that Saddam is seeking,” noted Netanyahu with smug self-confidence, “and is advancing toward the development of nuclear weapons—no question whatsoever.” [1]

The lie mattered because American intelligence agencies take Israeli intelligence very seriously. But while Bush administration officials have paid a price in diminished esteem for their less confident assertions, Netanyahu appears to have come away unscathed, and this almost certainly has something to do with the Israel lobby.

Perhaps the only way to approach the power of the American Israel lobby is through humor. Consider the Obama administration’s response to his speech before Congress. The leader of a foreign power is actively working to undermine a major foreign policy initiative of a two-term American President, and what does the Obama administration do but confirm its commitment to its meddling junior partner. It reminds me of a joke: what do you call an American politician who substantially criticizes Israel? Ready for retirement. Members of Congress criticized Netanyahu after the speech more strongly than an Israeli leader has probably been criticized in generations. But it is noteworthy what they left out.

If power can be measured by the ability to get others to say and do what you want, then the Israel lobby must be considered stunningly formidable. The lawyer and defender of Israel, Alan Dershowitz, wrote in his memoir that the American Israel Public Affairs Committee, which is but one of many organizations making up the Israel lobby, “is perhaps the most effective lobbying and fundraising effort in the history of democracy.” [2] Of course, one might wonder if this sort of strength is even compatible with democracy. But bragging aside, Fortune ranked them the second most powerful lobby in the country. [3]

Along with several other groups, they have made speaking out against the actions of Israel virtual political suicide. This is worrisome not only because American interests and those of Israel often diverge, but because the Israel lobby has come increasingly to represent the Israeli right and to push America into an aggressive stance toward Muslim countries. It is perhaps for this reason that a 2003 Pew Poll found even 47 percent of Israelis believe U.S. foreign policy favors Israel too much. [4]

And it is not as if Israel has been a loyal ally. According to the General Accounting Office, Israeli espionage against the U.S. is worse than that of any other ally. Their espionage is not only defensive but also involves stealing economic secrets, which give an advantage to Israeli over American firms. [5] Much of the espionage has occurred at the highest levels of government as well. The Bush administration’s Deputy Secretary of Defense, Paul Wolfowitz, and Undersecretary of Defense Policy, Douglas Feith, may have been the two officials most responsible for America’s 2003 Iraq War. And they were both investigated at one point in their careers for passing state secrets to Israel. [6] The Iraq War was brought to the American people by neoconservative pundits and officials, who gave unwavering support to Israel and often came to power through Israel lobby organizations. [7]

Israel has actually been quite aggressive with its bigger American ally on numerous occasions as well. After the American military analyst, Jonathon Pollard, was caught giving large quantities of highly classified information to Israel between 1981 and 1985, the Israelis refused to tell the U.S. what exactly he had provided. [8] According to John Mearsheimer and Stephen Walt, two of the world’s most respected international relations theorists from Harvard and the University of Chicago, in their devastating analysis, The Israel Lobby and U.S. Foreign Policy, Israel sold military equipment to Iran during the American hostage crisis in 1978-79 and U.S. based missile systems to China in 2001. [9]

In the 1954 Lavon Affair, Israeli agents attempted to bomb several U.S. government offices in Cairo so as to sow discord between the U.S. and Egypt. [10] And in 1967, Israeli fighter jets shot up the American, U.S.S. Liberty ship, which was clearly marked as American, killing 34 crewmen and wounding 171 others. Crewmen say Israeli jets had been flying so close to the ship all morning that their propellers were rattling the deck, and later investigations of the attack were regarded by the Liberty Veteran’s Association as shallow. Meanwhile, the Secretary of State at the time, Dean Rusk, was “never satisfied with the Israeli explanation,” and considered the attack “outrageous.” [11]

While conspiracies like this can be a rabbit hole, the salient point here is the abundance of evidence against Israel and the unwillingness of officials to take it seriously. Moreover, the attack simply follows a pattern of Israeli aggression that has been on full display in recent weeks. Israeli and American interests regularly diverge and to keep that split from becoming too great, America’s most powerful foreign policy lobby actively works to shape American foreign policy to its own interests. Doing this requires that they exact a heavy price on American politicians speaking out against the actions of the state they represent. And this requires adopting a cynical attitude toward the American people and political system.

But when people are prevented from speaking their consciences, and the reasons for speaking out accumulate, a moment will usually come when the dam just bursts. It is no different for common people and elites. A moment will come when that which has been suppressed rises to the surface, especially when there is so little holding it back. The Israel lobby has worked to suppress vitally important moral and strategic political speech for generations and appears to be losing its grip. If the Netanyahu speech was just an opening act, the fire next time may prove neither tragic nor farcical but a complete inferno.

The Mouse That Swallowed the Elephant: How Israel Governs America.

1.  Netanyahu was wrong about Iraq having nuclear weapons

3. A GROUNDBREAKING FORTUNE SURVEY REVEALS WHO BELONGS TO LOBBYING’S ELITE AND WHY THEY WIELD SO MUCH CLOUT.