The Truth About Luck & How to Make it Work for Us. 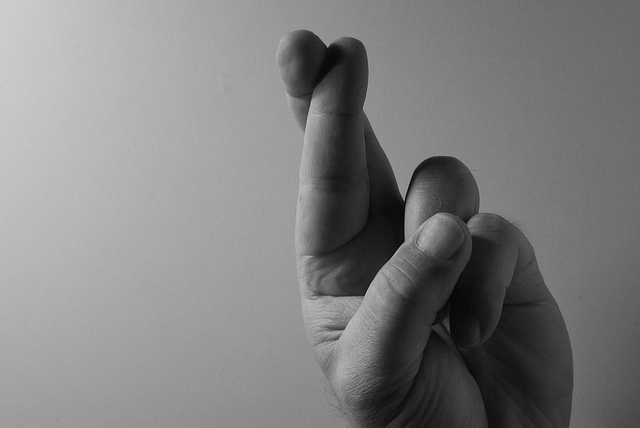 I watched an interview by Oprah with Starbucks CEO Howard Schultz and was delighted to discover that the three of us share something in common: we do not believe in luck.

Howard specifically said “luck is the residue of design.” To which Oprah replied that luck is something that happens when you are “prepared for that moment when something shows itself.”

I could not agree more.

I would call “Luck” by a different name—maybe “Fate” or “God”? A mystical intervention that allows us to meet the right person or be in the right place at the right time.

Of course, if you have not put in the ten thousand hours honing your craft—the requirement for success according to Malcolm Gladwell in his book Outliers—that meeting will be a waste of time.

It has long irritated me if, when heading into a test or an interview, someone has said to me, “Good luck.” If I am feeling particularly irritable that day I might mutter under my breath, “I don’t need luck.” If you wish me good luck I jump to the following conclusions about what you believe about me:

I am incapable of pulling off this feat through my own skill or intelligence;

I have not worked my butt off to create the very situation I am about to walk into;

I have not prepared with great thought and care as to how I will conduct myself in the situation;

I have not done the homework or studying I need to succeed in my test or interview.

Luck delegates responsibility for our own lives onto, well, something else—whatever that force is. Luck is simply a pre-negotiated scapegoat in case we fail at our endeavour. Using the work luck would be akin to saying we will “try.”

The flip side to that coin is that if we believe in luck, we are also prohibited from truly enjoying the fruits of our labour. Luck negates our staring role in our own successes. How could we celebrate our successes if we think luck is what got us there?

I do not know about you, but after I have invested huge amounts of time and energy into memorizing dozens of paragraphs of law, for example, there is no way I am giving luck the credit for passing that test.

Not happening on my watch. I will take responsibility for both my successes and my failures.

When I was bemoaning my lack of success about an endeavour to a friend recently, she reminded me there is no such thing as an overnight success. Those bands, authors, and writers we love and respect—who seem to have come out of nowhere—have been plying their trade in oblivion for years.

Elizabeth Gilbert wrote and received daily rejection letters for six years before being published. Howard Schultz was rejected more than 200 times when trying to raise the capital for his Italian style coffee-shop business that would become Starbucks. Brene Brown toiled in academic research for 12 years before a TED talk tipped her over to fame in her field.

The greats do not give up and they do not rely on luck for their eventual success. Instead, they “dream and persevere”—which I tattooed onto my ankle about 15 years ago, after accomplishing a dream I had been fighting for the seven years prior.

I highly doubt anyone who has risen to great heights of success would attribute their success to luck. Billionaire Howard Schultz does not. And neither did Benjamin Franklin, who said, “Diligence is the mother of good luck.”

The term “Fortune favours the bold” is a Latin translation that literally means fortune helps those daring. The belief is the Roman Goddess of Luck, Fortuna, is more likely to help those who take risk or action. No surprise then that this motto is also associated with Caesar when he marched on Rome and countless military regiments around the world also use this as their motto.

Did any of the great calls to action in history rely on luck?

Martin Luther King Jr. does not reference luck in his “I have a dream” speech. Instead, he says: “Continue to work with the faith that unearned suffering is redemptive.” The dreams Martin Luther King described were of rising up, sitting together, joining hands, ceasing judgement and transforming.

In Winston Churchill’s 1940 “Be Ye Men of Valour” speech—his first given as Prime Minister of Britain during World War II—there is no single reference to luck. There is reference to “dogged endurance,” “invincible confidence” and never surrendering ourselves “to servitude and shame, whatever the cost and agony may be.”

Can you imagine how the American people would have reacted after the tragedy of 9/11 if President Bush had said, “Well, I hope we get lucky finding the assholes who did this?” He did not say that, but promised specific action, which reportedly increased his approval rating to 90% after the terrorist attacks.

Luck is something reserved for a game of chance in Macau, or winning the Powerball lottery. Luck is a non-sensical blessing that comes out of nowhere, has nothing to do with our personality traits or talents and bestows upon us something incredibly out-of-this-world magical.

In other words, getting a job interview, or writing a test, does not meet the criteria in which luck plays a role. Luck should play no role in our life’s planning or work—outside of that Las Vegas weekend.

I leave you with some famous men’s thoughts on luck:

“Whatever luck I had, I made. I was never a natural athlete, but I paid my dues in sweat and concentration and took the time necessary to learn karate and become world champion.” ~ Chuck Norris

“People often remark that I’m pretty lucky. Luck is only important in so far as getting the chance to sell yourself at the right moment. After that, you’ve got to have talent and know how to use it.” ~ Frank Sinatra

“The meeting of preparation with opportunity generates the offspring we call luck.” ~ Tony Robbins

“When it comes to luck, you make your own.” ~ Bruce Springsteen

“Some people, through luck and skill, end up with a lot of assets. If you’re good at kicking a ball, writing software, investing in stocks, it pays extremely well.” ~ Bill Gates

Does Good Luck Exist? (The Art of Neutrality)