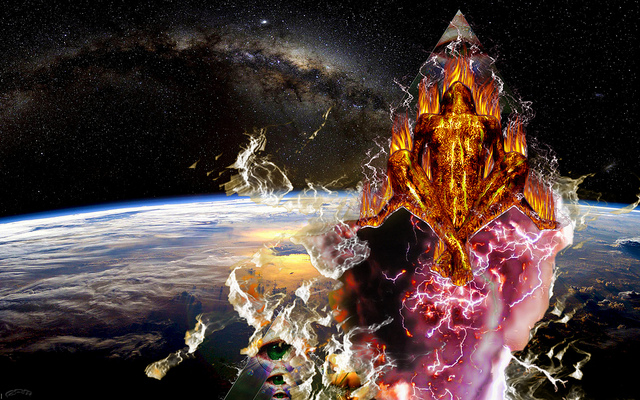 The condemnation of spiritual practices is rampant among those who herald modern rationalism as their savior. However, many of their standard rejections don’t apply to the actual beliefs of most spiritual people.

Sometimes the principles of spiritually-conscious individuals are referred to as “woo-woo.” This is misguided. And while some of these beliefs lack scientific or rational basis, this could also be applied to the rhetoric that manifests from the metaphysical views that are disguised as orthodox “science.”

One example is materialism, or the belief that everything in the universe is fundamentally made up of or can be reduced to lifeless matter. Ironically, this is a metaphysical position because it attempts to explain the essential nature of reality. However, this view has not in any way been proven and doesn’t account for life at all. In fact, there is strong evidence that implies that the universe is fundamentally non-material, interconnected and even potentially “alive,” as represented by the quantum sciences.

So in contrast, those who truly look objectively and critically at the evidence, whether they consider themselves spiritual or not, consider the dogmatic narrative of mainstream science as woo-woo, too.

In any case, three modern misconceptions of spirituality need to be addressed so that true critically-thinking minds are not misled when investigating their own relationship and connection to spiritual ideas and concepts.

Misconception #1: The Belief in a Personal Conception of God

In fact, even true religious fundamentals don’t imply this absurdity.

Therefore, spirituality does not advocate this misconstrued conception of God. In spiritual mindsets, God is simply a term that can be used interchangeably with consciousness, existence, reality and nature. It describes all-that-is, the source of everything.

It may be naturally self-creating, as illustrated through sacred geometry, and in-and-of-itself consciousness, however that doesn’t intrinsically infer that it’s self-aware. God is purely the interconnecting factor between all things and self-awareness is what manifests in complex creatures such as humans.

In addition, whatever we personally prefer to call the interconnecting fabric of reality—God, source, consciousness or quantum probability field—isn’t really important. We just need to acknowledge its all-encompassing nature, and that God is not outside of us, it is us.

The truth is, whoever decides to embrace the quantum principles of entanglement and non-locality can also believe in the spiritual concept of God. This might just be the right catalyst to open a closed mind to their inherent spiritual nature.

Misconception #2: The Rejection of Science

In general, spiritually-inclined people do not reject science, unlike many scientifically-inclined people, who reject spirituality. The former actually embrace science, at least in its true form; they view science and spirit as two sides of the same coin. The fact remains that many people, no matter their philosophical preferences, understand that the mainstream narrative of the scientific orthodoxy is delusional at best and harmful to our planet and society at worst.

Science is meant to be an objective and independent analysis of the classical and quantum worlds, however this has been shown to not occur. Corporate funding, taboos, biases and establishment pressures have all influenced the direction of careers in science and the areas that scientists feel safe and supported to study and advocate. This happens in basically every discipline and is the obvious reason why it takes so long for “accepted science” to undertake necessary paradigm shifts.

For example, the material world is not fundamentally real; quantum physics clearly illustrates that it’s an illusory manifestation of a deeper order of energy, vibration, force and information. However, old school thinkers and internet trolls continue to argue until they’re black and blue that everything is physical and unconnected. They falsely claim that they’ve debunked any alternative theories and ridicule anyone who doesn’t believe their dogmatic beliefs and hypocritical assumptions.

Regardless, many minds, both spiritual and scientific, have moved on. Eventually old school thinkers will have to as well, as it’s not sustainable to continue arrogantly believing that they’ve answered all the big questions and are now just filling out the gaps. It’s one of the biggest delusions in modern-day science.

Ultimately, most spiritual thinkers do not think that science is irrelevant, just the dogma and some of the practices of the orthodoxy, including their unscientific assumptions and their current meta-paradigm of beliefs.

Misconception #3: A Lack of Rational Thought

Just because someone believes in something more encompassing than the inert and purposeless realm of matter doesn’t mean they haven’t thought rationally about that belief. Simply, many people have had a consistent array of hyper-natural experiences happen that reflects to them that something more than the manifest world is going on.

Examples include so-called random thinking that manifests as reality; knowing true information intuitively; feeling when a loved one sustains a serious injury or passes away in unfortunate circumstances; telepathic experiences between close friends or family members, particularly twins; out-body-experiences (OBEs); near-death-experiences (NDEs); deep meditation; religious ecstasy; psychedelic expansion and having a dream or premonition before it eventuates in the future.

All this represents an interconnectedness between the internal and external realms.

Therefore, a common principle in spiritual circles is that everything is one and the same. This is illustrated by the concept of quantum non-locality. More evidence supporting a holographic model of the universe could also reinforce this truth. Yet, how can one rationalize an ongoing entanglement in their daily human life, given that our superficial experience is so seemingly separate?

Symbolism is one method. Symbolism is the “conscious” awareness of external symbols that inherently reflect interconnected information and is a rationale that many spiritual people embrace. They are consistently aware of their interrelated experiences, which demonstrate that chance is not a reasonable candidate to explain the phenomenon. The critical and rational mind has been engaged, chance has been ruled out, and the only answer left is “infinity to one,” or interconnection.

In addition, some people are okay with just feeling their spiritual nature, and there is nothing wrong with that, either. Our instinct and intuition are perfectly good tools for contributing to our understanding of reality. However, for many spiritual people, engaging the rational aspect of the ego is a complementary and necessary approach on the never-ending journey of self-empowerment and enlightenment.

Ultimately, for the record, those who condemn spirituality are not the only mindset thinking critically.