Art & Sustainable Business: An Interview with Prints On Wood. 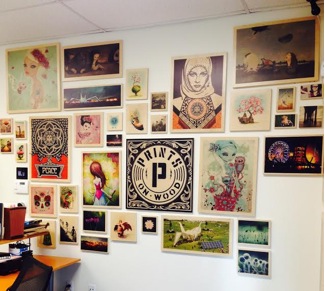 Without a doubt, art has the ability to make an impact on us.

Art is something that has been used both historically and globally to express emotions, ideas, and perspective. However, what is the impact of our art?  Long after a picture has made an impression on us, where does that picture end up?

I recently had the pleasure of meeting and interviewing Erin and Derric Swinfard, who have incorporated their passion for art and their belief in sustainable living into their large-format printing company Prints on Wood. They specialize in creating wood prints for artists and photographers of all levels.

They believe in using a sustainable system of creating art. After learning how they were started, and how they continue to evolve using mindful business habits, I now feel that art doesn’t have to just mean only creating something, it can actually represent a way of life.

Erin and Derric Swinfard believe in living and working sustainably.  They believe it’s important, not only to minimize their carbon footprint, but ultimately they want to set an example for their son.

How did Prints on Wood get started?

E: It was almost a mistake.  Derric thought, “Hey, let’s try printing something on wood” and it ignited something.

D: We used to do an art show/fundraiser for the Sea Shepherds and that’s how the art and the printing came about. We did some prints with Shepard Fairey; Shepard is a friend of mine and I’ve done a lot of cool projects with him over the years. We did a bunch of the Obama ‘Hope’ stuff that was circulated during [the campaign].  So I asked Shepard, “Why don’t we print some of your artwork on wood and have it in the art show?” and it went crazy.  It really all started from that art show.

E: Another moment was with Jeff Soto.  We did a print-on-wood release, where we produced the prints and he took it to his shop.  From there he packaged, shipped and handled all the customer service.  He said, “Last time I’ll ever do that!”  Then he jokingly said that we should do it for him, so it all came up very organically.

What is the difference between printing on wood vs. paper, plastic, or vinyl as far as the impact on the planet?

D:  Plastics and those types of materials will be around for thousands of years.  Eventually when they end up in a landfill someday, it’s never going to break down.  With canvas, a lot of the coating is actually PVCs, it’s not just canvas. Paper is closer to wood; at least that’s going to bio-degrade. But even with a paper print, you have to go to a framer, get the glass or the plastic, get it matted.  It actually takes a lot more resources.

How is printing on wood a sustainable model?

D:  The wood we use is birch, and it’s specifically grown and harvested for construction; the same kind you would use for a cabinet or cabinet drawer.  The growers are replenishing what they use, not just going in and decimating a forest.  Printing on other sub straights, like plastics and acrylics requires a lot of additional processing and those materials are not [typically] bio-degradable.  You receive your print from us, take it out of the package and can hang it directly on the wall; with no mounting, matting or framing.

Is the birch locally grown?

D: Unfortunately, baltic birch is from Russia, or sometimes China.  The true baltic birch is the best birch to buy for this particular process.  I don’t know that anyone is doing a domestic birch. We are actually looking into adding bamboo as well.

What type of ink are you using?

D:  It’s UV cured.  It’s similar to a UV cured screen printing ink, except it goes through a printer that has a light attached to the carriage which drives the ink out of the printer onto the surface.

Based on your eco-conscious business model, are you finding that you attract artists who share similar beliefs and want to print with you?

D:  A lot of companies.  Probably more companies than artists.  A lot of the artists we work with have come through relationships and referrals from other artists.  Once you have that credibility, it goes a long way with people.  The companies seek to align themselves with other companies doing the right thing.  We did a lot of work for a company called Sambazon, we’ve worked with Kashi, we did some work with Mama Chia and did a couple of vehicle wraps for them.  They know that if they want to do things more responsibly, it costs a little more and they’re willing to pay that.

E: For the artist, I don’t know that it’s so much that they get excited about the product; they appreciate our efforts to make things less impactful.

D: With Jeff Soto, he was one of the first people that got on board with us. He thought it was really cool what we were doing and that it could be done in a conscious way.

E: A portion of every sale is donated to Cuipo.  When we do releases with artists, they share with us.  Never, ever do artists have a problem with that.  Usually they are excited that they are a part of it. I think the attraction for companies and artists isn’t so focused on the actual printing of wood; but it’s more of the things we do outside of that.  Because, anyone can print on wood, right?  But not everyone does so as responsibly and with as little impact as possible.

D: One of the things that really drew us in was, we love art and we collect art, and you know, it’s a way to connect and be a part of something that we’re into.

Let’s go back to what Erin said about your relationship with Cuipo.

D: For every order placed on the website, $1 is donated towards protecting one square meter of Rainforest, which is through Cuipo.  The original founders of Paul Frank started Cuipo and wanted to do something they were passionate about.

In what other areas of arts/entertainment would you expect to see a growing trend towards conscious business practices?

D:  I think it’s a mindset.  We do all the printing for Coachella and they’re always looking for ways to do things a little better, because the people who run the festival care.  It comes down to people who want to make a difference.  What I have noticed though is some people we work with maybe didn’t really seem to care at first; but as you start to expose them to certain things, their mindset starts to change a bit.

Aside from producing a sustainable product, how are your operation efforts focused on sustainability?

D:  We were the first rebated solar commercial project in the city of Riverside.  We had our first 100 panels installed, and then in the last two years we put in another installment.  That took us to a 50 KW system; it’s just about enough that nearly 100% of our energy comes from the sun.  We are currently looking at hiring local [utility] vendors.  Also, all the negative space of the wood that isn’t used is donated to Habitat for Humanity; they use it for art projects, lattice for gardens, etc. 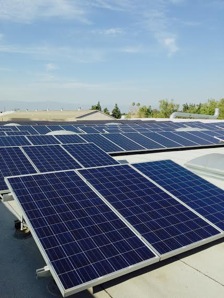 This method of printing art on wood has gained some momentum with the online community.  What sets you apart from the rest of them?

E: I think for a lot of the other companies, the environment is not their main focus; it’s not their motivation.

D: I think some of them saw an opportunity in this niche, and they jumped into it.  But I don’t know that they are passionate about doing the right thing. That’s why we believe in transparency.

Images: Provided by Prints On Wood 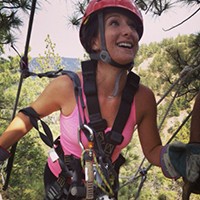