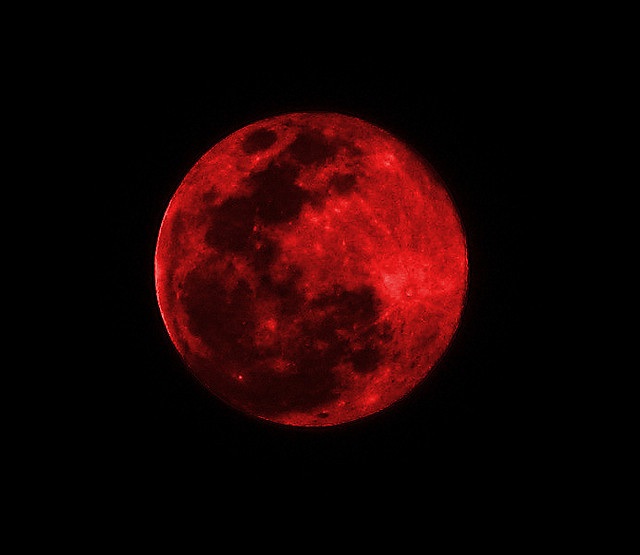 Editor’s note: Astrology isn’t a religion. We’re not sure it’s a science, either. It’s magic, maybe. But, as with feng shui, say, things affect things. So as long as we don’t go blaming our problems on the stars, as long as we assume responsibility for our own actions…well, hell, a little auspicious coincidence and applicable wisdom can’t hurt. And so, with that grain of salt…enjoy!

We have been inside the rabbit hole so to speak since the partial solar eclipse on March 21st.

Add to that the final Pluto and Uranus square back in March, and this lunar eclipse will be an accumulation of all that we have learned in the past year. Being in the midst of Eclipse season, which is a time of major shifts in consciousness and transformation when there is the potential for major endings and beginnings means we have to be ready for anything!

This total Lunar Eclipse on April 4th is the third in a series of four which started last April, all occurring in the Aries/Libra axis. This means that the major theme is all in how we relate to each other, especially our intimate relationships. This is the axis of the Divine Feminine and Divine Masculine, the ultimate ying/yang, stuff of Twin Flames (soulmates), and these eclipses will make it all too apparent where there is a lack of balance between these two principles, in every aspect of our lives.

The Sun, Mercury, Uranus and the South Node of the Moon are together in independent, assertive and courageous Aries (Masculine), while the Moon and the North Node are sitting opposite in balanced, loving and harmonious Libra (Feminine).

A Full Moon represents the time in the month when the Sun and Moon directly oppose each other and bring to the surface whatever may be out of balance in our lives. The Full Moon also tends to illuminate that which we have tried to suppress, so it is a time that we tend to follow our inner most desires. Whatever has been bubbling below the surface finally comes to a head as the Moon becomes full, bringing any underlying tension out into the open for us to face full on. We have to remember though that the moon is not rational and represents our unconscious emotional needs, so you might not be able to rationalize whatever comes up, and instead will just have to trust your heart in whatever direction it leads you in.

This eclipse on the Aries/Libra Axis also sheds light on the issues of unhealthy levels of dependency and codependency reminding us that a healthy relationship involves us having our independent lives, and knowing how to make ourselves happy and fulfilled; we all should know by now that another person is not going to be able to do it for us, as much as they may try.

This Full Moon has the ability to make us all aware of where we might be in a rut or lacking the freedom to be our true authentic selves and could potentially experience some upsets or a bit of a shake-up in the realm of our relationships; ultimately it will bring a breath of much needed fresh air into your life, and will have you feeling like a weight has been lifted. This particular Lunar Eclipse will do a great job of releasing things from our lives that no longer serve our highest selves. The bright light of the sun throws a spotlight on our intimate relationships which will illuminate any issues that have been festering there since the previous New Moon in Libra back in September 2014.

Depending on how everything has gone in the last six months, we can either see the fruit blossom from the seeds we planted back then, or the need to start over again. This has the possibility to be quite the moon! There is a great potential to bring a lot out into the open in the realm of our relationships, especially anything that may be holding us back from our soul’s desire or living an authentic life for ourselves.

As long as we keep our hearts open and are willing to look at ourselves honestly then this moon has the ability to be quite the game changer.

This Lunar Eclipse in combination with the Pluto Uranus Square will inevitably bring change. To resist the tides of change will only make it harder, because change is only necessary when we are out of alignment somehow and something is preventing us from truly blossoming. To resist change is to prevent necessary growth. There is a sense that we are completing a process which began six months ago, during the last Lunar Eclipse in October of last year. Overall, this is only an uplifting powerful moon; it will ultimately help us shed light on areas of our life where we need to change in order to continue to grow as individuals.

This moon won’t let us hide though, and it will only encourage us to have the necessary courage and insight to know exactly what our highest selves are in need of. As one of my favorite artists, Otis Redding, sings…”A change is gonna come.”