#GarissaAttacks: Tourism and Terror in Kenya. 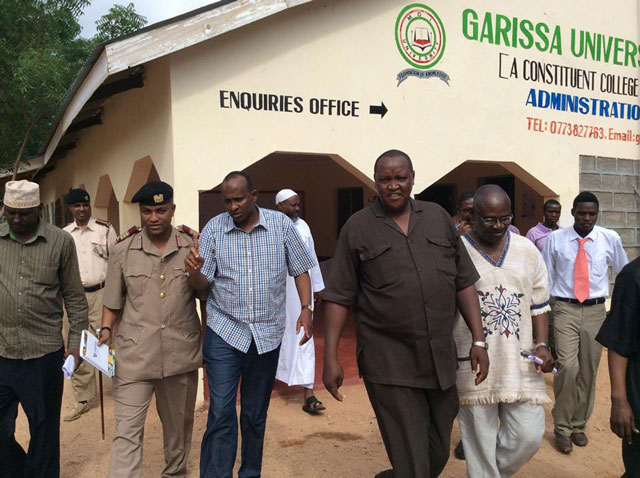 As of this morning (Friday), estimates place the death toll at 150, with more injured. Some students who escaped reported seeing evidence of beheadings as well.

Garissa’s close proximity to the Somalian border (160 km) has rendered it an easy target in the past. In this attack and others by Al Shabab (both in Kenya and in Somalia), we can recognize the signature brutality—executions, beheadings—of ISIS and Boko Haram. Some experts have suggested this might be a reaction to Al Shabab’s waning reputation and a grasping for media attention and the respect of other fundamentalist groups.

Al Shabab incursions into Kenya are, purportedly, an act of retaliation against Kenya’s sending of troops into Somalia in 2011 alongside African Union peacekeeping forces. The murder of 67 shoppers at an upscale Nairobi mall in 2013, of 28 bus passengers in 2014, and of 150 students yesterday are “punishment.” Thursday’s attacks have already been deemed the worst in Kenya since the bombing of the US Embassy in 1998.

These killings are disturbing, heartbreaking and inexcusable, but, as is usually the case, there is still a more complex story to be told.

While the news broke, I sat on a bus with three friends traveling from Lamu, north coast of Kenya, to Kilifi, another coastal town seven hours south. The road we traveled passed within 200 kilometers of Garissa.

That’s not so close, but it’s not so far either. At least four or five checkpoints slowed our progress, with all passengers descending from the bus and presenting identification to police officers guarding the road. For several hours of the journey a heavily armed police escort traveled with us.

As we followed the story on Twitter—15 dead and 65 injured the only information available for most of the day; the attackers still inside one of the dormitories; only 300 of 800 students accounted for—the danger felt both deeply real and remotely surreal.

Along our route, life stepped around the checkpoints and went on. Women carried grilled corn and sugary candies in baskets on their heads, selling snacks to weary travelers through open windows. Passengers chatted calmly over seatbacks as the bus bounced and rocked over uneven, dusty roads—some women wore veils or head scarves (the coast of Kenya being predominantly Muslim), others did not.

The attack on Garissa, it is crucial to note, is not merely an act of terror. It is part of a systematic problem in Kenya’s security measures, Western nations’ response to unrest abroad and, of course, extremist tactics of retaliation and attention-seeking brutality.

Despite warnings of impending attacks and at least some knowledge of Al Shabab’s plans (months in the making), only two security guards protected the university. These were quickly shot and killed. Police report responding swiftly, arriving on the scene soon after, yet as of Thursday night when I went to sleep, death tolls were unknown and attackers still held control of one building.

In the evening, as our bus neared Kilifi, president Uhuru Kenyatta’s voice came through the speakers, announcing that 10,000 new police recruits would be called in immediately for fast-tracked training in order to increase security in Kenya’s northern regions. Many have questioned Kenyatta’s motives, asking if he may be moving to consolidate his power, taking advantage of fear and unrest to do so.

When you fight fire with fire, everything burns. Ample evidence of this fact exists in the country’s recent history. And yet, the cycle continues.

The other cycle that continues is that of travel advisories, a plummeting tourist economy, and Al Shabab’s recruitment of disadvantaged youth. Following threats made a week prior to the attacks on Garissa, the UK and Australian governments issued heightened travel advisories for Kenya. The American government has long held a travel ban on the entire Kenyan coast. Though these advisories are in part an understandable move to protect citizens, they also reflect strategic political moves and take no interest in their devastating effects on tourism.

Once a major industry here, Kenya’s tourist economy now hangs on by its fingernails. Around 48 percent of Kenyan youth are unemployed. The desperation is palpable in places like Lamu, Diani Beach and other once-bustling destinations now filled with guides, boat owners and vendors clamoring to offer their services to the scant handful of tourists to brave travel advisories and terror threats.

Meanwhile, as one friend, a Kenyan resident, told me, Al Shabab outposts in Nairobi will offer 1,000 USD to any young man who wishes to join their forces. This is an unheard of sum of money in a place where a meal costs a couple dollars and most tourist attractions between five and ten.

Al-Shabab has committed countless acts of terror, brutal executions and merciless attacks, but the men—and often boys—they recruit (both in Kenya and in Somalia) are not terrorists. They are not criminals. They are not (always) on a religious jihad. Most of them are hungry, poor and desperate.

This does not excuse any act of violence, but it does, I believe, fill in the blank spaces of most media’s black-and-white portrayal of attacks like that of Thursday. In the last three and a half months, I have seen what happens when the tourists don’t come. It is dangerously nearsighted for Western governments to condemn an entire country, or region, to economic ruin in response to attacks in specific places.

Moving past the “danger zone” south of Lamu, police escort in tow, we were the only wazungu (foreigners) we saw traveling that day. Baobab trees thrust newly green arms into the sky in a quirky dance of regeneration, the sun melted into the horizon, and I wished more people would visit this beautiful place, despite the risk—or, perhaps because of it… If the tourists don’t come, the cycle continues; the risk grows.

Life here steps around the fear, around the checkpoints and around the danger, and it goes on. People, like the baobab, thrust new leaves into the sky and try again. As we send our thoughts and love to victims of the Garissa attacks, I sincerely hope we might remember that as well.