Henry Miller & I Think you Need to Stink! 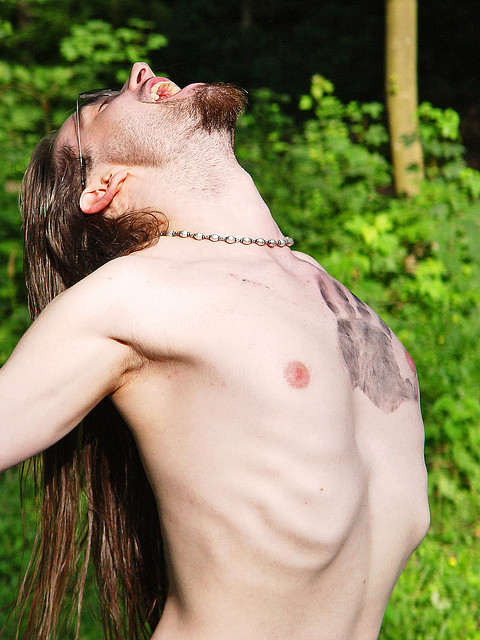 Let us face it, Americans no longer sweat.

Okay, we may perspire in unusual situations or partake of some hobby or sport during which we voluntarily sweat (and thereby feel virtuous), but for the most part we glide dryly from home to car to work to restaurant to school in refrigerated comfort. We exist in an air-conditioned bubble. It has become so ubiquitous that unless it breaks down we barely notice it at all. It just is.

Inside the bubble, we are not only cool, we are clean. Clothes are worn once and washed. Our mammal bodies are showered multiple times per day if we feel the need. Antibacterial soaps swab every surface. We are cleaner than any other humans have ever been. We have practically banished all traces of primate olfactory unpleasantness. What we smell is either nothing at all or some programmed deodorant substitute.

Animals sniff in interest; we sniff only in disdain.

In the pre-war America of 1940 and 1941, Henry Miller traveled in his native land and wrote a book entitled The Air-Conditioned Nightmare. In it he portrayed an America that was becoming estranged from the natural world by the technologies of comfort and an obsession with cleanliness. I wonder what he would think of it today?

He took air-conditioning in particular as a synecdoche of a technology that would distance us from the real world. It would sequester us behind glass and force the world outside where it could only be viewed and we could only view it. No immediate sensory experience other than the visual would be available. Thus a sensory intimacy with nature that had evolved along with us over millions of years would be broken.

In this new relationship, sight, vision, the image would become ever more dominate. Sound would be secondary and it would mainly be chosen or provided rather than natural sound. The tactile and olfactory senses, in particular, would atrophy diminishing of our perception as 3/5’s of our potential knowledge of existence became less accessible.

We would no longer smell, touch or taste like our ancestors did. We would become, in Miller’s opinion, less human. I would venture, less primate.

He believed that this would necessarily affect us personally and socially. We would become more passive and voyeuristic, sound would become programmed background noise, fewer smells would be acceptable, food would become less varied as extremes of taste declined.

In the end, he believed that repugnance would naturally accompany this sensual decrease. We would try to make our own bodies, homes, workspaces, even sex as clean and odorless and inoffensive as possible. The world would become less of a place to live and more of a place to inhabit. The lush anarchic grossness of nature would be banished from our lives and replaced with inoffensive, acceptable substitutes especially made for us to consume.

To a large degree, Miller’s nightmare—written when air-conditioning was found in a few motels and theaters—has become our reality as we have cooled, deodorized and cleaned ourselves into a state of national homogeneity.

Think of McDonald’s as the most comprehensive example of what Miller saw heading our way:

Cooled to a constant temperature with acceptably indiscernible music playing in the background, uniformed employees recite prepared scripts as you order bland food always prepared exactly the same way and then sit down at an antiseptically cleaned plastic table to eat as quickly as possible while you look through the plate glass out of the air-conditioning into the world as it used to be.

Didn’t realize it was quite that bad did you?

So I (and I am willing to speak for Henry here) suggest breaking the bubble.

1. Drive across Arizona in July with your windows down; sleep anointed by humidity with them open.

2. Work hard, outside and open your pores. Let the sweat slither down your back.

3. Make love on a hot, humid summer day. Let your sweat and your lover’s flow together until you are one primordial salty ocean; then relax, spent, in your own delectable fluids, slippery and succulent. What really feels better than cooling off in your own sweat after (shall we say) hot sex? Admit it.

4. And get dirty! Go crazy and stay dirty for a while. Wear the same clothes a few times as your remote (circa pre-WWII) ancestors did for want of central heat and running hot water. This disgusts you? Are you implying great-grandma was a pig?

5. As graduate study you might even try going without a shower for a whole day! Billions do this regularly and not just for one day.

6. For postgraduate work, visit any third world country. Go for long walks following your nose. It will twitch gloriously as it is caressed and assaulted by unknown odors climbing the ladder from putrefaction to perfume.

Finally, consider how many of the world’s resources are required to keep us all so cool, clean and odor free. That really stinks.

5 Quick Ways to Connect with Nature in the Concrete Jungle.