How I Found my Tribe & Survived without One. {Adult} 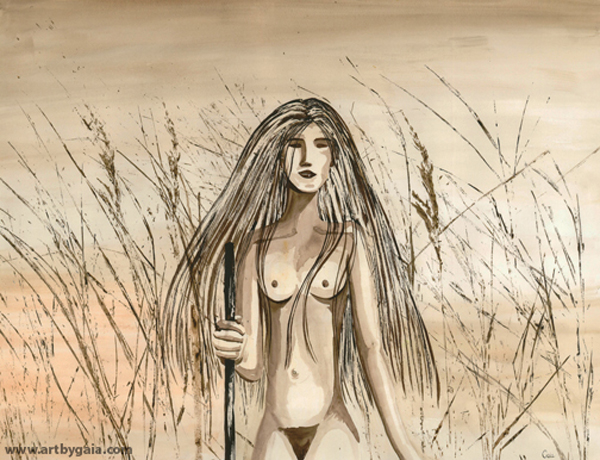 Finding my tribe has been a recurring activity.

An orphan at a tender age, I ran loose through my village, searching for something that was as elusive as the promise of spring during a raging winter storm; my deceased mother.

For the most part, I was free to wander the forest and the fields. More often than not, I sat at a gypsy’s fire, listening to hypnotic music and watching lovers dance by the flames, unaware of what heat ran through their veins.

There were cards at the grandmother’s table in the colourful caravan. I knew nothing of tarot then, I knew almost nothing altogether. I was six.

My own grandmother grew frantic as night approached and I was yet to return, the shadows long on the horizon…sometimes I fell asleep and crept home by the light of the moon. I was never afraid of the dark back then.
That was my original tribe. My grandmother, several caravans of gypsies, some neighbors who ignored my theft of eggs from their chicken coops, a young soldier who regaled me with stories of army life (and who I hoped to one day marry) plus a handful of friends my own age.

We were all on the same page. We all knew hardship, we all valued community. I felt safe within that tribe. Kindred, is what they were.

One day, the whole tribe disappeared.

I was on a plane by myself, bound for Canada, off to my new adoptive family that I had yet to meet. Fright of this magnitude was new to me. Being alone was new to me. Who would be my new tribe?

The next 10 years was fraught with a confusing, often starkly abusive encampment with a tribe that I knew from day one I did not belong to. These were strange people who showed me their love in unaccustomed ways. I hung on to the random moments of tenderness, and grimly banked on my approaching teen years as a way to break free from my situation.

Their ways were so foreign to me that I could barely conform. I was not a conformer, anyway. This did not bode well for me. But something of my memories from my original tribe kept me fighting for tomorrow.

In the meantime, I had to become my own tribe.

There was no other way to survive. I nurtured my solitary clan with words I read. I scoured the library for stories about people I could relate to. If I could not find them, I would make them up and write about them. I adopted myself into surrogate tribes.

If I was to tell you that in order to keep myself from jumping off the subway platform, I would imagine that instead of going home, I was going to my adopted family called “The Waltons,” or the folks on “Little House on the Prairie” I would not be telling you anything comical, or actually that strange.

I had to imagine my tribe while I was separated from them. It kept me alive.

But by now I was afraid of the dark. I fought to remember who I was. I’d forgotten my clan’s ways. I was the stranger. I was strange altogether. I thought about things that no one else did. I wanted a life that seemed out of step. I craved a memory so old that I could barely remember it myself.

One day I met a young man who understood my jokes. I recognized something in him that was unexplainable. I knew that he had my children. I knew that they were part of my original tribe. I had to have them. With an instinct stronger than any I had ever known before, I understood that those specific children would have somehow been part of my original tribe. I felt it in my bones.

And indeed, those children, now young women, have brought forth the energy of that time when I knew no fear. They are kindred. We run in the same pack, we howl at the same moon, we dream the same dreams.

I could tell you stories of many who I tried to fit into my tribe or who convinced me that they were the same as me. But there is no fooling the soul. Sooner or later, the true tribe stands clear before you. Sooner or later, you discover that it is better to be alone in a tribe of one than in the midst of an insincere connection.

There is nothing wrong with admitting that you can’t sit at the same fire as the tribe that leaves you empty.

There is nothing wrong with striking out on your own once more.

As years passed, I noticed that I was becoming stronger. I could walk alone. There were hints of my clan, hints of community. I still keep bits here and there, cherished friends, my new partner, my first partner who gifted me my girls; and I still write new members into my tribe with pencil in hand.

One day, I dreamed something that left me in tears. I was walking high above a plain. There were tall grasses and deer down below, but I was stuck on this ridge with no way down. It seemed that it took me years of wandering to climb down from that precipice until I reached a place where a tribe had burned a fire, but the fire was now cold and they were gone.

That was my first vision of a people I had lost.

I subsequently went to see a Shaman who took me on a journey through time. I was finally able to connect with my people. My very first tribe, the one that wandered like nomads over the plains, the long forgotten ones. I emerged from my trance finally knowing who I had belonged to, and who I was.

I finally understood my wandering, inquisitive nature. I finally knew that to be part of my tribe, a person had to be willing to accept me with my quirks; one who needs solitude but also craves a loyal clan of seekers. I was a seeker and looked for others who wanted to know questions more than they needed answers.

If I ever lose my tribe again, I know that I will be alright.

I’ve picked up Tarot as a tool for understanding myself and I’ve released the wild woman who was crying to live outside of me. I’m still afraid of the dark but it’s becoming easier to face it.

Before you choose or find your tribe, choose yourself. Find that place within that resonates with your daily walk. If you can’t walk by your own side, you’ll have difficulties finding others who will accompany you.

Find your tribe in meditation. You might discover that you are part of something ancient that continues to speak to you in dreams and visions. Do not run from your visions. They are teachers about your true self.

You will recognize a tribesman or woman by their ability to accept you as you are. They will be comfortable with your unique nature. They will celebrate your path and not dissuade you from following it. They will encourage you to dream big dreams even if it means that you cannot sit by the same fire anymore.

Your tribe is more than people. It is also the animals you live with, and the animals you identify with as your guides.
You can also find tribal members in the tree and plant kingdom. You might already know some of them—usually we’re attracted to what we “know.” This goes for crystals and places as well.

When I first stepped foot in England, I knew I was home, even though I had been born in Poland. I consider the UK my spiritual home, no doubt from a previous lifetime experience. You may have several places on earth that you’re inexplicably drawn to.

Find your tribe in books. Characters who seem like old friends. Authors who understand the desires of your soul.
Find your “tribe of one” in your journal. Write her story. Your story. The story of where you belong.

No matter where that is or who your tribe is, know that you are always enough.

To my Secret Tribe: How to Leave an Abusive Relationship.