Journey of a Western Hindu. 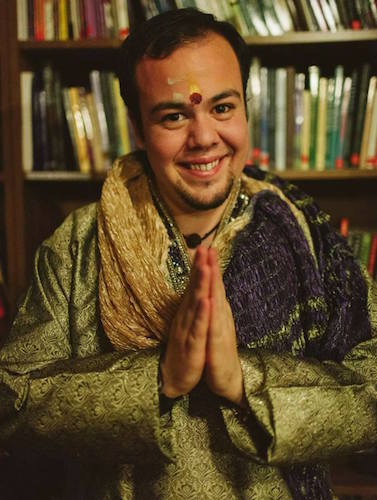 At age 13, I decided to leave the religion of my birth, Christianity, in search of something different.

At the time I had no idea what I was looking for, or where I would find it.

I was simply spurred on by an internal, unquestionable knowing that the relationship between man, God, and the world was very different from what I had previously thought.

Divinity is manifest as the Universe itself. Divinity is the context also in which the content exists. Divinity and man’s true identity is one, and non-different from each other. God is more than a man in the sky condemning us for sins, there must be more to the story.

After having been exposed to books by mystic authors, that was the conclusion I had come to, and that voice simply would not keep quiet. I explored Western Neo-Paganism for most of my teenage years, followed by Buddhism, followed by “spiritual but not religious/New Ageism.”

There is one thing I always noticed in all my searching, and that is each source always credited a Hindu text or teacher for its understanding. Without fail some of the most eye-opening, attention grabbing, paradigm shifting works credited the Vedas, or the Bhagavad Gita, or the Yoga Sutras, or a Hindu guru.

The occasional Rumi reference was thrown in, but the ideas that really re-shaped my outlook came from these Hindu sources. I didn’t understand Hinduism though. As a Westerner I felt very “on the outside looking in” because there was this subtle programming in my mind that said that to follow this tradition, I must share the ethnic identity as well.

I later learned this idea was a total misconception; I could absolutely be a Western Sanatana Dharmi (Hindu). I realized that I had never really learned about Sanatana Dharma, known most commonly in the West as Hinduism, fully. The information was never really presented to me in school, or by any peers, nor by the media whatsoever.

When I was 19 years old, I met a man named Anupam at the Buddhist center where I practiced meditation. He was starting a Bhagavad Gita study group in my town, and I decided to attend. Over the weeks I had studied, I was amazed at the depth and gravity of the insights that poured out from this book. I was also amazed by Anupam himself, as he was constantly striving to put the ideals of the Gita into practice in his day-to-day life, and he had a very spiritual aura about him.

Although he had many degrees and a high paying job with a chemistry firm, he lived extremely modestly. The Gita was his life, Vishnu was his ishta devata, and his every waking moment was a sadhana. After learning from him for a few months, he left for California and I continued to help teach the study groups after his departure. After a while, my schedule became more hectic, and I had to discontinue the study groups.

I intensified my own study of the Upanishads and Gita on my own whenever I could, but my path on Sanatana Dharma was still not fully concrete until 2013. It was an incredibly difficult year with many health issues resulting in hospitalization, and then a car accident where I broke my wrist and fractured my pelvis in several places. This was all coupled with financial issues. During this time of immense pressure, I found a new equanimity I had not before known.

In my meditations I began having intense realizations where, I feel, I began to experientially perceive some the truths that used to only be intellectual ideas I had read about. These series of realizations led me to firmly dedicate myself to the path of Sanatana Dharma. I began to study the Master Course under the auspices of Kauai’s Hindu Monastery, as well as take courses and study programs from Arsha Vidya Gurukulam. It is my mission to spread awareness of Sanatana Dharma in my community, and have opportunities to share the gifts that it has given me with others.

So how is Hinduism different from from the other paths I was on, and what made it stand out? When I considered myself “spiritual but not religious,” I expected anything considered to be a “religion” to be restrictive and moralistic. Just a list of do’s and dont’s laid down by someone at some far off place in history. I felt that to call myself any one religion in particular was somehow limiting. There were a series of experiences that I had in meditation that changed all of that forever.

I began to see those things that I experienced, were talked about in great detail in the various Hindu shastras (scriptures) in a way that no other path on Earth I had studied had laid it down. I began to realize that the Hindu Dharma was a process, a science, and a particular high vision of life, rather than a simple philosophy and belief system. The Hindu Dharma is in no way limiting of one’s freedom to explore and inquire, in fact, it urges you to!

I also found that the Hindu Dharma is a complex living system of practices designed to help a person grow into their fullest potential, and learning how to be in harmony with eternal Natural Law (Sanatana Dharma). Many in the West have taken individual disciplines from the Hindu Dharma and have left the rest, like Hatha Yoga, meditiation, and so on. I found that, although these disciplines can be effective on their own, they are 100 times more effective when included in the entire system of Sanatana Dharma (Hindu Dharma).

All of the systems of Yoga, Meditation, Scriptural practice, Contemplation, Devotion, and so on, are designed to work together, in tandem with each other, to help the person on the path to moksha (freedom from suffering/bondage). The Hindu Dharma has such diversity, that one is free to pick whichever avenue to spiritual unfoldment suits him or her, often with guidance of a Guru and a community of peers. It is freedom with responsibility.

The Hindu is free, and strives to use this freedom to uplift self and others, to service the community, and to come to the realization of Divinity within, and within every living thing.

A Brief Explanation of Hinduism