The 25 Most Kick-A** Pioneering Things Ever Said by Emma Watson. This is a big week for 25-year-old Emma Watson.

She turned 25 and she was named one of Time Magazine’s 100 most influential people.

Notably Watson was featured as a pioneer and not an artist. Emma Watson is also a UN goodwill ambassador. As a bookworm, I have a bookcrush on Hermione Granger and as an educator and advocate, I am proud that Ms. Watson is speaking for feminism, change and women in educator.

In honor of these two great achievements and her truly groundbreaking efforts in the HeforShe campaign to create momentum and movement around modern feminism, here are the 25 revolutionary calls to action from our visionary vanguard.

1. When she spoke to the UN with an amazing call to action for HeforShe.

2. “I don’t want other people to decide who I am. I want to decide that for myself.”

3. “I’m a feminist, but I think that romance has been taken away a bit for my generation. I think what people connect with in novels is this idea of an overpowering, encompassing love—and it being more important and special than anything and everything else.”

5. “Feminism is not here to dictate to you. It’s not prescriptive, it’s not dogmatic. All we are here to do is give you a choice. If you want to run for Prime Minister, you can. If you don’t, that’s wonderful, too. Shave your armpits, don’t shave them, wear flats one day, heels the next. These things are so irrelevant and surface to what it is all really about, and I wish people wouldn’t get caught up in that.”

6. “I was confused being called bossy.”

7. I decided I was a feminist and this seems uncomplicated me.

9. “As a younger woman, that pressure got me down, but I’ve made my peace with it. With airbrushing and digital manipulation, fashion can project an unobtainable image that’s dangerously unhealthy. I’m excited about the ageing process. I’m more interested in women who aren’t perfect. They’re more compelling.”

10. “I don’t want the fear of failure to stop me from doing what I really care about.”

11. “I have felt for the last 10 years I have had this battle; I’ve been fighting so hard to have an education. It’s been this uphill struggle. I was Warner Bros’ pain in the butt. I was their scheduling conflict. I was the one who made life difficult.”

12. “I’m not going to school just for the academics—I wanted to share ideas, to be around people who are passionate about learning.”

13. “All I can do is follow my instincts, because I’ll never please everyone.”

14. “Becoming yourself is really hard and confusing, and it’s a process. I was completely the eager beaver in school, I was the girl in the front of the class who was the first person to put her hand up, and it’s often not cool to be the person that puts themself out there, and I’ve often gotten teased mercilessly, but I found that ultimately if you truly pour your heart into what you believe in—even if it makes you vulnerable—amazing things can and will happen.”

15. “When I started dating I had this kind of Romeo and Juliet, fateful romantic idea about love which was almost that you were a victim and there was a lot of pain involved and that was how it should be. Shakespeare said the course of true love never did run smooth, and I had this sense that it had to be painful. It was such a revelation […] to realize that it shouldn’t be that way and that you get to choose who you love and who you decide to give your heart to.”It sounds like a cliché but I also learned that you’re not going to fall for the right person until you really love yourself and feel good about how you are. Well, that was revelatory to me.”

16. “There’s nothing wrong with being afraid. It’s not the absence of fear; it’s overcoming it. Sometimes you’ve got to blast through and have faith.”

17. “Girls should never be afraid to be smart.”

18. “I have realized that fighting for women’s rights has too often become synonymous with man-hating. If there is one thing I know for certain, it is that this has to stop.”

20. “It’s not the word [feminism] that it’s important. It’s the idea and ambition behind it.”

22. “When at 15, my girlfriends started dropping out of their beloved sports teams, because they didn’t want to appear muscle-y, when at 18, my male friends were unable to express their feelings, I decided that I was a feminist.”

23. “Don’t let anyone tell you what you can and can’t do or achieve. Do what you want to do and be who you want to be. Just encourage and include each other, don’t ostracize the gender in front of you.”

25. “I feel like young girls are told this whole idea that they have to be this kind of princess and be all delicate and fragile and that’s bullshit. I identify much more with the idea of being a warrior and being a fighter.”

Bonus: That she is amazing support to people on social media. 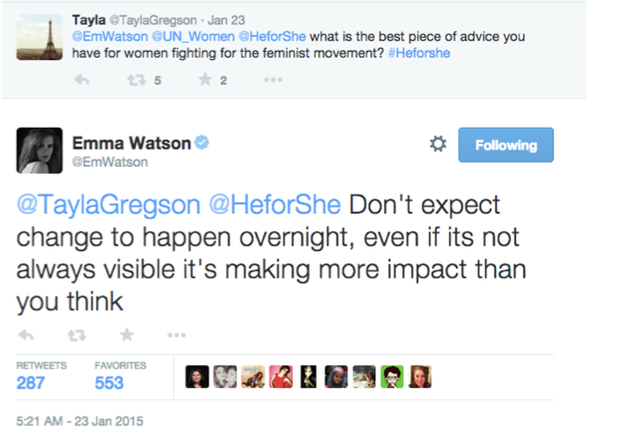 I am proud to follow and be inspired by this kick ass pioneer and forever glad, proud and excited that she is speaking for girls and boys.