When I was twenty-two, all skin and bones and spiritual ambition, I found myself in a small room of yogis, crouched together on a winter Friday night, trying to do some yoga.

We were doing an Anusara immersion, back when that was a thing, with the hopes of steeping ourselves in the practice and philosophy, all of us like little tea bags who had just hopped into boiling water.

I was a weakling then. My skinny arms and legs were, well, skinny, and not much else. Boney? Yes. With extraordinarily open hamstrings and shoulders and a bendy lumbar, I was all stretch and no strength.

And so, that Friday night, as the practice approached bakasana, I tried and teetered and tottered on my hands. My teacher said simply, “Cait, you can, Shakti can, you can.” (The implication here is lining up with Tantric philosophy…that we are all embodiment of the divine and therefore I was capable of anything.)

And that was it. I flew. I f*cking flew in crow pose and never looked back.

As the years progressed, my practice developed. I became one of those yoga goddess-y teachers, at least aesthetically.

But I was still suffering.

Let’s backtrack. On that first night of practicing crow, I was in deep on my third round of anorexia. My relationship with food and my body is long, complicated, textbook, tragic, and triumphant all at once. But here are the basics: I first began playing with obsession and restriction at twelve; in my teens I binged; at nineteen, I lost quite a lot of weight and the old habit kicked back in like riding a bike.

I’m great at counting and ruminating. I’m excellent at hiding. I have a weird and constant craving for all nuts and especially nut butters.

And despite all my yogi training, I am not good at acceptance.

Back on that first night of crow flight, when I was twenty-two, I was anorexic. That was really the tail-end; following my next break up a few months later I began bingeing on tahini in my tiny Boston pantry. Still, I remained thin, and took on an incredibly healthy looking aesthetic in the following years, perhaps the result of yoga, biking, a generally healthy diet.

Minus the daily bingeing. Minus the obsessing.

I was a size four through most of my twenties, and never truly happy with my body, although I was acutely aware of the privilege and envy it allowed me. All those fun and twisty and flying poses?

(Um, when can I be alone with peanut butter? Repeat times twenty.)

You’re seeing the collapse of my Eden, right? Last year, in 2014, I felt my metabolism shift. I literally felt it die within me. I watched the weight pile on as my cortisol levels skyrocketed, and there was nothing to be done.

No switch could flip. All I could do was deny, cry, and eat. Like always.

My practice waned. In the deep darkness that was my sadness, my body rarely felt the joy of my yoga practice. My body could no longer do what it could only a short time ago. I became frustrated, angry, more hateful towards my sweet self. It felt better to work out too hard, continue to increase my stress levels, and ultimately make the problem worse.

It felt better to fight.

There is a kind of mindfulness and acceptance-based therapy called exposure therapy. In session, patients are exposed to what they fear most: knives, snakes, needles.

I feared being fat.

In less than a year, I went from a size 4 to a size 14. And while I do not presently believe that I am fat, or in any way unhealthy or morbidly obese, that initial jump absolutely qualified as exposure therapy for me. I was exposed to a person who could not headstand with ease. A person whose biceps and triceps were not visually distinguishable from one another.

Shockingly, I lived. I survived.

And then, something magical happened: I stopped bingeing.

I’m not sure how it happened. I had spent years of therapy working on navigating the abyss of my personal history, thoughts, emotions, with no success. I had a few hormonal and metabolic imbalances that I began to supplement, and I believe that helped immensely in putting my work into practice. For the first time, I was able to have real and honest connection with my body, to respect its limits, and another shocker, to love it.

Just as it was.

I haven’t lost weight. It’s been over six months, and my everyday headspace has radically changed while the physical landscape of my body remains. And that’s okay.

What is interesting is my practice evolution. It’s been a huge struggle for me to keep a practice going while adapting to my new body and life sans overwhelming obsession.

Without obsession, consistency is difficult.

Practice, then, relies on me dedicating myself to yoga for the love of it. For the seva to myself.

To enjoy my body in it’s present tense.

In another, rather close by neighborhood of my life, I am in graduate school for occupational therapy. I’m specifically interested in chronic pain. From a therapeutic perspective, yoga is absolutely one of the best activities to treat pain of any kind, mostly because it fluffs up the disks in between one’s vertebrae and promotes circulation of cerebrospinal fluid, which bathes your brain and nervous system in good times. Seriously, though, it does.

When I do not practice, I get cranky because my spine literally feels compressed. And I’m not exaggerating, either; no matter what I do, nothing touches a 60-90 minute practice. I remain cranky, compressed.

A door waiting to be opened.

And so, I’ve made the executive decision to practice anyway. To accept my body for its size and abilities and celebrate the whole thing. My history.

To let every practice be a celebration of my existence.

That whole “Shakti can” business stuck with me. Earlier this year, I had it tattooed on my left wrist. Shakti can. I see it all the time.

And so in this way, my yoga is a part of me, and I make more sense when I am with my yoga.

The Yoga of (My) Body Hatred. 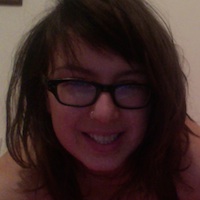