Defying Cancer & Presence: What I learned “Cryaking” Down the Tarkio River. 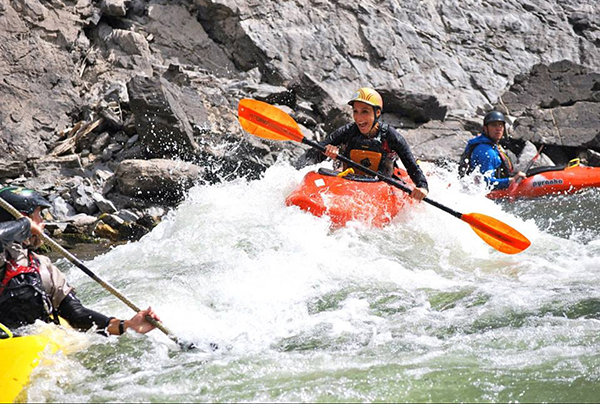 “Where are you?”  Sweet D calmly asked, as tears streamed down my face in the middle of my panic attack.

It was obviously the wrong answer, because he asked again in an even calmer, gentler way:

“Where are you, right now?”

“On some river!” I barked back, not interested in his silly question.

Again the wrong answer. “No, right now, you are right here.”

I was in fact sitting in a kayak on the Tarkio River in Montana about to go down a Class 4 rapid, and I was terrified.

The guides had become so used to my hyperventilating and crying before each rapid they’d termed it “cryaking.”

The program was an outdoor adventure experience designed to “empower cancer survivors to live beyond their diagnosis and defy their cancer.”

When I initially signed up, the camp was a year away. But as the date got closer, the idea of kayaking down the roiling river filled me with dread. Alas, before long I was on a plane to Montana, about to meet eleven other cancer survivors to begin a week of something I had convinced myself would be horrible.

The first night, all the participants chatted happily, excited for the next day’s adventure. I, on the other hand, was silent, overcome with fear and nervous anticipation.

The next morning we geared up and as we pushed off from the shore, it happened…the first of what I later learned were panic attacks. I started shaking, crying and struggling to catch my breath. One of the guides referred to as “Sweet D” paddled over to help me, and I held onto his boat while we floated to another calm spot down the river.

“You beat cancer and you can certainly conquer this river,” he encouraged.

But I was still terrified, especially because in the very first hour, we would be facing the part I had been most dreading…a wet exit! This meant tipping over, pulling off your “skirt” and pushing out of your boat to the surface. I was sure I would get stuck under the kayak, not be able to pull my skirt off in time and drown.

With infinite patience, Sweet D finally convinced me to let him tip me over. We practiced until he was sure I was fairly proficient and wouldn’t panic in an actual rapid. I didn’t find out until the camp was over that Sweet D was actually quite famous in the kayak world and had been featured in a documentary about making a first descent down the extremely dangerous Yarlung Tsangpo River in Tibet (In kayaking parlance, making a first descent means you are the first person ever to successfully kayak a particular river or portion of a river).

To me though, Sweet D was just the guy who was going to keep me alive.

With Sweet D’s patient coaching, the days went by and so did the rapids—but the anxiety never subsided because each day was more challenging than the last. On the final day, we faced the most difficult rapids of the week. Sweet D gathered the kayakers around. “If anyone feels that they don’t have complete control of their boat, you can opt out of this rapid. It’s extremely rough and I need you to feel confident.”

That was all I needed to hear. I had had enough. Over the course of the week I had pushed myself further than I thought possible, but I’d finally reached my limit. Sobbing as I did so, I opted out.

I kayaked over to the three women whom I had become close to during the week to tell them my decision. They weren’t having it. “You came here to face your fears, and this is the time,” said P.W., and the rest agreed.

They were right. No matter what the consequences, regret was not something I could live with.

The river consisted of many turns so we couldn’t see what was ahead of us. But with two guides on either side shouting advice through the waves, I somehow made it down the entire rapid without flipping.

But the day wasn’t over. We still had our “graduation” run which would be the first rapid I would have to face completely on my own.

As I approached the top of the rapid, the hyperventilating began and I almost fainted from dizziness. I reminded myself of all of Sweet D’s wisdom, and to be present. I took several deep breaths and headed straight into the rapid.

My heart raced but my concentration on the waves ahead was so intense that I forgot to be scared. I was truly living in the moment, breath-by-breath, stroke-by-stroke.

Adrenaline coursed through my body as I paddled hard through huge waves crashing into my face. My body was calm, feeling each muscle working together to pull the oar through the water. There was a peacefulness that was strange considering how terrified I’d been all week, but now there was a calmness leading me from one moment to the next.

Rather than trying to control the river, I worked with it. For those two minutes, I was absolutely one hundred percent present, because I had to be.

Instead of rushing waves at the bottom of the rapid, all I heard was huge cheers from my fellow campers and staff. I pumped my oar in the air like a hero. I had had to dig very deep for my courage, but I found it. I had done so with the steadfast encouragement of my new friends, all the while learning to believe in myself.

Twelve years after my cancer diagnosis, I feel as though I have defied cancer, but being present is something I’ve always struggled with. On the river that day I truly internalized for the first time what it meant to “be present.”

At the beginning of camp, Sweet D told us, “You have to be big enough, to be small enough, to let the world be awesome, and it will.” And it is.