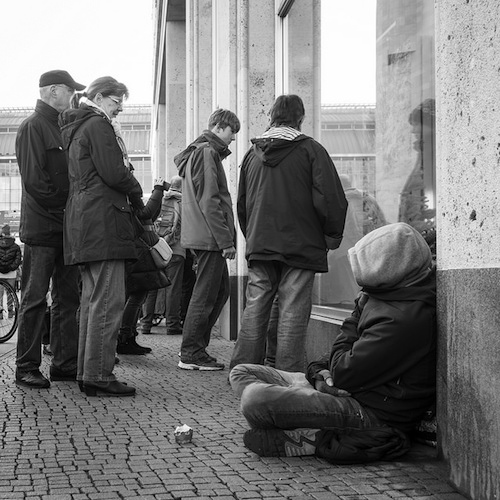 The bearded man sitting on the sidewalk didn’t look hungry.

In fact, he looked rather well fed. A small dog, probably a Cairn Terrier, alert and friendly, sat by his side. The hand-lettered sign, fashioned from a dirty piece of cardboard, said only “hungry” and sat beside a super-sized plastic cup.

The infrequent sound of change hitting the bottom of a cup netted the donor a sincere, if quiet, “God bless you.” If anyone had been keeping track of those who passed by without so much as a glance, it would have been easy to believe the man and his dog were just occasional flashes of reality bursting through from another dimension.

As a young man stooped to drop a five-dollar bill into the man’s cup his companion upbraided him. Neither broke his stride as they headed for the train station.

“Dude, a five dollar bill? Seriously? That guy has a dog. If he can feed a dog he can feed himself.”

Michael didn’t take the bait. He had no expectation Kevin would be swayed.

“Seriously, Michael, why give money to a guy who will probably spend it on liquor?”

He had heard it all before. In fact, he had heard it several times in the last few weeks. Michael didn’t remember when he had seen the man and his dog. Actually, he thought he had seen the dog first; it reminded him of a childhood family pet. Michael also couldn’t remember when or why he had first decided to drop a few coins into the man’s cup. Maybe it was the dog. But whatever the time or reason, Michael new it had felt awkward the first time and he had avoided eye contact with the man. He still did.

On the first day he had offered the man a few pieces of change, Kevin had objected with almost as much vigor as he had shown over the five-dollar bill.

“These people are everywhere man. One of them sees you start giving another one money and pretty soon they will be all over you.”

Kevin had something of a point. People like the man with the dog were everywhere in Chicago. Some were quiet. Some were aggressive. They shared the sidewalks with commuters, street performers, and even lay preachers admonishing sinners that Jesus would soon return and that everyone should repent of his sins.

Along with the noise they made, the sirens, horns and trains, Michael thought of The Loop, Chicago’s central business district, as a symphony of sights, sounds and smells that might have the power to make people disappear. Disappearing into the streets, getting lost in his own thoughts, was something he enjoyed, even when he walked alongside his friend.

“Are you even listening?”

After that night Kevin gave up. He had noticed that Michael no longer pulled money from his wallet to offer the man with the dog. It appeared he now kept a few tightly wrapped bills in his pocket allowing them to avoid interrupting the flow of pedestrian traffic along State Street. Midwesterners were more patient than many other urban commuters, but only to a point.

For several weeks the men played their roles in their curbside drama. But tonight they had stopped for drinks before heading to the train. As Michael approached the man and his dog he reached into his pocket.

“Damn. Empty.” He whispered to himself. He pulled out his wallet and opened it to find only a single one hundred dollar bill.

“You are not gonna give that guy a Benjamin. No way, man. If he tries to spend it people will think he stole.  Come on, Michael, we’re gonna miss the train.”

Michael wasn’t listening to Kevin. He was too busy negotiating with himself about the wisdom of parting with such a large sum. By the time they reached the man he had removed the bill. As he bent to place it in the cup, the man, sitting cross-legged before him spoke.

“Thank you sir. I’m glad I could help you,” came the voice of a man who had spent too many nights in the cold.

“What?” Michael thought he had misheard the man, but was nonetheless indignant.

“Man we gotta go. We’re gonna miss the train.”  Kevin was now a distance ahead. He had not slowed to witness Michael’s foolishness. He couldn’t bear it.

Michael considered removing the bill from the man’s cup but Kevin’s plea had interrupted that idea. He trotted toward Kevin now even as he glanced back at the man who returned Michael’s look with a nod. As the man dissolved into the crowd closing behind them Michael considered sharing his protest with Kevin, but thought better of it.

For several nights after, Michael looked for the bearded man he now called “Hundred Dollar Bill.” But the man appeared to have given up his station after that night. No one had filled the spot, which was unusual, he thought. But why would he think it was unusual? He didn’t really know the habits of these people. Maybe the man had died and there was a code about such things. Michael found himself concerned for the man. He also admitted to himself he was also concerned about the dog. What had happened to them? His concern annoyed him a bit. The man had said he was glad he could help me. Good grief.

At first, he had wanted to find “Bill” and make it clear that it was he, Michael, that was doing the helping. But with each night that had passed the annoyance faded and had now resolved into unsettled concern. How could this man he had really never seen until that final night, never really looked at, have come to occupy his thoughts? This dirty bearded man and the dog occupied his thoughts like a ghost. But you don’t see ghosts.  Not really. They may be there. But no one really sees them do they?

Walking down after that night was never the same. Michael saw them everywhere. They weren’t invisible.  They weren’t ghosts. When he saw the woman with the sign that said, “I’m just hungry,” Michael realized what the man meant when he said he was glad he could help Michael. Then Michael wondered what else, or who else, he had not seen. He reached into his pocket then placed several loose bills into the woman’s hand. He looked her directly in the eye and said a sincere, if quiet, “God bless you.”

Everything we do as Parents Comes down to This.