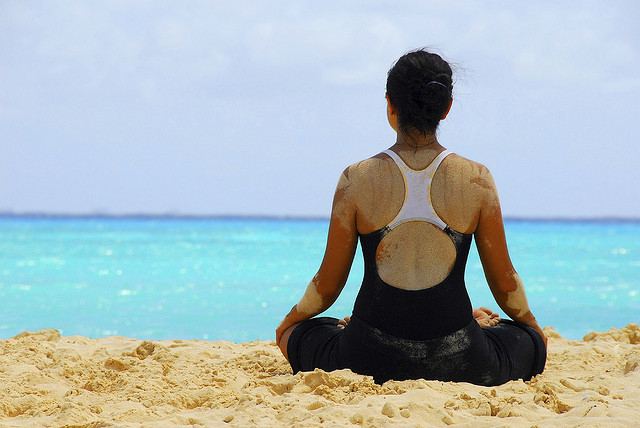 In case you missed the latest yoga scandal, here it is in a nutshell:

The UK-based Yoga Magazine has come under attack for “encouraging an eating disorder.” In the May 2015 edition of the magazine, a reader asks a question about an esoteric technique they stumbled across in an old yoga book from the 1950s. The Tiger—which I had never heard of before—is called an internal cleansing exercise that “gives the body a helping hand to remove any foods and liquids it does not require.” If practiced at least once a week, user will “notice a difference in the shape of [the] abdomen and hips; [the] sexual organs and back will feel stronger and your posture and stamina will improve.”

So, how exactly does one perform this beneficial technique? Basically, by sticking a finger down the throat and vomiting. If this sounds an awful lot like bulimia to you, you’re not alone.

While two charities which specialize in calling awareness to eating disorders have already slammed the magazine for running the piece, representatives for Yoga Magazine defended their decision by saying they were only providing information about a legitimate technique.

Regardless of whether or not Yoga Magazine should have run the piece, the controversy brings to light a very uncomfortable truth that many in the yoga community are loathe to admit and that is that many of its members have eating disorders.

While some may find that surprising, especially since yoga—with its emphasis on acceptances and holistic thinking—seems to be the antithesis of what is associated with eating disorders, many of us who are long time practitioners and/or instructors have a lot of anecdotal tales about students with suspected or confirmed eating disorders.

As one anonymous instructor and recovering anorexia is quoted as saying in a May 11, 2015 article that appeared in The Daily Mail:

“I can spot an ANA from a mile off. They work harder than they should. They are obsessed. They push. They don’t chill. They go to Hot Yoga classes five times a week and they are just masking their s*** and using it as an excuse to burn up calories they don’t have to spare.”

Indeed, a September 2014 article that appeared in Yoga Journal cited a study in the International Journal of Eating Disorders  which “found yoga students to be at equal or greater risk than the general population” for eating disorders. While yoga isn’t necessarily the problem, some of the very features that one associates with yoga such as discipline and self-control may very well appeal to someone with an eating disorder.

Plus, while yoga in theory really isn’t about the physical practice, it sure is hard to say that it isn’t marketed that way in the West. For those wanting proof, just think of the stereotype of the “typical” person who practices yoga in the West: she is, more often than not, young, white, and very thin. The same is true for yoga instructors.

I’ve even personally been told more than once that I didn’t look like a “typical” instructor given that although I am thin, I am not not the willowy beanpole that most envision when they hear the term yoga instructor.

As I shared in the past, my initial attraction to yoga had everything to do with the physical and not the spiritual. I am hardly alone in this.

When I have asked students what attracted them to yoga, “fitness” is a very common reply. While some may cite this as “shallow” and against the true spirit of yoga, it’s really hard to blame those who admit that they after the physical rewards a regular practice can offer when “yoga body” is part of the lexicon.

In any case, I happen to think it’s a good thing that the reality of eating disorders in the yoga community is finally being brought out into the open rather than being ignored. Yoga instructors may not be medical or psychological professionals and while I would never suggest anyone other a professional attempt to help someone suffering an eating disorder, being aware of the signs of one can be helpful in order to steer them in the proper direction.

Ironically, yoga can be a helpful tool in helping someone conquer an eating disorder. In addition to the science suggesting that yoga can help, at the very least  it can teach us the importance of compassion towards our bodies as well as the fact that there is no such thing as perfection whether it be the perfect practice or perfect body. Rather, we are fine just the way we are.