The Sky, My Imagination, The Practice & Me. 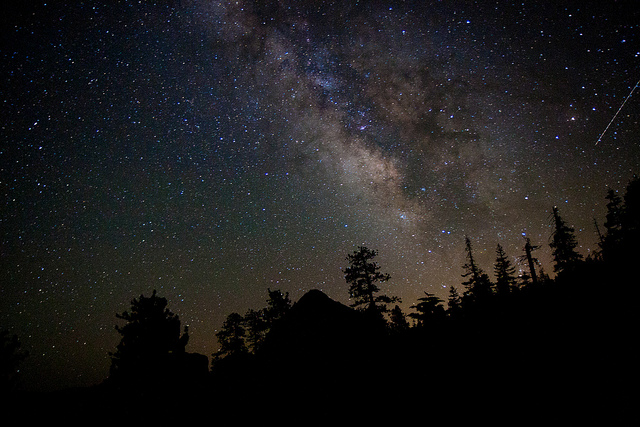 “We are stardust / Billion year old carbon / We are golden”

I’ve been looking at the sky since I was a little girl.

I look up when I leave the house in the morning, and I look up when I arrive home in the evening. And all throughout the day, all I have to do is look out the window. Our offices occupy the top floor of a building, and so I get to work right in the sky!

Really, if it were possible to keep my eyes open, I’d watch the stars all night.

There is some kind of tie between yoga and the heavens. It’s taken me a while to figure this out, but there seems to be a connection between the practice and what’s going on up there. This seems to be what grounds me.

If I were to try to put this into words, I’d say the sky is limitless, and when I move on the mat, I feel limitless, too.

And the moon is a part of this, too. I follow the moon with an app on my phone and with a moon dial on my clock. I know when it’s full or new or waxing or waning. And the yogis around me know this, too, especially those who practice Mysore, the disciplined Ashtanga practice that starts at five o’clock in the morning.

For them, moon days are days of rest. When there’s a new moon or a full moon, there’s no practice, and for one friend in particular, that always means pancakes.

I wonder why I’ve got this tie to the sky. And I wonder if it’s something that’s inherent in everyone, or whether a practice is needed to cultivate it.

There’s actually a place right here on earth that’s trying to measure imagination. It’s called the Imagination Institute, and it’s part of the University of Pennsylvania’s Positive Psychology Center. There, the scientific nature of imagination is being studied in an effort to measure how people flourish, how they optimize their potential to become something more.

The institute’s scientific director, Scott Barry Kaufman, says this: “You’re only limited by the amount of time you have left on this earth.”

Basically, I think what he’s saying is that the sky’s the limit! If we can imagine it, we have a chance to be it.

So maybe what’s in the sky is what’s in us, too. Maybe what’s up there is what enabled Dr. Seuss to rhyme his words and Walt Disney to build his world and Shel Silverstein to plant his giving tree.

Even the scientist and television personality Bill Nye the Science Guy thinks that we are one and the same as the heavens, that we are symbiotic with the sky, and that there’s even stardust in us. “We are the stuff of exploded stars,” he says. “We are therefore at least one way the universe knows itself.”

But not every day is full of sparkling stars and sunshine. I must confess that I don’t always feel so limitless, not even in my practice. And I’m left to wonder what’s happening, because after several years of yoga, I feel I’m supposed to be as expanded as the universe, and I get a little confused when I’m not.

I arrived at practice the other night under heavy skies. All day, the sun and then the moon remained hidden by rain clouds, and somehow I felt hidden, too. As usual, I was concerned for feeling this way, because I depend on my practice to keep me lifted as high as the heavens.

We flowed for a bit and, once we warmed up, the instructor shifted the format. The class turned into more of a workshop, and the architecture of several arm balances and inversions were broken down and built back up. It was a creative and interactive practice, and afterward we sat with our hands in prayer, waiting for the closing.

The room was as quiet and dark as it was outside, save for the twinkling lights that draped the windows like imaginary stars.

The instructor praised us for our efforts that evening.

“It’s good to challenge ourselves as we did tonight,” she said, “and to not let our limited beliefs hold us back from what our bodies can do.”

It was as if she was the director of our own Imagination Institute! Here, she was telling us to look up, to flourish by imagining all that we could do. After all, that’s the only way to land upside down in a handstand or to teeter on one arm in a balance.

Did she even know she was telling us how to access the vast universe that is us?

By the next day, the sun had reappeared, both outside the window and inside of me. And I turned on the computer to do some research. I wanted to read about the stars. And what I found was a quote by Carl Sagan, the astronomer of great and limitless imagination:

“The nitrogen in our DNA, the calcium in our teeth, the iron in our blood, the carbon in our apple pies were made in the interiors of collapsing stars. We are made of star stuff.”

And so I write this for the days when I forget that the stars up there are the same as the ones down here. And this will ground me in the same way as my tie to the sky, forever endless and without limits, as far as the eye can see.