Why I Honor my Boyfriend’s Attraction to Other Women. {Adult Language} 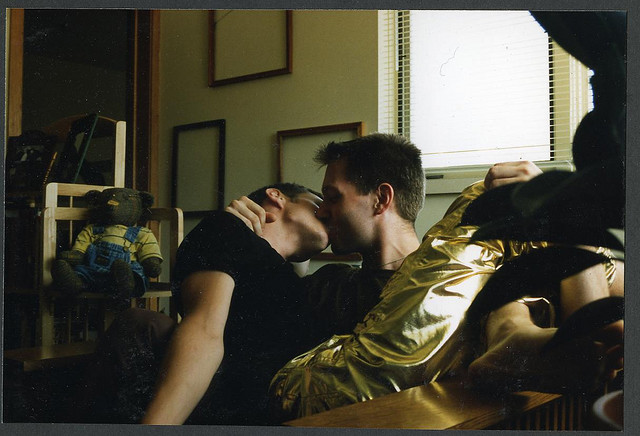 I’m a rebel by nature.

Translate that through to my early twenties after doing a ton of work around my perceptions of commitment, relationships and marriage, the accepted versions of which I felt were complete bull. I dove into almost every kind of relationship imaginable: polyamory, same-sex, open, monogamous, always keeping my relationship with myself my highest priority. I didn’t jump around intentionally. I dipped my feet in the water and explored until I felt my time of exploration in that particular pond had expired.

I believed ultimately my highest work would be “staying” in a relationship when someone challenged me and provoked me in ways that stretched me rather than deflated me. I was equipped to be deflated, and not so excited to be stretched. If I was going to be stretched, I wanted to be the one doing the stretching, not having someone else push my limits.

Fast-forward to today. I am settling in (which will probably always be true) to a monogamous relationship with my partner of almost two years. As we are approaching the birth of our first child together, I find myself tired, huge, distracted and resistant to sex. Not that I don’t think about sex, or desire sex, or feel attracted to my partner or the enticement of other prospects, I’m just not interested in putting in the effort. This inaction is shining a light on the shadow of our relationship but the more it’s exposed, the more I love our shadow.

I refer to our shadow as an entity or emotion that follows us everywhere that most people don’t dare turn around and look down to acknowledge for fear of being taken by it. As I acknowledge this, I see myself being stretched by my relationship, and as I always desired, I am the one doing the stretching.

We live in a society that’s a race to no where and in the process, to make life meaningful, to give us a thrill, we see something we’re attracted to and we have to do one of two things: own it or fuck it. Sometimes both. Before we own it or fuck it, we believe the thing we’re attracted to says something about who we are and we buy into the idea that owning it or fucking it will allow us to keep it and then we’ll be happy. This is an absurd notion.

I honor what I’m about to say in myself and in my partner. Mind you, in all of my self work, I am not immune to jealousy and insecurity so what I’m proposing may not always be an easy pill to swallow, but I do believe it’s a pill worth swallowing.

My partner is attracted to things other than me. His guitar, golf, and yes, other women. I too, am attracted to things other than my partner but that in no way takes away from my attraction for him. He and I share something no other two human beings on the planet have ever shared or will ever share again. We are the only “us” there is that looks and feels and operates the way we do.

When I feel attraction to someone, him or otherwise, my body is lit up! I have a light turned on in me that only I know was merely flickering a moment before. When my partner connects to an attraction, I see the same light turn on in him. I’m attracted to that light! Whether he’s turned on because of me or because of someone else, he’s coming alive and I get to see a part of him that even if the other person sees, they’ll never get to truly know. He can light up a room, but whatever sparked his interest isn’t coming to our house when he’s on fire to share himself. They were just the flip of a switch, not his light.

The same is true for me. Attraction is always going to be in all of our lives and we can deny it or supply it but most of us cannot stand to just sit with it.

This is the practice I’ve come to honor and love. When I sit with my attraction and I don’t have to own it or fuck it, I get to observe it in its wonderment. I don’t taint it with objections or projections. I allow the mystery to come alive in me but I save the sharing of an untold story with the one person I’ve chosen. If I still had to own or fuck everything I was attracted to, I’d still be a lifeless zombie looking for aliveness in all the wrong ways.

I let the relationship of whatever i’m attracted to sit a few inches outside of myself and observe it like two lionesses circling each other except no one ever makes a move. We stare, we come to an understanding of what “is” and once I acknowledge that, I let it be exactly what it is without diving in or running from it.

This, to me, is being truly alive: sitting in the what-is-ness without rejecting it or owning it with meaningless labels.

I trust myself now. In my own self trust, when I watch my partner do his circles with someone else, I can sit back with a slanted eye, a curled up mouth and feel humbled that even in all of this, as he comes alive in the presence of another, he chooses to come home to me, his huge, tired, uninterested-in-sex pregnant partner.

Whatever floats our boats, I know we’re always coming home to the same island to laugh about the ride and I honor the waves that lead us home (even in the form of other men and women) because they shape the foundation of our untouchable dually-created empire that only we will ever truly come to know.

Attraction happens. To deny it in either of us would be like asking the other to cut off a limb. I appreciate all of our limbs, even if we use them to stretch each others insecurities and jealousy. This is our mating dance.

Walk the Talk with Waylon Lewis // Independent Love Suited to a New Generation: